Building security in the current global context is one of the most daunting challenges of our time. Deaths from violent conflict reached at least 157,000 in 2017, more than double the number recorded ten years previously. Human security is deteriorating as the effects of a growing ecological crisis are felt across the world, refugee flows increase and economic inequalities remain extreme.

According to the WJP Rule of Law Index,[1] the global progress towards greater levels of democracy and freedom seen in the 2000s is now being reversed. One explanation for these trends, and for the devastating human and planetary tragedy that they represent, lies in the dominant approach to national and international security.

Around the world strategies, policies and interventions are being carried out in the name of national or international ‘security’ that are actually making life more insecure for many people.

Instead of devising policies that grapple with the requirements of sustainable peace and security, states are opting for responses characterised by three deeply flawed assumptions. The first is that security can be achieved through the consolidation or expansion of political and economic power for a particular state or elite, at the expense of the daily security of other groups. Second, that priority should be accorded to treating the symptoms of insecurity, such as ‘international terrorism’, in isolation from systemic causes, such as economic inequality, social and political marginalisation, climate breakdown and global militarisation; and, third, that security can be achieved by extending control over the strategic environment, principally through military capability, alliances of convenience and restrictions on civil liberties.

Those of us who strive towards a more peaceful and just world must successfully make the case that this approach to national and international security is failing us all.

Because these assumptions dominate the national security strategies of the world’s most economically and militarily powerful states, they have enormous influence on both the specific policy responses to crises such as Somalia, Syria or Yemen and the dynamics of international engagement with multilateral institutions.

Those of us who strive towards a more peaceful and just world must successfully make the case that this approach to national and international security is failing us all. Clearly, its most tragic consequences are felt by civilians caught directly in the line of fire, or in the devastation wreaked by extreme climate events such as Cyclone Idai, but there are consequences for us all. Violence and instability are not confined within the boundaries of states, neither is climate breakdown, and states that, according to the Stockholm Peace Institute,[2] collectively allocate $1.7 trillion every year to military expenditure, but leave substantial proportions of their populations dependent on food banks or at the mercy of climate insecurity, are storing up problems for the future. 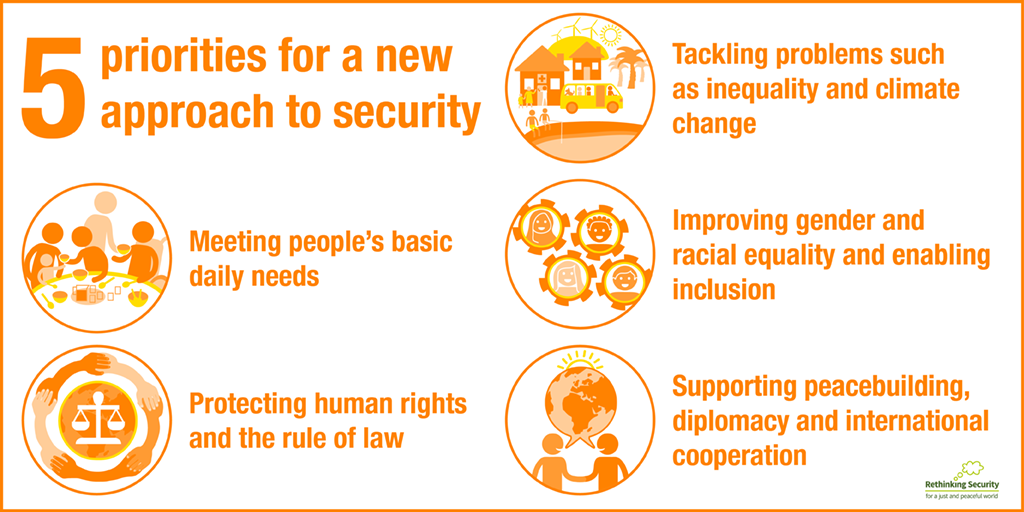 This needs to change. We need a new narrative about security that starts with a commitment to the safety and wellbeing of all, which requires at least five lines of action:

None of these ideas is new. They underpin efforts to rebuild international peace and security in the aftermath of the Second World War. They can be found in the UN’s Human Security Framework, developed from the evidence amassed from societies making transitions away from violent conflict. And in my experience, they can be found in the responses of many individual members of the public to the simple question, ‘What do you need to feel secure?’.

We encourage other foundations to recognise that progress on human rights, humane migration policies, international development and ecological sustainability is intrinsically linked to a shift from the mainstream model of national and international security.

But the will to act on this understanding is currently lacking in many corridors of power. This realisation spurred the formation of Rethinking Security – a network of UK-based NGOs, academics and activists working for a more progressive approach to national and international security. We research and publicise the evidence base that shows how the current approach is failing. We encourage a more critical public debate about what security means, who it is for and how it can be built.  And we engage with political decision-makers, challenging mainstream assumptions and advocating the steps that can be taken to change course.

We are very grateful to the independent foundations that support Rethinking Security to do this work. We appreciate the freedom it has given us to draw attention to the problematic nature of the status quo, and also to experiment with and refine our strategy. We encourage other foundations to recognise that progress on human rights, humane migration policies, international development and ecological sustainability is intrinsically linked to a shift from the mainstream model of national and international security. Philanthropic organisations are well placed to make these connections, support alliances that transcend respective areas of focus and build the momentum needed for catalytic change.