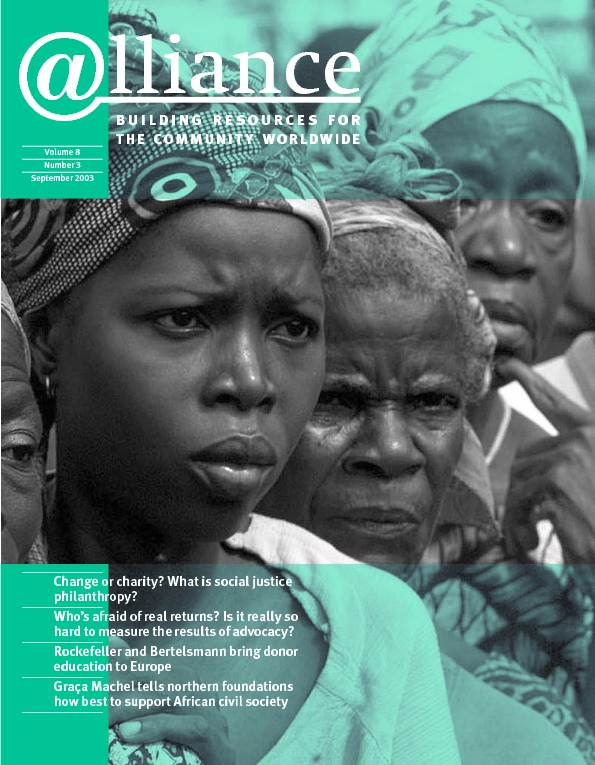 Graça Machel sees strong, independent civil societies, including endowed foundations, as an essential part of the solution to Africa’s problems. Caroline Hartnell talked to her about how northern foundations can best support the growth of African institutions and about the founding of her own organization, Mozambique Foundation for Community Development.

Until now, most of Africa’s development has been dependent on the outside world. So I think independent civil society organizations are actually paramount in the important process of reaffirming and reasserting our Africanness, and at the same time our global citizenship. African solutions cannot emerge without organizations that are not dependent on programme funding and deadlines. An endowed foundation has the possibility of generating its own resources; it needn’t always be dependent on what comes from outside. Because of its closeness to local communities and understanding of the local context, a local foundation can respond to the needs and priorities of communities more effectively. Foundations in Africa are not just grantmakers but also capacity builders, advocates, conveners – convening other donors to look for solutions to pressing issues. The agenda will be set at home and the response will be found at home. So I see foundations, particularly endowed foundations, as strategic instruments that will enable Africans to make their own choices about how Africa meets the challenges of African development.

Because they are themselves independent, foundations will understand how important it is for Africans to develop an independent foundation sector, so I think they should be prepared to help build their endowments – something which government is not prepared to do. Bilateral cooperation can help to develop programmes, but not to build institutions. Working with African foundations and helping them to grow is the only way to go for European and US foundations. We need partnership. Africa has been failing to tell the rest of the world what it has to offer; it has instead presented itself as the weakest link, a recipient of aid. In 10-15 years, we will see solid African organizations shoulder to shoulder with outside foundations. The Europeans and Americans have the resources but can’t do things in Africa. Africans can do things but they have no money.

So are you mainly talking about outside foundations putting money into foundation endowments?

Actually most African foundations don’t even have an endowment yet. I’d like to see outside foundations working with African initiatives to help develop their capacity to raise local money. We in Africa have to start mobilizing African resources, no matter how small the sums are.

Wherever possible, I’d also like to see these outside foundations contributing directly to African endowments. Some, like the Ford Foundation, have already started to develop this sort of strategy. I would urge others to follow their example.

You have talked of thousands of informal networks of African citizens that are really keeping African societies going. Are there ways in which these can be harnessed in a more strategic way to contribute to the development of their countries?

Whether these are community-based initiatives, NGOs, national networks, or sub-regional networks like in southern Africa or east Africa, African foundations should play the role of raising the voice of citizens so they can interact effectively with government, parliament and the judiciary. They also need to help give voice to the agendas of specific interest groups such as disabled people, children and women. Local foundations are better placed to identify the potential of initiatives which may not yet be formal NGOs. If we are to have a varied, vibrant citizens’ movement, foundations must support this range of initiatives.

How did your own Foundation for Community Development start?

We started as a group of 19 people around 1993. We thought it was important to have an independent civil society institution in Mozambique as a component of our country’s independence. We also thought it important to show that we were committed, that we don’t just have ideas. So all of us contributed money to what is now the endowment. We asked friends, people we knew, for money, and we contacted some businesses. We wanted this initiative to send a clear message that Africans, Mozambicans, want to be in charge and in control, because no matter how small the sums of money were, it was coming from Mozambican hands. And then we did mobilize other donors to help.

That’s how we started. Since then, whenever we have someone who is willing to give money without tying it to a specific objective, we ask if they would mind contributing to our endowment, and some people do agree.

I should add that a great deal of effort went into the planning stage. We visited other countries to see how community foundations were working there, and we carried out a huge national consultation. We wanted to validate our idea, and to try to find out whether this was the kind of institution people wanted to have. It was the MacArthur Foundation that gave us a grant for the planning phase.

When you did your consultation, did the ethics of having an endowment in a country like Mozambique where there are such huge pressing needs ever arise? It must be quite a hard thing for people to accept that that amount of money is going to be put away and used in such small amounts each year.

Because it was a new idea, no doubt there were people who were not sure how it was going to work. How can you think in the long term when people need so many things immediately? We had to explain that this was part of a strategy to become stronger and more able to make decisions and choices. We pointed out that even the national budget was heavily subsidized by donations and credit, and we couldn’t continue like this. The government has to struggle to raise resources, and we as citizens have to stand on our own two feet and make decisions and choices on our own. Not having resources doesn’t mean that we don’t have dignity and pride. We made it clear that this was part of recovering our national pride and national liberty.

So you don’t have any mixed feeling about having an endowment?

No, we didn’t have any mixed feelings initially, and today it’s much clearer to everybody because the programmes are there and developing. It has credibility. From the beginning we had a very good board. Of course we had some problems in developing our institution, but in terms of the board and how it is accountable to society, it is credible.

Could you say a little bit about how the Foundation works with national NGOs and grassroots organizations in Mozambique?

Our foundation supports CBOs, NGOs and networks. We see advocacy as crucial, to enable citizens to engage with government and the outside world. We support the institutional development of all types of organization. Sometimes groups ask us to help them register and to train their staff in financial and administrative matters. Sometimes they ask us to help them develop projects. So we do all these things – anything that people feel they need. We group them so it doesn’t become too expensive for us. If we have a group of organizations that need help with financial and administrative training, or with project development or legal advice, we organize someone to provide it. Another thing we do is help groups connect with each other – our country is very big and communication is difficult. Sometimes we enable NGOs to visit other countries (say Zimbabwe, or Brazil because of the common language) so they can exchange experiences and learn from one another.

We have also helped to develop networks. When groups that already know each other get to the point of deciding they want to start a formal network, we support that. In some cases we find a mentor to help them think through how the network might work, and we pay the coordinator’s salary. So there is a variety of ways we help. Our role is to make a contribution wherever we can.

Finally, a question about the Millennium Development Goals. When you spoke at the European Foundation Centre opening plenary, I took what you said to be a reminder that although it would be wonderful to meet the MDGs, that isn’t actually enough. In other words, is it really OK for people in, say, Mozambique to be just lifted out of poverty and live a subsistence life while we sit here with our big cars and holidays and higher education?

The MDGs are just the minimum that we need to achieve if we are to say that we are serious about eradicating poverty. As you know, even if we do, say, succeed in halving illiteracy in adults, we still have a huge task in front of us. The goals defined by the Social Summit in Copenhagen talked about everything and everybody, but they didn’t actually achieve it. The MDGs at least give us a benchmark against which we can measure the minimum that we need to put in place.

Of course we can meet the Goals if the good will is there. As I continually say, there are trillions of dollars out there. We have the capacity to make huge progress as humankind. The only thing missing is the good will. But we have a long way to go – that’s why we have to go for the minimum. Even the [UN] Secretary General has not so far been able to raise the $7 billion needed every year to tackle HIV/AIDS. So unfortunately we go for the minimum to try to overcome this resistance that people have. And people are starting to worry about whether we will achieve even this minimum, because now we are in 2003 and there hasn’t been much done.

I’m not saying that the developing world doesn’t have responsibilities too, because of course we do. We have to put our house in order – that’s why I’m talking very strongly about strengthening civil society in countries like ours. We need to be seen to be developing an environment which is conducive to using our resources better.

The problem in raising resources is about touching people’s hearts, because it’s not much that they need to give. But they don’t feel the pressure, it doesn’t come from within. They don’t feel the urgency, the imperative.

Graça Machel is Chairperson of the Mozambique Foundation for Community Development (Fundação para o Desenvolvimento da Comunidade), which she helped found in the early 1990s. Following Mozambique’s independence in 1975, Ms Machel became Minister of Education and Culture and a member of FRELIMO’s Central Committee. That year, she married Samora Machel, first President of Mozambique, who was killed in a plane crash in 1986. In 1998 she married South African President Nelson Mandela. She works with a variety of organizations in Mozambique and at the UN. She is well known internationally, and renowned throughout the world for her commitment to children’s and women’s rights, education and development.

For more information about the Foundation for Community Development, email fdc@zebra.uem.mz or visit http://www.synergos.org/partners/fdcenglish.htm

Interview – Buzz Schmidt: A public library for the non-profit sector?