Last month CIVICUS released a new index measuring 17 governance, socioeconomic and cultural factors that affect the ability of citizens to participate freely and fully in civil society. The ‘Enabling Environment Index’ (EEI) ranks the environment for civil society in 109 countries.

The EEI aims to generate global dialogue on what constitutes an enabling environment for civil society. The report argues that strengthening the communications infrastructure and addressing economic and gender inequality are vital parts of building a healthy civil society and that tolerant, participative societies and cultures of volunteering and giving are key to a vibrant civil society. 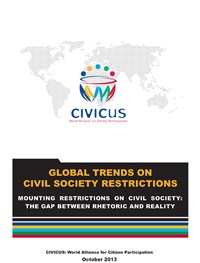 On the national level, the index highlights the factors that prevent civil society from flourishing. In several authoritian countries such as Iran, Zimbabwe and Uzbekistan, the index provides further evidence to support national demands for progressive political and legal reform.

New Zealand tops the list, followed by Canada, Australia, Denmark and Norway while the Democratic Republic of Congo has the worst rated EEI, followed by Uzbekistan, Iran, Burundi and the Gambia.

The report cautions that even the highest ranked countries are far from perfect. In the second highest ranked country, Canada, civil society organizations have been subject to politically motivated audits, restrictive legislation and arbitrary funding cuts over the past two years.

The EEI is complemented by a new report released by CIVICUS in October highlighting more than 400 threats against civil society organizations in over 87 countries in the past two years.