The fourth edition of Blueprint – philanthropy scholar Lucy Bernholz’s iconic industry report – has joined the suite of materials in GrantCraft. Philanthropy and the Social Economy: Blueprint 2013 captures the changing landscape of what it means to use private resources for the public good and outlines how innovations in philanthropy are transforming the ‘social economy’. 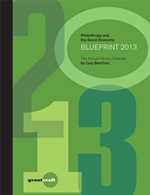 Blueprint provides keen observations about the current landscape, emerging trends, and important breakthroughs likely in the year ahead. In this year’s report, Bernholz includes a scorecard for the previous year’s predictions and a list of 2013 forecasts covering crowdfunding, social impact bonds and political advocacy. She also points out the catchiest philanthropy-related buzzwords of the year and lists possible ‘wildcard’ world events – legislation, scandals or disasters – that have the potential to affect the timing of big shifts in the social economy.

Throughout 2013, Bernholz will explore the ideas in Blueprint, as well as trends in Europe and other regions of the world, in an ongoing conversation at Field Notes, the GrantCraft blog, as well as on her own blog, Philanthropy2173. A European edition of Blueprint is being explored for 2014.

In other GrantCraft news, 31 guides widely used by funders in the US have been translated into Chinese, thanks to a partnership between the Foundation Center and the Beijing-based 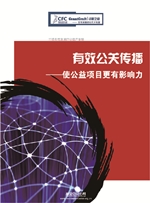 China Foundation Center. Among the 31 titles that have been translated are Communicating for Impact, Funder Collaboratives and Making Measures Work for You.

This project reflects GrantCraft’s aim to benefit funders beyond the US. Its materials have already been translated into six other languages: Arabic, French, German, Japanese, Russian and Spanish. Translations into Portuguese are also under way. In addition, GrantCraft has recently added new guides focused on the practices of European funders, addressing topics such as funding for women and girls, funder collaboration and advocacy.

GrantCraft, originally created by the Ford Foundation, is a joint project of the Foundation Center and the European Foundation Centre which taps the collective knowledge of funders to share insights to help them hone their craft.