‘So far, we had all been relying on Olga to drive development of philanthropy in emerging economies. She knew, she was there, she had the contacts, she was the driver. We all trusted her to set the agenda for what was most needed in whatever country/context PBF was working in. Now, it’s all different.’
Felicitas von Peter

‘Now that we don’t have Olga or PBF, what are we going to do?’ At the end of January, six months after the death of Olga Alexeeva, and with Philanthropy Bridge Foundation (PBF), the organization she had founded a year earlier, about to close, this was the question facing a group of 40 or so people from around the world with whom Olga/PBF had worked or planned to work. 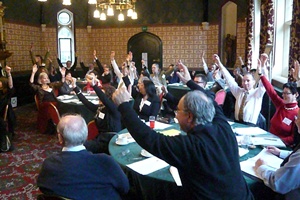 With PBF closing, there would be no organization in place to follow up after the meeting and ensure things happened. It was up to those present to take on the work, if they chose to, and to see it through. In that sense the meeting was extremely unusual. And the results were extraordinary.

By the end of an intensive two days, participants had identified ten separate projects to take forward. Some of them were already under way or in various stages of development, by PBF and others; others were thrown up by the discussion of needs in emerging market countries. All were picked over, constructively criticized, elaborated and scrutinized by a panel of four distinguished ex-funders. As one participant pointed out, they were fleshed out to quite a high degree of specificity. And in every case, several people, either individually or through the institution they represented, committed themselves to working on the project. (Pictured, consensus voting at the meeting.)

In addition, a working group was established to form a new philanthropy bridge network to connect those at the meeting and enable them to share experiences and ideas and continue to build this new field.

These results were far from inevitable. The meeting was designed using ‘open space’, which gives participants the freedom to determine the outcomes they want. Participants could easily have gone home leaving nothing behind but general expressions of goodwill. Instead, they rose to the challenge. Plans were put in place and commitments made to carry them out. During the two days, a number of people remarked that they felt as if Olga were present. The energy, decision and creativity with which those attending worked suggested that, in some way, she was.

Projects to be taken forward

For more information
To download the reports prepared for the meeting and for updates on projects and on the Olga Alexeeva Memorial Fund, visit http://www.philbridge.org.uk (the PBF website will be maintained for up to a year).
Reports are also available from http://www.alliancemagazine.org