Slim to give away to 7.9 billion pesos to healthcare and education 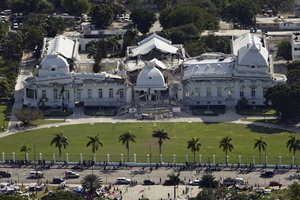 Responses to the Haiti earthquake on 12 January quickly gathered momentum with an outpouring of public and private generosity. President Obama made an initial commitment of $100 million in official US aid within two days of the disaster, and this was followed by an EU pledge of around €137 million for short-term needs and at least €200 million for the medium and longer term. On top of this, following emergency talks in Brussels, EU member states agreed to provide an additional €92 million. Taiwan also donated US$5 million to the stricken island. In a more personal gesture, Taiwanese President Ma Ying-jeou dropped off seven tons of relief for Haiti on his way to a meeting in Honduras on 25 January.

Across Africa, government, church, business and civil society leaders are mobilizing support for an Africa for Haiti Campaign. In South Africa, this will be led by CIVICUS and partners including TrustAfrica, Charities Aid Foundation (CAF) Southern Africa, the NEPAD Business Foundation and the African Women’s Foresight Network.

In the US, in addition to the government’s initial commitment, a number of foundations have pledged sums or set up relief funds, including $4 million from the Open Society Institute, $1.5 million from the Gates Foundation, $1 million from the UN Foundation and $500,000 from Pew Charitable Trusts. The John S and James L Knight Foundation announced a $200,000 grant to international media development group Internews to keep Haiti’s radio stations broadcasting during the recovery period. The Ford Foundation also announced grants totalling $1 million to Oxfam International and Partners in Health; and Atlantic Philanthropies announced grants totalling $500,000 to Global Links and Partners in Health.

Companies, too, have weighed in. UPS, for instance, is donating $1 million in cash and in-kind support to earthquake relief efforts through the UPS Foundation, and Amgen will donate $2 million. The American Red Cross has committed $1 million (the White House is encouraging individual donations through the Red Cross International Response Fund) and AmeriCares $5 million worth of aid. Both the Council on Foundations and the European Foundation Centre have sections on their websites providing news on donor responses and information on how to give for prospective donors.

Individual giving surpasses that for Katrina and tsunami

In the UK, the Disasters Emergency Committee appeal alone had received over £30 million from UK citizens by 22 January. In the US, the American Red Cross had raised $112 million for relief efforts by 18 January, outstripping the amounts received in the same period after Hurricane Katrina and the Indian Ocean tsunami. Overall, according to the Center on Philanthropy at Indiana University and the Mobile Giving Foundation, contributions from individuals, corporations and foundations had topped $517.5 million by 26 January. The Hope for Haiti Now telethon (22 January), organized by actor George Clooney, brought in more than $61 million. Clooney himself, along with fellow actor Leonardo DiCaprio, donated $1 million.

The relief effort has come under criticism from some quarters for the slowness of its response and for what British medical journal The Lancet called ‘jostling’ and ‘corporate preening’ at the expense of the relief effort. This was strenuously denied by DEC chief executive Brendan Gormley. ‘Rather than jostling for position,’ he said, ‘13 major UK aid agencies have come together under our banner to launch the DEC Haiti earthquake appeal to ensure a coherent and united response in our UK fundraising and publicity.’

Penny Lawrence, international director at Oxfam, quoted in UK newspaper The Independent on 24 January, acknowledged that the aid effort had been ‘quite slow’ in getting started, but was running ‘extremely well’. She admitted, however, that the charity was still not getting through to everybody and there were some problems coordinating aid efforts with smaller agencies. Moreover, said aid agencies, the disaster was unprecedented in terms of scale and logistical problems. ‘Haiti’s infrastructure was not great before the earthquake,’ remarked GOAL emergency coordinator Brian Casey, ‘but it was destroyed on 12 January.’

The staff of aid agencies already working in Haiti at the time of the earthquake were themselves among the victims. The United Nations said that 36 of its workers had been confirmed killed in the earthquake and 73 injured, with an additional 160 still missing two days afterwards. Each of Oxfam’s 100 staff members lost relatives. Yolette Etienne, the charity’s Haiti director, helped pull a colleague, who later died, from the rubble before returning home to find her mother dead. She buried her in the garden and was back at work at 8am the following morning.

Growth of donation by text message

One of the features of the fundraising campaigns has been the growing use of text messaging to make donations. Of the $112 million raised by the American Red Cross, $22 million was donated by this means, with some of the major wireless carriers waiving the cost of text messages to encourage donations. Carriers said they were also working to accelerate the flow of funds, since actual transfers by this means can take up to 90 days, according to Art Taylor, president of the Better Business Bureau Wise Giving Alliance. Many others have rushed to promote their cellphone campaigns, including Haiti-born musician Wyclef Jean, who urged his fans on Twitter to donate to his foundation by texting. As at 26 January, an estimated $33 million had been raised by text messaging.

Social media have also played their part in spreading word of the campaigns. Sysomos, an analytics firm in Toronto, estimated that by 18 January, nearly 150,000 posts containing both ‘Haiti’ and ‘Red Cross’ had been sent through Twitter since the earthquake.

Echoing this, former President George Bush, in announcing his partnership with fellow ex-White House incumbent Bill Clinton to raise money for Haiti, urged: ‘I know a lot of people want to send blankets or water … Just send your cash.’ While relief is the immediate priority, some are pointing out that donors should also consider Haiti’s long-term needs. ‘There will be opportunities to give later to other activities that will be just as important,’ said Bennett Weiner of the Wise Giving Alliance.