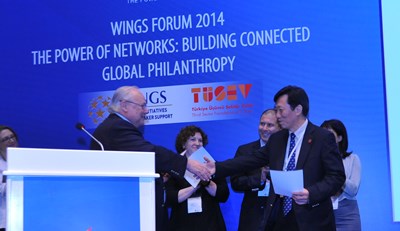 Christopher Harris, chair of the panel of judges, was at the ceremony and presented certificates to all finalists, while Barry Gaberman came on stage to announce the winner. In an interview with Caroline Hartnell, He Daofeng then talked about philanthropy in China and how his work has contributed to developments there.
In choosing He Daofeng, the judges commended him for ‘his significant, creative, far-reaching and, at times, courageous contributions to expanding the field of Chinese philanthropy and putting it on a trajectory to support progressive social change’.
While the judges were unanimous in their choice of He Daofeng as winner, they also commented ‘how difficult this decision was because of the remarkable, energetic and creative efforts of the other finalists’:
•    Dhaval Udani of GiveIndia
•    Itır Erhart and I Renay Onur of Adım Adım (Step by Step), Turkey
•    Larisa Avrorina of CAF Russia
•    Lucia Dellagnello of ICom (Instituto Comunitario Grande Florianopolis), Brazil
•    Natalya Kaminarskaya of Russian Donors Forum
•    Rūta Dimanta of Foundation ‘Ziedot’ (‘Donate’), Latvia

The awards ceremony ended with He Daofeng’s announcement that he would be donating the prize of £5,000 to CFPA’s Hungry Children Program.