NEF – New alliance to foster democratic citizenship among the young

The relationship between state, government and citizens has been widely debated in Europe in recent years. Exercising democratic rights and being aware of the power citizens have within a modern democratic society are skills that have to be strengthened in order to sustain the European democratic model in the 21st century.

Enabling the young generation to develop these skills as citizens of Europe and pooling best practice initiatives from the third sector in the field of democratic citizenship – these are the main aims of the newly established European Alliance for Democratic Citizenship, which has operated under the banner of NEF since the beginning of 2011. 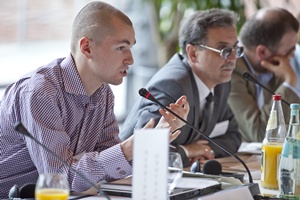 Initiated and governed by the German Körber Foundation, the activities of the alliance target young Europeans (pupils, students and young professionals) up to the age of 30. In spring 2011, the European Alliance for Democratic Citizenship started its first common operational project: FutureLab Europe, the Council of Young European Citizens. Each year, FutureLab Europe will enrol a group of young European professionals into an intense training and debating programme that will enable them to develop their own positions on European affairs, confront them with decision-making processes on the European level and empower them to debate their agenda for Europe in the 21st century with decision-makers, political leaders and the public. (Pictured is Mihails Kozlovs from Latvia speaking at a conference in June 2010 on the topic of ‘How much does the 20th century shape identities of the 21st century?’)

The European Policy Centre, a major think-tank working in policy-making in Brussels, has been the operational partner for the programme.

With new participants coming in every year, FutureLab Europe will develop as a growing community of active citizens who want to make a contribution to the future development of Europe.