Television is a universally accessible and powerful medium that should be used by civil society to educate, enlighten, engage and inform the public. Aiming to foster reconciliation in south-eastern Europe (SEE) by offering the wider audience a frank exchange of ideas in an open debate about issues that affect the region, the European Fund for the Balkans (EFB) and the Center for Democracy and Reconciliation in SEE (CDRSEE) joined forces in creating the first SEE current affairs regional TV talk show, Vicinities. 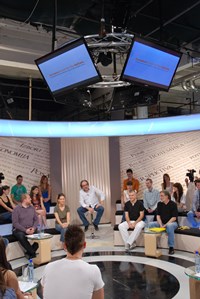 From April 2012, the five-part TV programme series was broadcast on a weekly basis during prime time on eight major national and local TV stations in five countries throughout the region. As the first pilot series surpassed all expectations, it evolved into a more ambitious project with a second season covering a series of new debates.

The 17 shows brought together well-respected and unbiased guests from a wide field of social sciences for discussing topics such as: Stereotypes; How to survive the economic crisis; Media – do they help or hinder mutual understanding; Great powers and the Balkans; To be young and to live in the Balkans; Vicinities through caricature; Our history vs your history; Violence of youth over youth; and Civil society.

A number of representatives of the EFB community network were included in all the discussions as an active participating audience, which additionally strengthened the initiative’s regional dimension.

Vicinities has proved itself as a successful tool for enabling sincere exchange, interaction and communication in the western Balkans, but also as a positive media example for attracting the attention of the public. Encouraged by this success, EFB and CDRSEE are now planning the next seasons of this exciting series.