The 2014 Coutts Million Dollar Donors Report illustrates that major philanthropy is thriving around the world. Tracking donations worth a total of $26.3 billion across the UK, USA, Middle East (GCC), China, Hong Kong, Singapore and Russia – up from $19 billion in 2013 – the findings suggest that major philanthropy is becoming more prevalent, more visible and more organized. 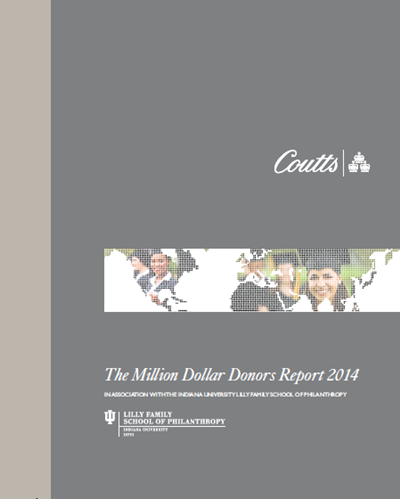 The combined value of donations of $1 million or more rose in all of the seven areas studied in this year’s report. While the nature of philanthropy is clearly very different across the regions studied and any direct comparison would be misleading, there are a number of trends worth noting. For example, echoing our findings last year, higher education topped the table of most popular causes in four of the seven regions (the UK, USA, Hong Kong and Singapore), and came second in a further two. Foundations attracted sizeable donations in many of the seven regions, with many major donors favouring them as a means of ‘banking’ mega-gifts to be distributed over longer periods of time. This suggests that more major donors are thinking long term – and support for foundations is also often accompanied by the employment of dedicated, professional staff. Major donors also tend to focus on causes close to home, except in the Middle East (GCC) where donors focus on causes overseas.

This report is about more than just data. The inspiring interviews with major philanthropists from across the regions demonstrate that philanthropy is driven by people’s values, passions, interests and visions for a better society. Increasingly, wealthy individuals and families are seeing philanthropy as a key aspect of how they think about wealth succession.

To read the report and interviews>