Breaking with the past

The latest edition of CAF’s World Giving Index reveals that the world became a less generous place in 2011. Worldwide giving appears to be mirroring global economic patterns in what the Index calls a ‘double dip’ in giving. Analysis of global giving over the past five years shows that it dropped in 2009, the year after the 2008 financial crisis, recovered in 2010, and then fell sharply again in 2011.

The Index assesses generosity across three areas: giving money, volunteering and helping a stranger. Under all these heads, the 2011 figures were down on those for 2007. Across the 146 countries surveyed, 28 per cent said they had donated money in the previous month. Australia was ranked the most generous country with Ireland second. Greece and Montenegro came last. Biggest ‘climbers’ from the 2010 Index were Indonesia, from 37th to 7th, and Paraguay from 30th to 9th. Globally, more women donated money than men in 2011, but men were more likely to volunteer time and help a stranger. 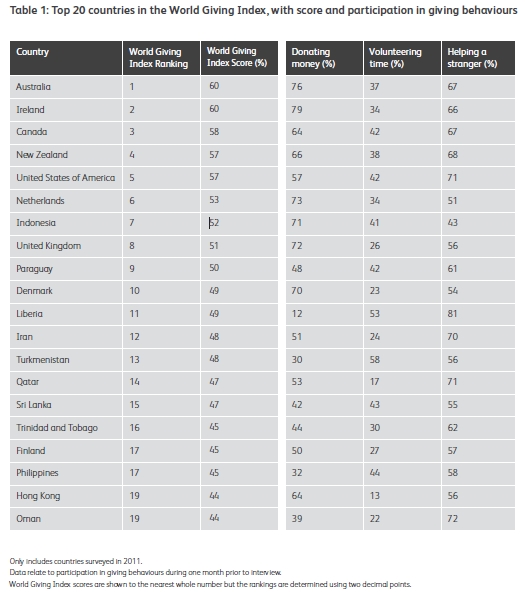 Another CAF report, India Giving: Insights into the nature of giving across India, finds that while 84 per cent of the nearly 9,000 Indians interviewed had given money to a good cause at least once in the previous year, only 27 per cent had given to a charitable organization. Giving directly to individuals, and giving in the course of following one’s faith, were much more common. Indeed, 70 per cent of donors said they prefer ‘to donate directly to the beneficiary’.