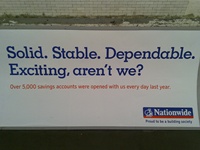 After the past turbulent year in the financial markets, the caveat seems much more noticeable and relevant. After all, in a bull market, it seemed as though the only direction investments could go was up. But now, through bitter experience, we all know better.

It is axiomatic that taking a risk is part of making an investment. While investors can mitigate some of that risk through the choice of investments, such as putting money in bonds or other guaranteed products, and the use of techniques such as diversification, there is always the possibility that money will be lost. However, the greater the risk in investments, the greater the potential reward.

For impact investments, those with a positive social or environmental benefit as well as a financial return, the element of risk is slightly different. While it is still true that greater risk will bring greater reward, in this case the reward is not only monetary. Instead, investors will also be helping to make a difference.

Investors who are worried about preserving their capital may be more reluctant to commit to impact investments, because of the high element of risk. However, they are missing the opportunity to have a real impact with their money. Other investors may not worry as much about the risk element of impact investments if they consider their investment a form of venture philanthropy.

Despite the fact that nearly all impact investments could be considered high risk, financial advisers should be assessing their client’s appetite for this type of risk. While it is true that impact investments give investors a chance to make a difference, it would be foolish for investors not to evaluate the investment’s structure and worthiness, just as they do with traditional investments. Likewise, they cannot look at the impact of the investment alone. Investors, and their financial advisers, need to look at both risk and impact.

The fact is that there is an entire spectrum of risk factors in impact investments. The most obvious would be the geo-political risk of investments in parts of the world where political stability is not a given. For example, the new $25 million XSML Central Africa SME fund will invest in the Democratic Republic of Congo and the Central African Republic. While the potential for making a difference with the Central Africa SME Fund is great, the potential for political unrest hindering work there is equally great. Despite the fact that peace accords in the Second Congo War were signed six years ago, fighting continues. The political situation in the Central African Republic, one of the poorest countries in the world, isn’t much better.

Risk is an inherent part of investing, but in impact investments, risk takes on a whole different meaning. As the 17th century French dramatist Pierre Corneille said, ‘To win without risk is to triumph without glory.’ This is all the more true in impact investments, where the investor has the chance to make a real difference if they are willing to take the risk.

Investors’ perspectives is produced in collaboration with Investing for Good, a social finance intermediary and asset manager founded in 2004.
http://www.investingforgood.co.uk

Maureen Stapleton is an analyst at Investing for Good in London. Email mstapleton@investingforgood.co.uk