Are giving games a better way to teach philanthropy?

Alliance’s recent feature on philanthropy scholarship showcased the growing number of educational opportunities tailored for current and prospective social sector professionals. As Gregory Witkowski described the phenomenon: ‘The development of philanthropy and nonprofit studies programmes over the last two decades is astounding.’ But student philanthropy programmes intended for a broader audience have languished by comparison.

‘Experiential philanthropy’ – in which students are given real money to donate to charities – is the standard approach to teaching philanthropy to undergraduates. In the feature, Charles Keidan reflected on co-teaching one such class to Stanford students who had the opportunity to donate $100,000. Millions of dollars a year are spent on this model, but it hasn’t grown in nearly a decade and has yet to extend beyond North America. Is it time to re-think student philanthropy programmes?

Below, I argue that less intensive and expensive formats like ‘Giving Games’ – low cost simulations of real giving choices – have greater potential for scale, and use scarce resources in a more efficient manner. I’ll argue that the lack of growth in traditional experiential philanthropy is connected to its high cost structure and show how results from the field suggest a different and smaller scale approach to student philanthropy is the way forward.

Student philanthropy, but at what cost? 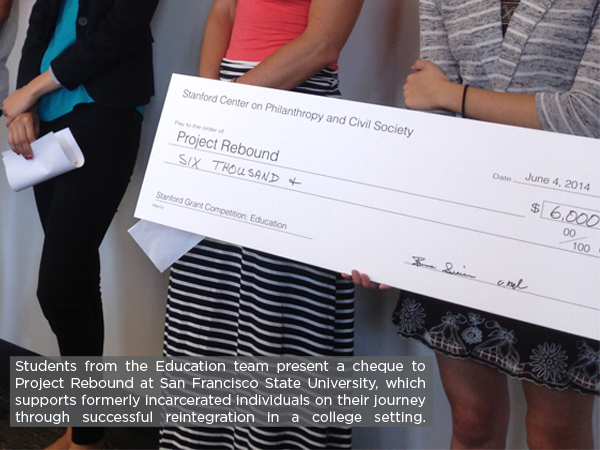 Keidan’s account of the Stanford class exemplifies the ‘traditional’ model of student philanthropy: semester-long courses, typically for undergraduates, in which students can donate anywhere from a few thousand dollars to as much as $100,000. While the Stanford programme is funded by Texas-based philanthropist Geoffrey Raynor’s Philanthropy Lab, the model originated at Northern Kentucky University in 1999. Though student philanthropy seems to have thrived there,[1] efforts to spread the model more broadly have struggled to sustain initial success. 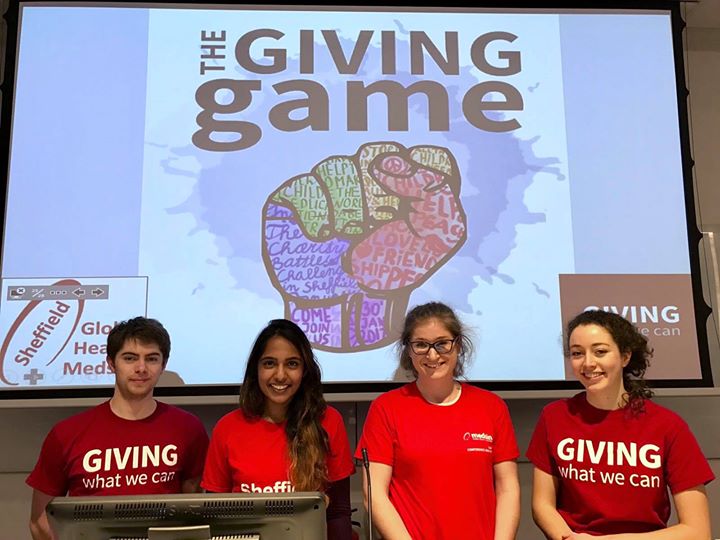 The experience of four US based initiatives aiming to implement this model at multiple campuses is summarised in the chart below. Taken at face value, the data suggest that use of the traditional model declined after peaking in the 2009-10 academic year. More realistically, usage has likely been roughly flat since then, as data from the Pay it Forward program omits some classes that found alternate funders. The only way student philanthropy has grown meaningfully is geographically across the US and Canada, as funding responsibility shifted away from Pay it Forward (which was concentrated in three states).[2] 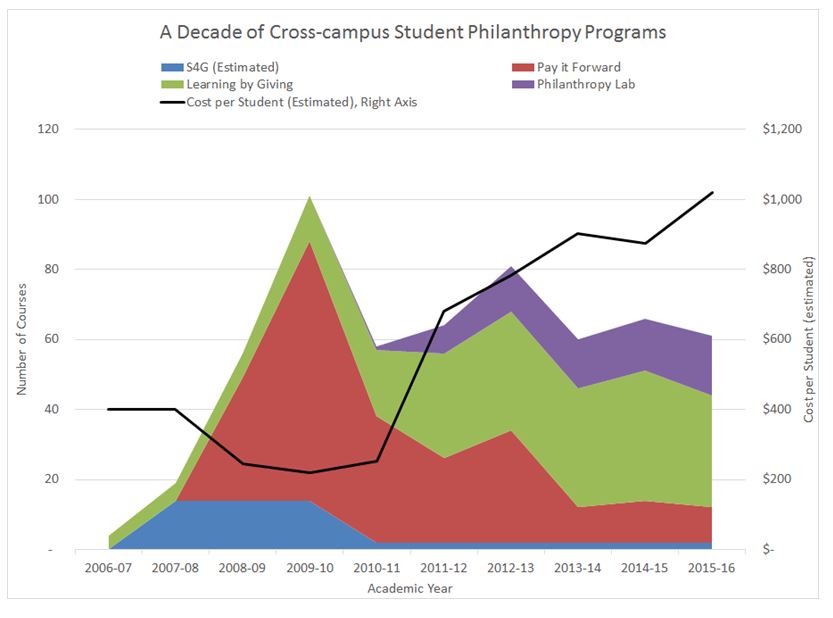 Traditional experiential philanthropy has had deep-pocketed supporters and advocates including major donors such as the Buffett family (Doris Buffett, Warren’s older sister, founded the Learning by Giving Foundation) as well as corporate and federal funders. These groups have provided university students with over $8 million to give over the last decade. But, with a few exceptions, they have been unable to hand funding responsibility off to more sustainable (presumably local) sources, thus inhibiting the ability of  original funders to expand to new schools.

Two programs initiated by the Ohio chapter of Campus Compact: Students4Giving (funded for 3 years by the Fidelity Charitable Gift Fund) and Pay it Forward (funded for 2.5 years by the Corporation for National and Community Service) illustrate the lack of growth. Each program set expectations that universities  would seek alternative funding but shrank significantly when their original funding ended.

Pay it Forward shrank despite reducing its  grant for each class from $4,000 to $2,000. As Learning by Giving ($10,000 per class) and the Philanthropy Lab (which currently provides up to $50,000 per class) have grown, costs per student have increased dramatically. This high cost structure makes it harder for secondary funders to emerge, and has been cited as a reason why student philanthropy has not been adopted in Europe. 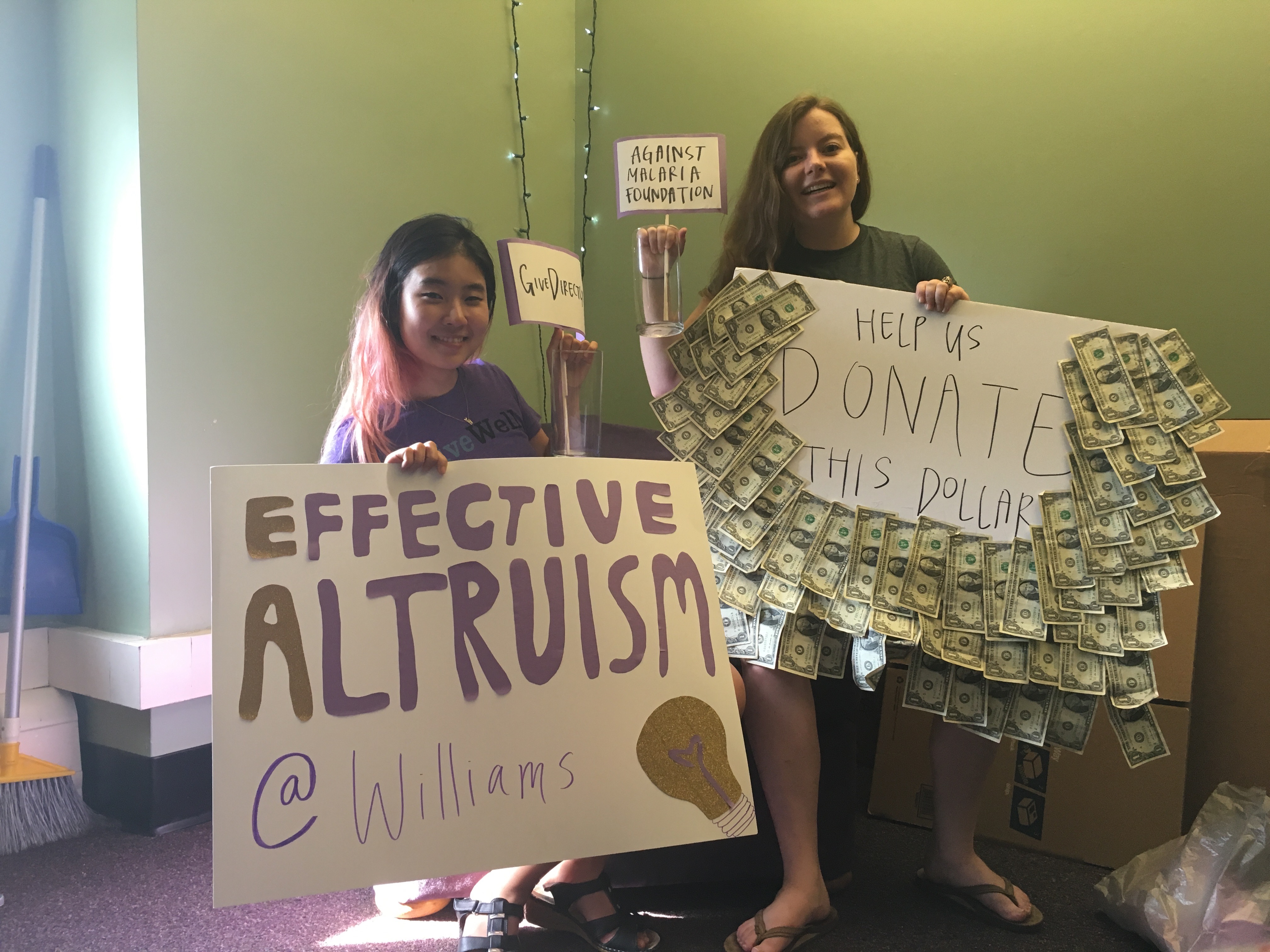 Turning universities into a pipeline producing skilled amateur donors could change giving at a cultural level. But doing so will require that millions, not thousands, of students be taught about philanthropy each year and that resources be spent as efficiently as possible.

The two most important resources are money (for students to give) and time (which carries an opportunity cost for both teachers and students). Critically, both these resources yield diminishing marginal returns. While incremental quantities of money and time presumably produce positive marginal benefits, each subsequent increment likely produces less benefit than previous ones.

A simple thought experiment shows this dynamic with respect to money. If a class had $20,000 to donate instead of $10,000, would students learn twice as much? Of course not: students would still be reading the same materials, hearing the same lectures, and having very similar discussions.

An experiment I conducted with researchers at George Mason University suggests it doesn’t take much money to produce significant changes in giving behavior. Our study found that subjects randomly assigned to receive $10 to donate to their choice of two charities donated almost four times more of their own money and were twice as likely to subscribe to a mailing list relative to a control group that wasn’t provided with money to donate. 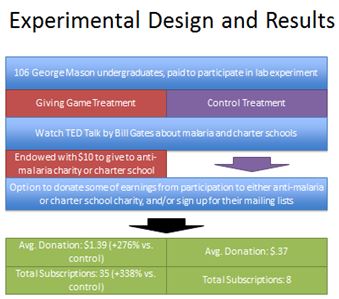 This study suggests small scale experiential philanthropy can have big effects. It also supports the idea that experiential philanthropy funding yields diminishing marginal returns: the large effects of small monetary endowments make it hard to believe that additional incremental giving could have effects of similar magnitude.[3] This implies that the traditional practice of providing students with large sums of money is unnecessary.

Like money, time also yields diminishing returns. If a school ran a traditional class over two semesters rather than the normal one, we wouldn’t expect students to learn twice as much. The single semester format still allows students to learn by giving and presumably prioritises the most important content.

Consistent with this notion, students’ demand for philanthropy education seems inversely proportional to the amount of time required. Giving 2.0, a Massive Open Online Course (MOOC) produced by the Laura Arrillaga-Andreessen Foundation (in which students donated money provided by Learning by Giving), provides a clear example. Like most MOOCs, Giving 2.0 experienced significant attrition. Its Impact Report found: ‘The first video of the course received eight times the number of views as the last video. The decrease was exponential and consistent across the entire course.’

Giving Games: more impact for less?
Giving Games are a form of experiential philanthropy that put this theory into practice. They take the form of workshops usually lasting 1-2 hours. Participants hear an introduction about good giving, learn about a few pre-selected charities, discuss their relative merits, and are provided with funds (usually $10-20 per person) to make a real donation to their favorite. This model encourages people to think about their giving priorities, teaches them about resources available to donors, and applies insights from the growing literature on donor behavior to ‘nudge’ them toward better giving.

I founded the Giving Game Project (originally called A Path That’s Clear) and funded the original workshops, the first of which was held in April 2012. In September 2013 the project moved its home to The Life You Can Save, a nonprofit that promotes high-impact giving connected to the effective altruism movement. Since then, we have recruited, trained, and provided experiential philanthropy funding for a world-wide network of Giving Game facilitators.

Many are educators, usually at the university level. Some have had experience teaching traditional philanthropy classes, and these educators have been powerful advocates who have helped the Giving Game model spread through word of mouth. Like the traditional model, Giving Games have been used in a variety of disciplines (most commonly philosophy). But Giving Games have the advantage of being able to reach people who don’t self-select into student philanthropy, since students don’t enroll in these classes because of the opportunity to give.

The Giving Game model has now been used at roughly 80 universities, in 20 countries, and on four continents. Last academic year roughly 3,000 people took part in a workshop, collectively donating a little over $45,000 (less than what some traditional classes give). Growth has been strong, and is only constrained by limited capacity (funding is scarce and I run the project largely on my own, as half of my job responsibilities) rather than a lack of demand. 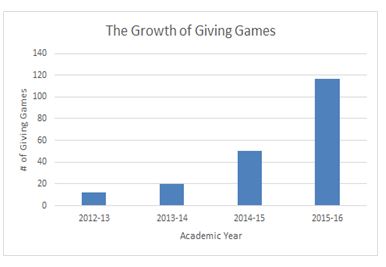 Conclusion
Student philanthropy has traditionally been ‘a pedagogic strategy for both civic engagement and nonproﬁt management education.’[4] The first of these goals is relevant to a vastly larger population than the second, and our pedagogic strategies need to reflect this difference.

Short-form models like Giving Games are well suited to broad audiences. At the other end of the spectrum costlier traditional experiential classes teach skills such as site visits that are most valuable and relevant to grantmaking professionals. Intermediate models (e.g. day-long experiential philanthropy seminars) can be used to meet intermediate goals (e.g. promoting social sector career options). And surely Giving 2.0, which can distribute excellent modularized content worldwide at no marginal cost, also has an important role to play. Student philanthropy is too complex, and too important, to be conducted a single way.

Jon Behar is Chief Operating Officer and Director of Philanthropy Education at The Life You Can Save.
Email: jon.behar@thelifeyoucansave.org