It may be a cliché to describe a book as ‘timely’, but in this case the description is fully justified. In a moment when civil society, and hence philanthropy, seems beset with attempts to limit its scope, both here and around the world, Rhodri Davies has written a splendid account of the wellsprings of philanthropy, both historical and moral. He explicitly makes the case for a philanthropy that is true to its roots. This means understanding that addressing injustice and inequality through private wealth is an inherently political act and inescapably involves campaigning.

Davies sets out his case in a scholarly fashion but with a lot of good fun on the way. He begins by arguing that the Reformation became the defining moment for philanthropy when the pivot to Protestantism in the sixteenth century changed the motivation of philanthropy from an act of piety to meeting social needs. This entailed the collapse of Catholic infrastructure for charity and the inauguration of the Poor Laws and the 1601 Statute of Charitable Uses, still central to our system. 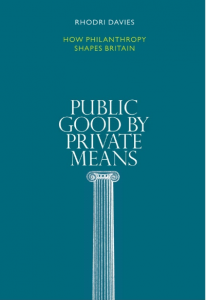 The three central pillars of the book are philanthropy’s relationship with welfare, with government and with society.

The state’s role in the amelioration of poverty has ebbed and flowed and has been intertwined with different conceptions of why someone might be poor either ‘by desert’ or circumstance. The Victorian era might be seen as the highwater mark of philanthropic intervention. This was reversed after the Second World War amid concern that ‘charity’ was demeaning and the state would be better at providing universal goods. There has never been a natural dividing line and these borders are again being questioned today.

In a chapter on philanthropy’s relations with government, Davies shows how this developed somewhat idiosyncratically. Current certainties, for instance on tax relief, emerged in a haphazard way. Davies is particularly emphatic that philanthropy has always campaigned for social change. Thank goodness it does and many of today’s hallmarks of a civilized society were fought against tooth and nail by government or business. Hands up anyone who thinks it’s a good idea to send children up chimneys? Davies also points out that the distinction between political and party political ought to be one that any politician or regulator would do well to recognize.

Lastly, he argues that philanthropy should never be defined simply by its relationship to the state. In one chapter he mainly looks at the motivations of philanthropists. Perhaps uncomfortably, it has often related to social status, or been used as a tool to maintain the status quo and keep the poor from rising up against the rich.

The cast of characters is a rich one. Charles Dickens enters the stage as the doyen of philanthropic advisers. Frederick Charrington becomes the champion of temperance based on his profits from brewing (alcohol gets its own case study). Prison reformer John Howard was unlucky when it came to pirates, while financier Baron Hirsch was lucky with the nags and gave £20 million in winnings. And, fittingly, George Cadbury is seen as the absolute philanthropist, weaving every part of his life to a philanthropic purpose – including all aspects of his business – and being politically active on the great issues of the day.

The Baring Foundation is hoping to support an Independent Inquiry into the Future of Civil Society – this masterly summary of the past will be essential reading.

David Cutler is director of The Baring Foundation. Email david.cutler@uk.ing.com

About the book
Published by
Alliance Publishing Trust
Price
£18
ISBN
9781907376245
To order
http://www.alliancemagazine.org 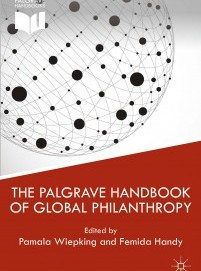