White Philanthropy: Carnegie Corporation’s ‘An American Dilemma’ and the making of a white world order

Three ways to be a (more) feminist philanthropist: Recommendations from women’s rights organisations

Lessons from a fundraising journey

Operating Archetypes: a new tool for analysis and action 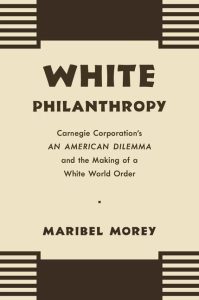 Following the murder of George Floyd in 2020 many organisations and institutions, including foundations and charities, declared their support for the aims of the Black Lives Matter movement and pledged to do more to further racial equality and justice. How long momentum will be maintained beyond that initial flurry of rhetoric remains to be seen. Yet the debate does seem to have moved on: racial justice is arguably no longer a ‘cause area’ (and therefore only relevant to a select group of organisations that choose to focus on it), but rather a cross-cutting concern that all philanthropic organisations need to take into account across the full range of their activities.

Against this backdrop, this book by Maribel Morey feels incredibly timely. It brings to light a previously hidden story about philanthropy in the early 20th century, and in doing so offers a compelling example of the power of historical perspective to inform our current thinking.

The book centres on the Carnegie Corporation’s role in commissioning the Swedish economist Gunnar Myrdal to research and write An American Dilemma; a report which went on to have an enormous influence on the development of race policy in the US following its publication in 1944 (including being cited as a key source in the landmark 1954 Brown v Board of Education Supreme Court decision). The core argument of White Philanthropy is that we should challenge the standard historical narrative, in which Carnegie Corporation’s support for An American Dilemma is held up as a shining example of progressive philanthropy and the role foundations can play in addressing issues of racial inequality and injustice. Instead, Morey argues, we should see it as part of a desire to maintain the status quo by ‘solving’ the problem of race in a way that maintained white Anglo-Saxon dominance around the world.