At the end of a long and tumultuous year, Alliance hosted an event at the Aga Khan Centre in London. Looking at the key trends and topics of 2022, we began with a livestreamed panel followed by an in-person workshop, all kindly sponsored by Mercer. 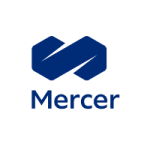 Hundreds watched online alongside the room’s attendees in London to listen to Fozia Irfan, Director of Children and Young People at Children in Need; Rhodri Davies, Founder and Director of Why Philanthropy Matters; Liubov Rainchuk, Deputy Director at Zagoriy Foundation and Jo Swinson, Director at Partners for a New Economy. Moderated by Alliance’s Executive Editor Charles Keidan, the panellists were gathered to discuss:

The workshop looked at this year in philanthropy through the prism of Alliance’s four special features: mental health philanthropy, learning from failure, decolonising philanthropy and crisis, reaction and resilience.

In February, Ukraine was at the brink of war with Russia and Zagoriy Foundation had to shift to a wartime footing. ‘The funny thing is, right before the war [the foundation] had finally agreed its annual budget and programs,’ said Rainchuk. ‘When it broke out, we had to restart the whole process from the beginning.’ The Zagoriy family decided to shift to support both the army and Ukraine’s defence system. ‘War in this country is something you cannot fully understand if you don’t have the experience. For Ukrainians, supporting the army means supporting Ukraine, independence and resilience. When someone saves our borders, they save us.’ 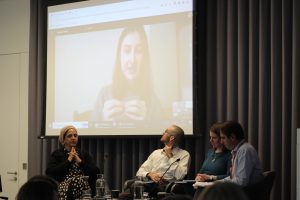 On the screen, Liubov Rainchuk, Deputy Director at Zagoriy Foundation, speaks about philanthropy in the time of war.

Rainchuk felt that they had support from the international community. ‘Luckily, we worked a lot to provide open communications – our website is in English, we had communications with organisations abroad, so we were lucky enough to receive support from our partners – both new and pre-war ones.’ Philea also set up a platform to support donations to Ukraine from across Europe.

From the beginning, the Zagoriy Foundation started working to support grassroots organisations throughout Ukraine. ‘We organised three grant calls and supported thirty organisations through that, providing them with organisational support, capacity building, educational programs to provide them with money and skills, resilience, stability and mentoring to work in wartime conditions. One of our main activities pre-war was researching the culture of philanthropy in Ukraine, so we did another research during this summer – how Ukrainians responded to war, and what the new trends in giving are.’

Philanthropy is in an ideal position to be supporting and funding some of the people who are thinking about this long-term future – what are the challenges going to be? How is the world moving? How does a society need to react?

Davies then spoke about international philanthropy’s response to the invasion, which was initially cautious ‘because of the inherently political elements’. However, crowdfunding is shifting giving ‘because… people can directly appeal to individuals in other countries through crowdfunding platforms, and payments can be made via apps and cryptocurrency, people are able to make that appeal and say ‘what we need on the ground is money to buy weapons’ and people in other countries are happy to give money for that, that can take place.

‘I think it’s really interesting whether it challenges the boundaries of what we understand of philanthropy.’ 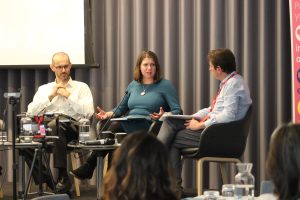 Jo Swinson [centre], Director at Partners for a New Economy, speaks about the economic problems that the war in Ukraine has triggered.

Swinson then spoke on the economic problems triggered outside of Ukraine, particularly with food and energy disruption. ‘When you think about the Ukraine crisis, it’s really on two levels – [firstly] you hear Liubov talking about life and death… There’s an intensity and urgency in that country where there will always be a response from philanthropy and from individuals who hope to ameliorate the worst impacts while hoping the war ends soon. The second level… is that knock-on effect, it’s really deepened and highlighted many of the vulnerabilities of our current economy, particularly around energy security. Europe’s reliance on Russian fossil fuels is significant and arguably has been a vulnerability for a very long time.

‘Philanthropy is in an ideal position to be supporting and funding some of the people who are thinking about this long-term future – what are the challenges going to be? How is the world moving? How does a society need to react? Governments and academia can do some of that, but philanthropy is really well-placed and doesn’t have the same strings attached.’

Irfan then referenced community foundations and the role of community philanthropy at times such as these, with reference to Northern Ireland. ‘When there are tensions and divisions in society, when there’s civil unrest which hasn’t turned into conflict, that’s where philanthropy should play a stronger role rather than waiting for the escalation. Philanthropy has sometimes been cautious about entering that space because conflicts by their nature aren’t simplistic… As a philanthropist, how can you maintain that neutral objectivity that is so fundamental to building credibility?

‘Atlantic Philanthropies and The Community Foundation Northern Ireland were fundamental to peacebuilding. We would not be where we were without those institutions. That’s not just in terms of money and grantmaking, but also soft power – influencing, bringing political parties together, all of those things. I would like philanthropy to think of itself in a much more expansive way. Philanthropy is power, it’s just about where and how to use it in a way which is not anti-democratic.’

Next, to the rise of intermediaries. Speaking to the increase in the desire to pool resources, Swinson said ‘If you’re doing something you haven’t done before, you want to learn and have different perspectives on the table. It really enriches the discussions that you have. There’s also a perceived lower risk if it’s not all being done by one foundation. I wonder if there’s something about the increasing uncertainty of the world we’re living in?’

‘We are certainly seeing it as a trend,’ said Davies. ‘What’s fascinating is that the shift towards pooled funds seems both an acknowledgement of the power philanthropy has, but also of the limitations of that power… None of these problems are going to be solved by any one person or institution, or even one sector. It’s absolutely necessary that we do find ways to collaborate.’

‘With pooled funds, the fact that they are pooled does not make it in and of itself democratic, it just means that you’ve put the money together with other foundations,’ said Irfan. ‘I think it’s also a reaction and response to the journey towards recognising that we need to be funding movements, not institutions. No one institution or charity can solve the problem of poverty, racism or patriarchy… Where philanthropy gets exciting, is when we start to work in collaboration to fund movements, and recognise that we aren’t the problem solvers but we can provide the power to enable that to happen.’

Zagoriy Foundation also had to pivot to become an important intermediary in a conflict zone. ‘Collaborations, community and listening to those on the ground is something we believe in and really try to do. For example, none of our calls were for humanitarian aid even though we had our thoughts, but we were trying to give our potential grantees the opportunity to give us information about what is needed on the ground.’

I think there’s a deeper question about how we make grants, and whether philanthropy is an art or a science.

The panel then spoke about globalisation, and the growth in the development of philanthropy infrastructure. Rainchuk spoke on feeling organically part of a global community: ‘We started to work on [this] long before the war. We knew the landscape and some of the players, attended conferences and so when everything happened we had things we were able to share with an international audience. We had the stage to share our voice and to share what is happening and what the obstacles were that we were facing.’ However, this hasn’t been so easy for Zagoriy’s partners – whether they communicate in limited English, or are more operations-focused instead of communications, it has been a struggle. ‘We don’t have an umbrella organisation for philanthropy foundations which unites institutions in Ukraine.’ 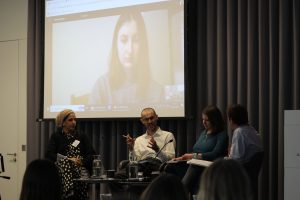 The panel discusses what’s happened in 2022 in philanthropy.

The global conversation is less clear. ‘There is a bit of a divide between the people who work in philanthropy and manage the money, and some people who own the money,’ said Davies. However, Davies also commented that it appears there is a new ‘breed’ of philanthropist who acknowledges the challenges of power, inequality and democracy as a starting point in their giving journey.

The biggest motivator in shifting power is scrutiny, said Irfan. ‘It would be great if we had our own self-imposed standards of excellence, but I don’t think we’re at that stage.’

Effective altruism was the next topic, particularly in light of Sam Bankman-Fried’s downfall. ‘A lot of people feel that effective altruism is culpable because it provided the intellectual moral framework that allowed him to do what he did with his company,’ said Davies.

‘I think there’s a deeper question about how we make grants, and whether philanthropy is an art or a science,’ said Irfan. ‘Not only do I believe that it’s more effective when you hand over power to the communities you are working with to make decisions about that funding, but also… a lot of our funding is about poverty and inequality. A lot of the sources of our funding are directly linked to poverty and inequality.

‘If you look through a prism of justice, you’ll recognise that communities are best placed to make decisions about where assets are leveraged and distributed. There’s a fundamental disconnect between you as a philanthropist or as a philanthropic organisation, believing that you have the knowledge and expertise to make decisions about people who lead very different lives to you and who face very different challenges to you.’

Each discussion was led by a group expert at the table: Anna Kydd, Director of The SHM Foundation led her group on mental health philanthropy; Charles Keidan led the group on learning from failure; Dr Shonali Banerjee, Senior Research Associate at the Cambridge Judge Business School led her group on decolonising philanthropy; and finally Nick McGrath, Deputy Director, Europe and Asia at Aga Khan Foundation led his group on crisis, reaction and resilience.

Each table was asked to present key standout points on each topic.

The remarks from the mental health philanthropy workshop:

The remarks from the learning from failure workshop:

The decolonising philanthropy group spoke about:

Alliance will have a range of digital and hybrid events throughout 2023. Make sure you are subscribed to our newsletter so that you don’t miss any of them!

Amy McGoldrick is the Marketing, Advertising and Events Manager at Alliance.

Thank you. A very interesting afternoon!

Asia Philanthropy Congress: a space to explore the future of the region’s giving amid rapid growth