In December 2014, for the second consecutive year, Colombia had the unenviable distinction of being a country with one of the highest number of displaced people in the world: 6.5 million out of a total population of nearly 49 million. Following the announcement that a peace deal will be signed between the government and the FARC[1] insurgency movement, after more than three years of talks, there is hope that Colombia can now begin to reduce that figure significantly. But the challenge of addressing the needs of the displaced and restoring land to whole communities will be a formidable one beyond the capabilities of government alone. Corporate foundations, the heart of the country’s institutional philanthropy, are braced to play their part.

The main causes of internal forced displacement in Colombia are the long-running armed conflict between the state and FARC, drug trafficking and urban violence. The government’s victims’ register shows that the FARC are responsible for the lion’s share (41 per cent) of cases of displacement. Unlike in other countries, forced displacement in Colombia is, according to research by Ana Maria Ceballos from the EAFIT University, an ‘extensive phenomenon, diluted over time; it is recurring and continuous, involving an exodus of both individuals and groups of people that is silent and invisible’.

‘A quarter of those displaced are totally illiterate and that 5 per cent have some kind of physical or mental disability as a result of the armed conflict.’

Though it has been going on since the 1990s, Colombians became more aware of the issue following a Constitutional Court ruling in 2004 and the subsequent creation of a Policy of Truth, Justice and Reparation to investigate expropriations. However, few prosecutions have resulted. Falsified title deeds to plots of land from which displaced people were forced make it difficult to verify claims. Add to this that a 2011 study by the Ideas for Peace Foundation and Los Andes University estimates that a quarter of those displaced are totally illiterate and that 5 per cent have some kind of physical or mental disability as a result of the armed conflict. 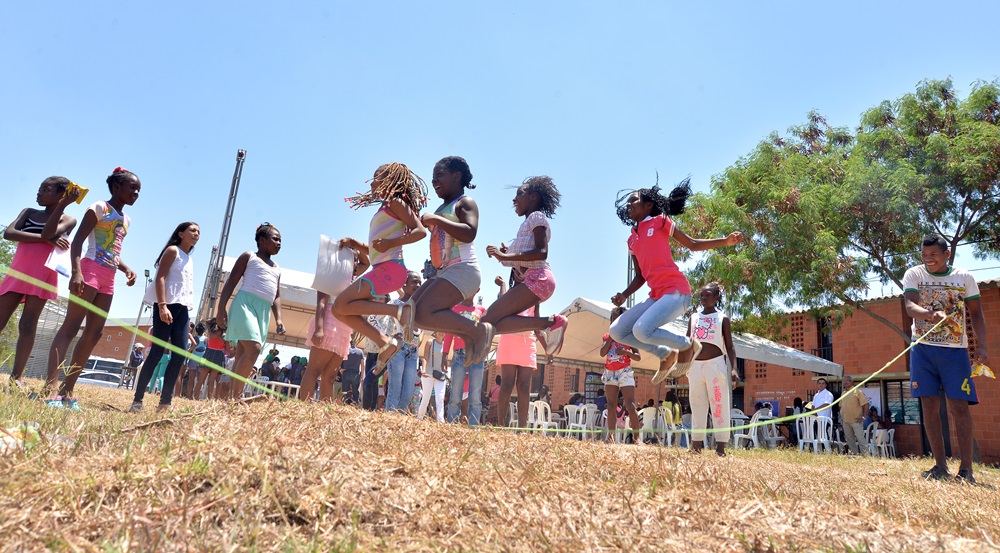 Children from the neighbourhood of Cali, Potrero Grande, where much of the population is made up of people displaced by the violence. Credit: Harold Díaz, Fanalca Foundation.

Corporate foundations: so far and in future
In Colombia corporate foundations represent a large part of institutional philanthropy. In September 2015, the Association of Corporate Foundations (Asociación de Fundaciones Empresariales or AFE) published a study highlighting successful projects promoted by corporate foundations that are geared towards peacebuilding. These are in areas as various as education, economic development, creating opportunities and income generation, building decent housing, strengthening institutions, and art and culture. All these projects are marked by an active community participation in their design and implementation in the spirit of encouraging people to have more deeply felt roots in their lands.

‘The challenge for AFE and its members is to maintain, expand and deepen such initiatives towards effective peacebuilding.’

The challenge for AFE and its members is to maintain, expand and deepen such initiatives towards effective peacebuilding. Colombia, more than ever, needs all sectors of society to work together to strengthen its institutions, especially in those areas of the country where the presence of the state is weak. Corporate foundations have management capacity, knowledge, a long-term vision, resources; their ability to work in partnership with the state has been shown by successful public-private partnerships in other spheres. They will need to draw on all of these. Moreover, any future initiatives will need to be based on the involvement of communities and they will need to be fully evaluated so that changes can be made and lessons learned and shared.