In unpredictable and volatile environments, such as post-civil war Guatemala, grantmakers may be able to play a critical role on key human rights concerns. But they have to be prepared to take strategic risks in two key ways: by shifting support to emerging actors and strategies when traditional approaches stagnate, and by investing in those organizations most closely tied to communities at risk.

The Fund for Global Human Rights began its programme in Guatemala in 2003, in the aftermath of three decades of civil war. One of the major legacies of the war was inequitable land distribution, with approximately 2 per cent of the population owning 70 per cent of all productive farmland. Government security forces, acting in the interests of powerful landowners, had carried out violent evictions of peasant farmers.  Conflict over disputed land ownership threatened to undermine the fragile gains secured by the 1996 Peace Accords.

To address this part of our grants programme, we prioritized funding groups based in Guatemala City that were calling for national legislative and policy reform. Two years later, however, we were stuck, our land rights grants going to organizations that were not making a perceptible difference. Divisions within the land rights movement – and specifically distrust between the national organizations with no constituency and the community-based organizations fighting for their own livelihoods, health and security – had weakened civil society’s response to the land crisis. While land rights were a priority for human rights activists in Guatemala, there was little effective work for a donor to support. 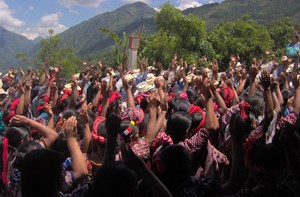 We therefore started looking at a different set of actors in the land rights movement, smaller, community-rooted groups focused on the impact of mining on land rights. By 2006, the Guatemalan government had granted foreign companies upwards of 300 natural resource concessions, almost all of which were located on or next to land inhabited by indigenous communities. The concessions were granted without any consultation with affected communities and the mining that followed had devastating health and environmental consequences. Grassroots opposition to mining spread, provoking a violent response from private security forces brought in to protect the mines.

So we decided to shift our land rights funding and invest in a number of smaller community organizations – most newly formed and largely untested – that were focused increasingly on the impact of mining on land rights. We made grants to help them to play a bigger role in setting the goals and strategies for land rights activism. We focused on groups pursuing a strategy of working with local authorities to hold consultations wherein local communities could discuss and vote on the prospect of a mine locating on or near their land. We also supported national organizations ready to connect these groups to one another and a technical assistance provider that could take lessons learned from early advocacy efforts and help communities to build effective campaigns to defend their rights.

Despite two major setbacks – the Guatemalan Supreme Court ruled that community consultations rejecting mining were not legally binding, and efforts to displace a well-established mine foundered – grassroots activists started scoring real victories with this new strategy. In the region of Huehuetenango, all affected communities that held consultations rejected mining. Even though these votes may not be enforceable in Guatemalan courts, community resistance has so far deterred mining companies from entering these areas. The campaign to counter destructive mining and related abuses quickly spread to other parts of the country. Fund grantees have exported this model to other communities that have successfully held the line against harmful mining. (Pictured: a community consultation vote on mining in Huehuetenango.)

Moreover, as a regional funder, we knew that these struggles were not unique to Guatemala. We provided funding for community-based and national land rights activists in eight Meso-American countries to join forces to counter the effects of mining. This campaign has brought together once isolated activists, turned unprecedented attention towards a regional human rights priority, added force to litigation against mining companies in Canadian courts, and reinvigorated the land rights movement in Guatemala.

Perhaps the most important lesson to be learned from this human rights funding experiment is that the key to success lies in giving locally rooted organizations the resources to shape and lead on the issues that affect them most. Without their active engagement and leadership, any human rights funding strategy would have lost its way.

Regan Ralph is president of the Fund for Global Human Rights. rralph@globalhumanrights.org