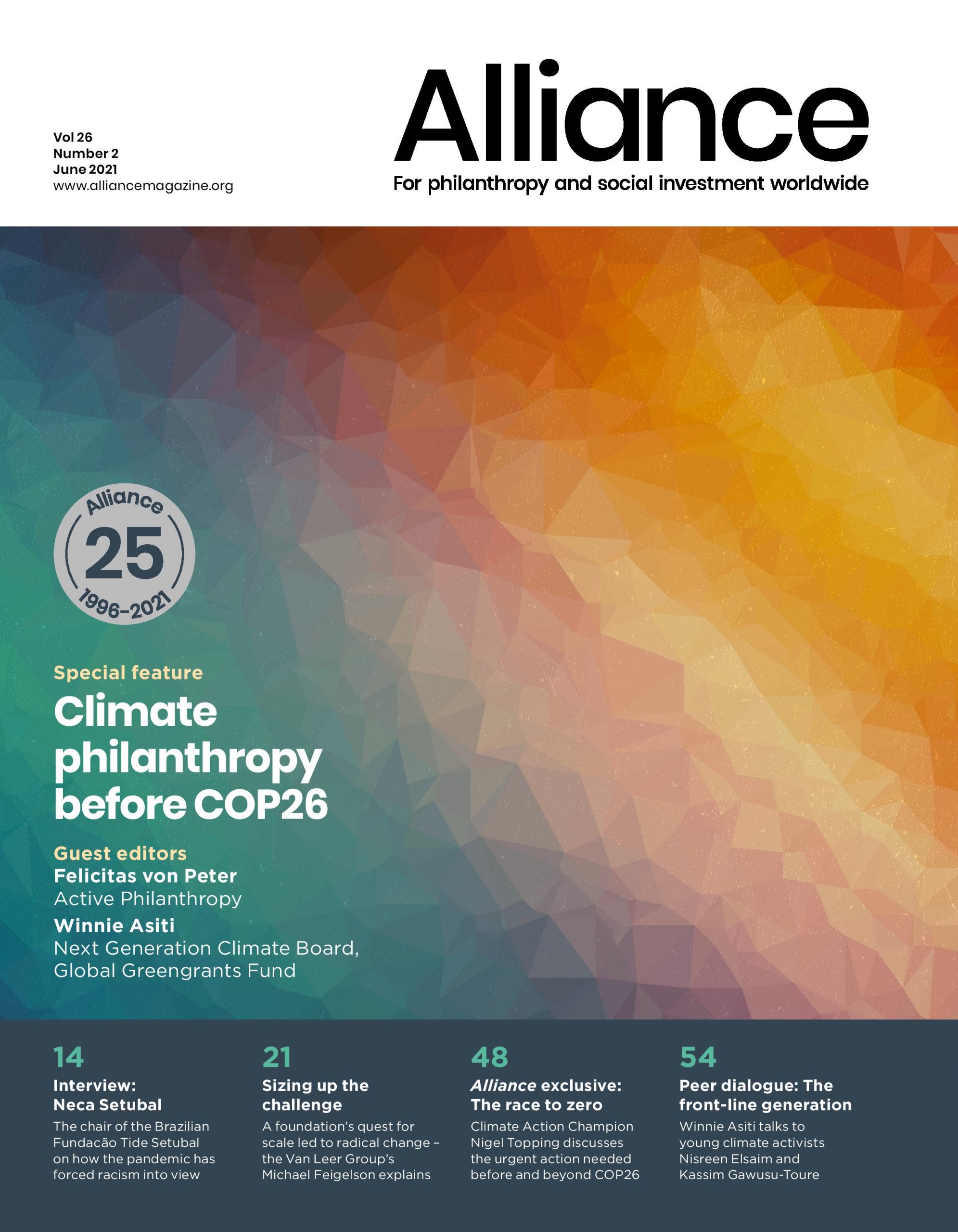 Audacious philanthropy for our time

A number of platforms, networks and pooled funds have emerged in recent years to enable funders to combine their efforts in the battle against climate change. A selection are profiled below

ClimateWorks Foundation
The ClimateWorks Foundation is a California based organisation with an annual budget of approximately $100 million. The foundation, registered as a 501c3 charity rather than a private foundation, brings together funders and researchers to amplify the contribution of philanthropy to combatting the climate crisis. Since its establishment in 2008, it has provided over $1 billion in grants to over 500 grantees across the world. A long list of funders includes the Hewlett, Packard, Oak and Ford Foundations, Bezos Earth Fund, Norway’s International Climate and Forest Initiative and the Children’s Investment Fund Foundation. ClimateWorks also hosts The Climate and Land Use Alliance and the Kigali Colling Efficiency Program as well as running more than a dozen funder collaboratives.
climateworks.org 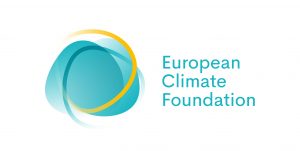 European Climate Foundation
The European Climate Foundation (ECF) was founded in 2008 as a collaborative of philanthropic funders to develop solutions and mobilise public and political engagement on climate change, aiming in particular to create a net zero greenhouse gas emissions society. It has since become a network of over 320 organisations. ECF is also part of a global network to stimulate climate-related policy work. Spending in 2019 on programmes and operations was €36.3 million, and principal areas of work include low-carbon power generation and clean transportation as well as influencing work at the highest levels of government.
europeanclimate.org

African Climate Foundation
Newly formed and the first African-led strategic grantmaker in the field of climate change, the African Climate Foundation is the latest of the regional philanthropy platforms along the lines of the ECF and ClimateWorks Foundation, with both of which it will work in partnership. It will focus on activities devised and led by Africans and will support and develop networks across the continent for the sharing of knowledge and expertise. Especially keen to explore the relationship between climate change work and development, it also notes what it calls the climate-health nexus, arguing that climate change will bring about new health challenges and that ‘lessons can be drawn from the Covid-19 experience about how to build resilience (through, for example, improved infrastructure, access etc) against future climate change related health challenges’.
africanclimatefoundation.org

India Climate Collaborative
Formed in 2020 with support from some of the country’s foremost philanthropies, the India Climate Collaborative (ICC) marks the first collective response by Indian philanthropy to the climate crisis. It consists of a core group of 20 private and corporate foundations, mainly from India but also a few international bodies, among which feature some of the foremost names in Indian philanthropy, including Ratan Tata, Anand Mahindra, Rohini Nilekani, Nadir Godrej, Aditi and Rishad Premji, Vidya Shah and Hemendra Kothari, and a wider network of affiliates drawn from donors, impact investors and governmental agencies which now spans over 100 organisations. During its first year of operation, it has launched campaigns on air quality along with Sesame Street Workshop India, the Tata Trusts and the Clean Air Fund and has co-hosted four ‘climate adjacency’ workshops.
indiaclimatecollaborative.org

Energy Foundation China
Energy Foundation China, actually registered in the US, has been working in China since 1999 on the country’s sustainable energy development with a mission to achieve greenhouse gas emissions neutrality, good air quality, energy access and green growth. Working as a regranting agency, facilitator and adviser, the foundation operates across seven fields: power, industry, transportation, cities, environmental management, low-carbon economic growth, and strategic communications. By the end of 2019 it had contributed funding worth over $330 million spread over 2,893 projects.
efchina.org

Climate Leadership Initiative
Launched in 2019 to catalyse philanthropic funding to urgently address the climate crisis, the Climate Leadership Initiative (CLI) provides philanthropists and major foundations with expert guidance on how and in what to invest. CLI works closely with its founding funders, the CIFF, Oak, Hewlett, Packard, MacArthur and Sea Change foundations, as well as climate ambassadors – seasoned climate funders committed to helping guide other philanthropists – particularly those new to the field. CLI connects philanthropists to the resources they need to get started quickly by receiving tailored guidance on high-impact solutions, and engagement with a network of peers and climate experts.
climatelead.org 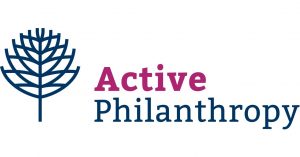 Active Philanthropy
Active Philanthropy, an advisory and knowledge hub founded in 2006, decided in 2018 to refocus its activities on climate change and its impacts. Arguing that the climate crisis intersects with all other areas of giving, the organisation calls for a rethinking of philanthropy’s role in tackling the crisis. Through awareness raising and knowledge sharing, workshops and expeditions, co-funding and peer-learning opportunities, as well as tailored grant services, Active Philanthropy helps funders from all sectors to integrate a climate perspective into existing and new portfolios. Partners include foundations, philanthropic intermediaries and scientific institutions.
activephilanthropy.org

Clean Air Fund
Not to be confused with the UK government’s £220 million of clean air funding announced in 2018, this is a philanthropic initiative established with £20 million in funding from hedge fund manager and CIFF founder Sir Christopher Hohn. It brings together funders, researchers, policymakers and campaigners to tackle what its website calls ‘the hidden emergency’, air pollution. Launched at the UN secretary-general’s Climate Summit in 2019, it has raised more than $50 million from funders focused on climate change, health, mobility and children. More specifically, it aims to support the WHO’s target to reduce deaths from air pollution by two-thirds by 2030. It works in India, the UK, and east and south-east Europe but has plans to expand to a region or country in Africa and, subject to funding, aims to add a new geographic focus every year.
cleanairfund.org 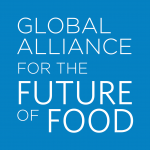 Global Alliance for the Future of Food
A group of foundations working to transform global food systems which formed in 2012, the alliance has a shared belief that transformational change is needed to ensure a future of food that is sustainable and equitable in the light of issues like climate change, shifting economies and demographics, and health. The alliance aims to strengthen evidence for global systems change, bring together key food systems actors, and stimulate action for transformational change. Rather than a funder in its own right, it is a platform for developing ideas and collaboration among its members, who are principally drawn from Europe and the US, but also include the Azim Premji Philanthropic Initiatives (India) and Instituto Ibirapitanga (Brazil).
futureoffood.org

Alliance’s December 2021 issue will be focused on food systems and philanthropy.

Environmental Funders Network
A UK-based group of foundations, family offices and individual donors supporting environmental causes, the Environmental Funders Network’s aim is to amplify the effects of environmental philanthropy by building relationships and sharing intelligence between funders, as well as producing research, such as a recent publication which highlights in climate philanthropy. Since it was set up in 2003 with support from the Goldsmith Foundation, 170 trusts and foundations have been involved in its work, each asked for a membership contribution graduated according to the scale of its environmental grantmaking. Though not primarily a grantmaker, it nevertheless administers a rapid response fund, under which applicants can receive up to £25,000 to enable them to respond to an unexpected opportunity or crisis.
greenfunders.org

C Team China
To raise awareness of the climate crisis among companies and the general public (though its focus is particularly on business), business leaders and environmentalists set up the China Champions for Climate Action, or C Team, in 2107. C Team supports Chinese entrepreneurs to be leaders in addressing climate change, promoting green innovation, the transition to a green and low-carbon and sustainable and eco-friendly development. C Team holds seminars and training workshops, compiles climate action guidelines for industry, collects corporate climate action cases, and organises entrepreneur delegations to participate in the UN Climate Change Conference.
cteam.org

The Global Fund for Coral Reefs
One of a number of funds which pools funds for a specific cause, the Global Fund for Coral Reefs (GFCR) was launched in September last year by the Prince Albert of Monaco Foundation and the Paul G Allen Family Foundation during the UN General Assembly. A blended finance mechanism, it will attempt to raise $500 million over ten years to increase resilience of the world’s coral reefs and the communities that depend on them. The fund is accepting contributions from UN member states, foundations and corporate donors. As the blended finance label suggests, it wants to attract both grants and investment and has set a target of raising $125 million in grants ahead of COP26.
globalfundcoralreefs.org

Global Alliance for Green and Gender Action
Promoting collaboration and exchange between the women’s rights and environmental justice movements, the Global Alliance for Green and Gender Action (GAGGA) is an initiative led by the Central American Women’s Fund, Fondo Centroamericano de Mujeres in cooperation with Mama Cash and Both ENDS, an environmental justice organisation based in the Netherlands. Launched in 2016, the initiative involves funds and organisations in more than 30 countries in Latin America, Africa, Asia and Europe, and aims to induce development aid donors, foundations and the private sector to increase the funding they provide for work at the nexus of women’s rights and environmental justice.
gaggaalliance.org

UNFCCC: The United Nations Framework Convention on Climate Change. One of three UN conventions launched at the Rio ‘Earth Summit’ in 1992, whose objective is to stabilise greenhouse gas concentrations ‘at a level that would prevent dangerous anthropogenic (human induced) interference with the climate system’. It has 197 signatory countries.

COP: Conference of Parties. The decision-making body of the UNFCCC which meets yearly to assess progress on the conventions. The 26th meeting of this body (COP26) is scheduled to take place in Glasgow in November this year.

NDCs: Nationally determined contributions which governments undertook to prepare and monitor under the Paris Agreement signed in 2016 on what they would achieve in terms of climate action.

NET ZERO: The target impact of greenhouse gas emissions on the global climate by mid-century in order to keep the mean temperature increase to within 1.5°C as agreed in the 2015 Paris Climate Accord.