There will be numerous events taking place this year commemorating the 20th anniversary of the fall of the Berlin Wall, among them the CEE Trust’s Civil Society Forum in Bratislava in September and the European Foundation Centre and Grantmakers East Forum conferences in Berlin in November.

What kind of atmosphere will prevail and what key messages will be sent to the outside world remains to be seen, but I am sure there will be less celebration and joy than at post-1989 donor conferences or the ‘ten years after’ EFC gathering, which also took place in the capital of a reunited Germany in 1999.

As before, I am looking forward to these meetings. In advance, I want to share with readers of Alliance some of my personal assessment of the last two decades and raise a few harder, I believe unavoidable, questions.

Then
Western donors knew very little about the vast territory of post-communist Europe. Full of good intentions, they reacted quickly and positively to requests for assistance from enthusiastic groups of East Europeans who had abolished oppressive regimes and started to build open societies based on the rule of law and political and civic rights. Public and private donors, European and American alike, allocated significant financial, technical and human resources to new challenges in the East. They developed new alliances, networks and forums to maximize their impact. 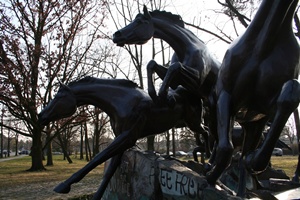 Donors know a lot about practically every corner of the very diverse Central and Eastern Europe region, and about the peculiarities of the people and societies that existed for five decades in isolation behind the Iron Curtain. They can claim that they assisted in an unprecedented sociopolitical and economic modernization of these countries and their communities.

However, they are much less enthusiastic, owing to unforeseen setbacks in some CEE countries that have ‘graduated’ to the EU, where populism and nationalism have emerged in the post-accession period. Most Western Balkan countries, although making steps towards the EU, are only slowly overcoming the legacies of devastating wars and ethno-religious conflicts from the last decade. In post-Soviet countries various forms of quasi-democratic or authoritarian systems are evolving and conflict and disputes are occurring among them.

Then
Donors were among the forward-looking idealists who believed in and promoted ‘Europe whole and free’. They encouraged and supported many projects to help East European countries to reform their obsolete political, social and economic systems and to develop the civil society organizations and culture of civic participation necessary to enter the club of the prosperous European family.

Now
Owing to the radical reforms and fruitful East-West cooperation, ten post-communist countries have joined the EU in the last two decades (Estonia, Latvia and Lithuania; Czech Republic, Hungary, Poland and Slovakia; Slovenia, Bulgaria and Romania). Many others in the Western Balkans, such as Albania, Bosnia and Herzegovina and Serbia, and post-Soviet countries such as Russia itself, Belarus, Ukraine, Georgia and the Central Asian states, are still struggling or muddling through.

In the meantime many new local donor organizations (grantmaking or hybrid foundations, community foundations, foundations created by wealthy or famous individuals, governments or companies) have evolved in Central and Eastern Europe and have become partners of Western philanthropies. It is often overlooked that the size, scope and impact of these still young CEE donor entities are still well below those their western counterparts. They are unable to fully participate even within the EFC, which should address this issue (unless a number of CEE countries are represented soon on the Governing Council, I believe we are risking serious division).

Then
Particularly the first decade of the post-1989 evolution was a golden age of democracy and civil society building, of which the western donor community was a significant part. Donors and CEE civic groups had a great impact on the democratic transition and the European enlargement debate. The Western model of state and free market was taken as a blueprint and practically nobody in our region questioned its efficiency and transformative power. Similarly, alliances created by these states, namely the EU and NATO, symbolized quality, cohesion and steady progress. Public-private transatlantic partnerships were realized within understood frameworks and brought measurable results.

Now
The evolution of the US after 9/11 and Bush’s domestic and international policy have profoundly changed the efficiency, self-confidence and international credibility of this superpower. On the other side of the Atlantic, the enlarged EU has started to suffer from ‘digestive’ problems – enlargement fatigue and a weakened will to adopt the new rules and mechanisms necessary to act more effectively in a globalized world where strong new players have emerged.

Moreover, some negative trends in new EU member states have emerged alongside the failures of the  ‘colour’ revolutions in Georgia and Ukraine, despite their initially inspirational leaders, and the emergence of a neo-imperial and energy-rich Russia which has decided to build a different political system and to confront the West. For many donors used to operating with enlargement in mind and under a civil society building-democracy assistance paradigm, it is very difficult to adapt to this new, more ambiguous situation.

The donor community has mostly lost its ability to reflect on these harder trends and to develop original and effective approaches. The focus on the ‘practical and concrete’, trying to avoid sensitive political and advocacy activities, has begun to prevail and the public visibility, recognition and respect for donors by political leaders and the public have decreased.

Then
The economy in the US and EU was booming and admired all over the world. It generated significant resources for foreign aid, philanthropies included. New markets in the CEE region welcomed western companies, which started to change the habits and practices of what were formerly centrally commanded economies. Private business introduced the concepts of corporate philanthropy and corporate citizenship into post-communist Europe.

Now
A previously unthinkable financial and economic crisis hit the US at the end of last year and spread quickly to Europe and other parts of the globe, putting in question the fundamentals of liberal democracy and the free market economy. Not only banks and companies but also many corporate foundations and other donors lost significant amounts of financial resources and have been forced to rethink their operations and programmes.

It seems to me that the donor community, and private philanthropy in particular, is slightly paralysed in this situation. I am afraid that governments will be far too dominant in dealing with the crisis, leaving behind civil society actors, philanthropies included. Many donors and civil society organizations may be pushed to become implementers of state programmes or face closure. And not only in CEE countries.

What I write is from my rather ‘NGO-centric’ point of view. Although I may be painting a bleak picture, I have not lost hope and drive and am ready to join those many who are trying to stick to the original passion, spirit and action which emerged as a gift after the fall of Berlin Wall and the Velvet Revolution in my own country 20 years ago.

Milena Leneva – What democracy means to me

I think the most important thing is the feeling that something depends on you. Elections that take place once every four years are not that significant for people. People need to know that their life depends on their own efforts. Active participation in your community and a guarantee of the basic human rights – working courts and police – these give you the sense of democracy.

Very, though there is a lot more to be done. There always will be a need for focused efforts to ensure active participation, and it is difficult for people who are not organized and who are not working together to persist in these efforts. I really believe that this is getting better in Bulgaria. Not only are there more NGOs but some of them are having significant and visible results, so people rely on them and turn to them for help when it is needed

I think there are more opportunities than people make use of, because it often takes a lot of effort. The regulations in Bulgaria make it difficult and time-consuming. But my opinion is that those who want to can find a way to participate.