5 insights on social investment in Asia

Daan Utsav started in 2009 as Joy of Giving Week. Since then it has gone from strength to strength, with millions getting involved, largely in volunteering and informal giving. Could this develop into more formal, organized giving, Caroline Hartnell asked Venkat Krishnan, founder and former CEO of GiveIndia and one of the leading lights behind Daan Utsav. Krishnan isn’t sure: people may just want to do more informal giving. But the empathy this creates may itself help to promote greater social justice – though not by the rights-based route traditionally espoused by human rights activists. 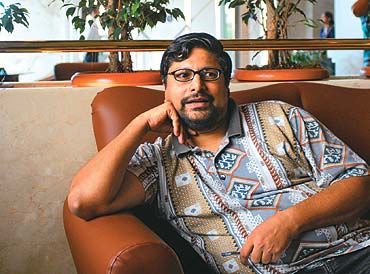 Can you tell me how the first Joy of Giving Week came about?
Around 2005, Ingrid Srinath, then at CRY, and Matthew Cherian, then at HelpAge India and I got together, and we talked about what we could do to deepen the culture of giving in India. We came up with the idea of a national giving day, based on the idea of telethons in the UK and US, but at that time we were all CEOs and none of us had the bandwidth to do anything about it.

In December 2008, a group of 30-40 people from different walks of life got together again to brainstorm the idea. We came up against an immediate difference of opinion about which day of the week would be best. People from corporates and schools favoured a weekday so they could engage employees and students. Others said it had to be a weekend, when people have some time to themselves.

So we expanded from a giving day to a giving week. It was to be a weeklong celebration of giving, not owned or controlled by any organization but something the whole country celebrates. At first we called it India Giving Week. Then an ad agency came up with the idea of Joy of Giving Week. So that’s how the idea was born.

And did the idea take off?
Even in the first year there was a lot of traction. The focus initially was on raising money through large fundraising events. A bit over US$2 million was raised and there were over 1 million givers – including volunteering and giving in kind. There were 10 or 12 large initiatives.

For example, Goonj ran a collection of clothes in 40 cities. Fourteen hundred schools participated in the Design for Change contest, Riverside School’s idea for children designing solutions to social problems that bothered them. This last is now a global event, taking place in around 40 countries. The Joyfest organized by Jam Magazine involved 250+ colleges.

By 2014 around 4 million were taking part, according to our estimates – though we realized lots of people were probably getting involved and not telling anyone. Our sense is that by now 6 or 7 million are taking part. So it is beginning to have a life of its own. We should be aiming for 50 million, at which point it will become part of the culture and happen on its own.

How did the Joy of Giving Week become DaanUtsav?
As the festival started growing, we began to reach out to lower-income people as givers.

In 2009 a group of 30 autorickshaw drivers donated $22 each; in 2010 another group of drivers took elderly people on a three-day pilgrimage to a nearby temple town. We approached 10,000 women in urban self-help groups and asked how we could help them and they said, why don’t you ask us to help others?

These lower-income givers were extremely generous but they couldn’t relate to the name Joy of Giving – apart from anything else, they didn’t understand English! By 2011 we thought we should change the name but it took us another two years to find a new name. There is no language that unites the country. Many don’t speak English; in the south many don’t speak Hindi; Sanskrit is too upper class. But Daan, the Sanskrit word for giving, and Utsav, meaning a festival, were familiar to most. So DaanUtsav is a festival of giving.

Is this mainly formal or informal giving?
Largely informal, maybe three or four times as much volunteering as giving. When people volunteer, they experience the joy of giving much more personally. Even in urban areas there is quite a lot of informal giving – for example, a group of people in a company might get together and share sandwiches with others. 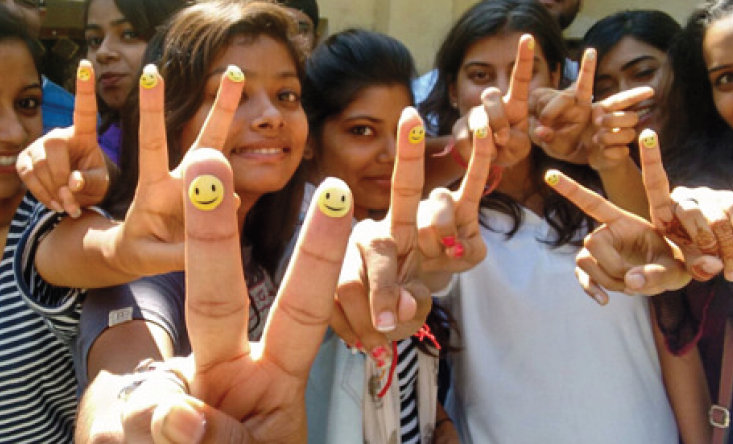 Is DaanUtsav encouraging wider informal giving – beyond the immediate family?
Yes, resoundingly so. Giving to your family isn’t counted as giving. It’s about going outside the comfort zone of your own social circle and giving to people you don’t know.

As people become better off, could this develop into more formal giving?
Is this a step on the way to supporting organizations for social purposes? Possibly – but informal giving is something people do, and they may just want to do more and more of it.

Take the giving fair organized in a small rural panchayat called Badamba in Odisha, 12 villages with a population of 25,000 in all. People from different castes came together and everyone gave what they could. Some people were both givers and receivers. You gave to a pool and took from the pool. So it wasn’t a caste thing or a family thing, but a community thing, a bunch of people getting together and saying, ‘these people need something, let’s give it to them’. Something like that is very unlikely to get formalized in any way, but it is likely to develop and sustain itself in the way it’s happening already. 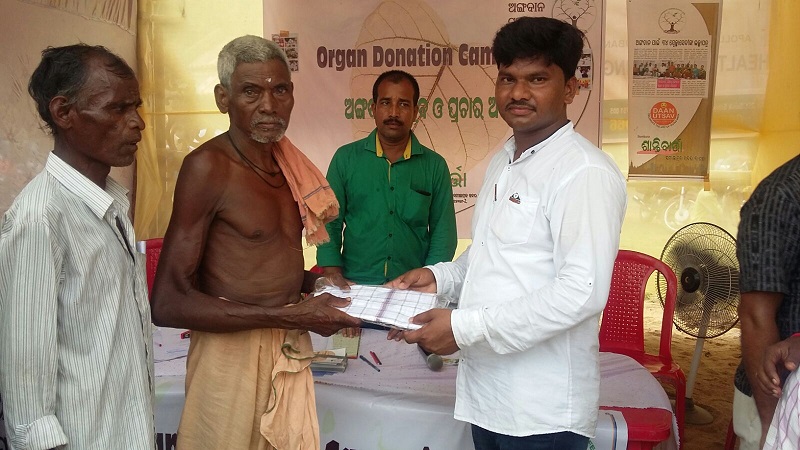 A resident of Badamba tehsil of Odisha receives a blanket at a DaanUtsav celebration in 2016.

But does this do anything to promote social justice?
This is a very transformative activity. The rights-based approach tends to put people into two camps, at loggerheads with each other. A more Gandhian approach (although he did do a lot of protesting!) is to try to get both sides together and build empathy. Then people will give because they recognize the equality of the other person as a human being who should have access to the basic things of life. If I’m blessed enough to have these things, why not share them?

How do we create empathy? How do we get people to begin to care about each other? This sort of giving creates a sense of gratitude, encourages a sense of togetherness.

Doesn’t this fall a long way short of rights: if you’re a poor person, having these basic things will still depend on the generosity of higher-caste, richer people rather than being your right?
I’m not saying social justice movements aren’t important. But the thinking here is that by creating greater empathy, you increase the chances of universal access to rights. Take gender rights: do you have to start with the assumption that all men are opposed to gender equality? Is the only way to have a battle of the sexes? We can help to achieve change by helping men to see the need for change and so to become campaigners themselves.

Empathy can be an important way to achieve greater justice. Gandhi wanted the British to leave India but he didn’t want the British to hate us, or see us as enemies; he wanted them to recognize the situation was wrong and it was right to leave. Both rights-based action and development of empathy are needed.

Harsh Mander is a prominent human rights activist, especially in the area of homelessness. He’s done a lot of work around ensuring that the homeless have a right to a place to stay at night, and that government buildings have to stay open for this purpose. He also works with DaanUtsav encouraging ‘Under the Stars’ events where middle-class urban people spend the night in the streets, eating with the homeless and sitting on the pavements where homeless people will sleep overnight.

This is about getting people who traditionally see the homeless as encroachers, a nuisance, to spend the night with homeless people – to talk to them, hear about their lives, hear how they do this not from choice but from a lack of choice. This builds different perspectives. After these experiences people are more likely to go to the government and say, why don’t these people have shelter? Why isn’t there more low-cost housing? People won’t campaign for the rights of others if they have no empathy, no understanding of their situation.

Now that Indian government restrictions have largely stopped the flow of foreign funding to Indian human rights NGOs, they will have to start raising money from other sources. Could middle-class Indians provide the support they need?
People say that people in India don’t support these causes, but I’m not sure I agree. The India Against Corruption movement was a massively successful crowdfunding campaign. Driven entirely through individual giving and volunteering, it was able to mobilize at least 50 million citizens into action on a subject as abstract as governance, and it resulted in the passing of legislation with significant implications. 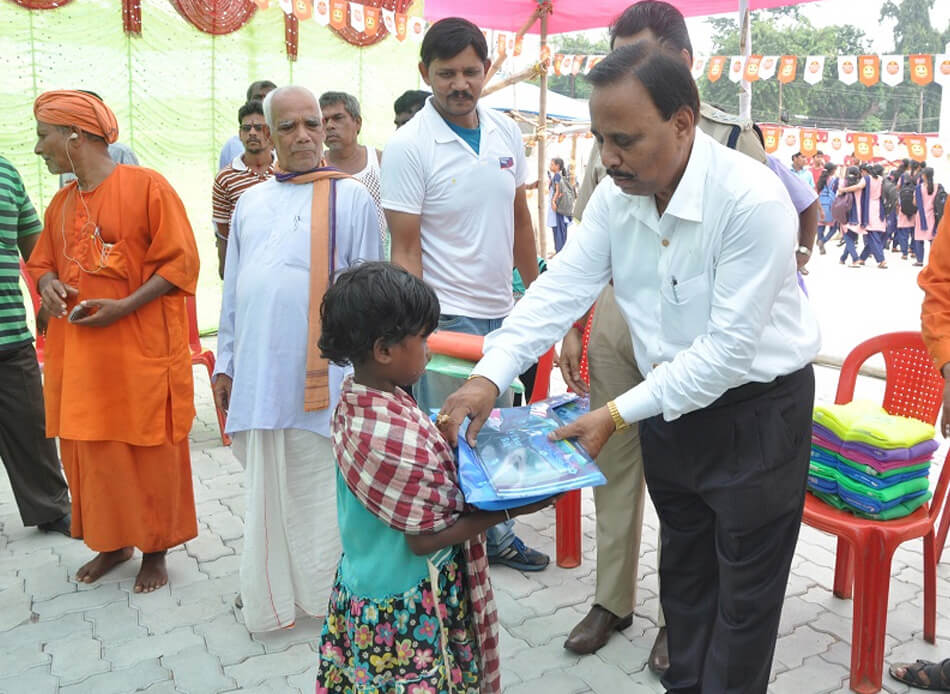 A child in Badamba is given donations at a DaanUtsav celebration.

It wasn’t the sort of issue that you’d expect to be successfully crowdfunded, but it was. Rights-based issues like this gain legitimacy from local support; not having it undermines their legitimacy.

If you go back in history, money for Indian freedom struggles has always been raised from mass public initiatives, certainly not from a few billionaires or from foreign funding. Since independence Dalit rights campaigns have been largely run through political movements rather than social interventions, and that’s still true today.

In the 1970s there was a huge land rights movement, the Bhoodan movement. A land campaigner, Vinoba Bhave, walked from village to village, talking to farmers about donating land for others in their village, and he got donations of a couple of millions of hectares of land. This was a pre-technology crowdfunding campaign. There is a history of supporting such campaigns. The challenge for many human rights NGOs in India is that we don’t yet have the pulse of the nation. We aren’t empathetic to the ground; we aren’t relating to the people.

Has working with DaanUtsav affected you personally?
People like me – upper middle class, western educated – we tend to think about what is right and what isn’t and come back with a logical framework for rights, but it doesn’t have an empathetic connection. Our desire for change can’t be articulated in a way that people can understand and relate to emotionally. This is the barrier we have to cross.

For me working with DaanUtsav has been personally transformational. In 2008 when I stepped down from GiveIndia I would have said that India needs to be shown what giving is. Since then I’ve looked at all these poor people, maids and autorickshaw drivers, and their giving traditions, and my views have changed. Yes, there are some who need to be taught about giving, but there are many more who are very aware of it. More of me is needing to learn rather than trying to teach someone else.

I think that’s what a lot of us need to go through. People working on human rights need to build deeper roots on the ground and a greater understanding of people and their issues.

Caroline Hartnell is a consultant to Alliance magazine and Philanthropy for Social Justice and Peace. Email caroline@alliancemagazine.org

This interview was carried out as part of a study of the role of philanthropy in India being carried out for Philanthropy for Social Justice and Peace.