Supporting tolerance and pluralism in Indonesia

In a move to increase the transparency of Chinese charitable groups, some of China’s most recognized philanthropic leaders combined to launch in July the China Foundation Center (CFC), a result of 20 years of sectoral self-regulation efforts.

Chinese non-profits have struggled with both state mistrust and public suspicion of mismanagement, misuse of donations or even corruption. In an effort to offset both of these, the Centre will make information about non-profit activities publicly available, its website initially housing data on more than 1,800 foundations across China.

The Center has been largely modelled on the Foundation Center in the US, which provided much advice to China’s philanthropic leaders on how to improve self-governance by using internet technology to benefit the entire sector. The CFC was initiated by 35 foundations as co-founders, a mix of public and private foundations, from the China Foundation for 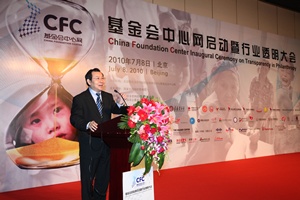 Poverty Alleviation, an organization under the government’s direct supervision, to independent philanthropic endeavours like the Jet Li One Foundation. Pictured right is Xu Yongguang, president of the Narada Foundation, which is the lead initiator of the CFC, speaking at the launch.