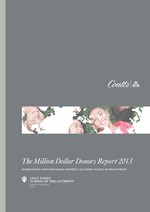 The new report studies donations of $1 million or more across six regions: the UK, the US, Russia, Middle East (GCC), China and Hong Kong. Working with the Indiana University Lilly Family School of Philanthropy and researchers located in all regions, Coutts captured information about 1,955 donations of $1 million or more, totalling $19 billion. The data is analysed by region and complemented by observations about key trends in major donor philanthropy, including the growing professionalization of the field, how donors do more than just write cheques, the growth of social investment, and the key role philanthropy plays in wealth succession.

‘Our first international report on major philanthropy across the regions studied illustrates how philanthropy plays a key part in the lives of wealthy individuals, families and corporations,’ says Mark Evans, managing director of Coutts Institute. ‘While we know that in some contexts we have unearthed only the tip of the iceberg and the true scale of giving will be higher than we report, the data collected offers insightful information about the nature of major philanthropy. By researching the nature and potential of donations of $1 million or more, we aim to inform and inspire philanthropy.’