European donors now have an easy way to direct support to frontline communities addressing dire threats to their environment and rights. Since 1993 Global Greengrants Fund has directed more than $45 million in grants to grassroots groups in 163 countries. It has now established a European arm based in the UK. Global Greengrants Fund / UK received charity status in April 2013.

Tapping into a global network of activist advisers, Global Greengrants makes targeted grants to grassroots groups working to protect and restore their environments and rights. It places a premium on local decision-making and leadership, emphasizing an activist-led model that does not prescribe or impose an agenda on grantees. Grants support grassroots leaders to make their voices heard – both in local decision-making circles and increasingly on the national and international political stage. 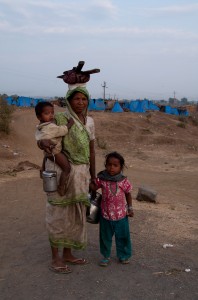 With a £3,500 grant from Global Greengrants / UK & Europe, an organization in the slums of Delhi is helping people from vastly different backgrounds find common ground so they can live together more peacefully. Elizabeth Weber

Global Greengrants UK & Europe has already made grants to groups in China, India, Kenya, and Bosnia and Herzegovina. In September, it will open a UK-based office with one full-time staff member.

The European arm’s first aim will be to connect donors in the UK and Europe to grassroots movements throughout Africa, Asia, Latin America and the Pacific Islands. But Global Greengrants’ US-based leadership says its goals extend well beyond increasing support to locally led projects. By establishing a European office, the group aims to increase European policymakers’ understanding of how issues such as globalization and climate change affect people in marginalized, underserved regions where very limited amounts of foreign aid fail to trickle down to the people on the ground who need the most support.

‘These are early days for Global Greengrants UK & Europe,’ says Stephen Pittam, chair of the UK & Europe board of trustees and a member of the global board, ‘and much is still to be determined. But we are committed to making it easy for European donors of all levels to support the critical work our grantees are doing all around the world.’