Almost three years ago, Funders for Reproductive Equity (FRE), a network of dozens of large, medium and small foundations, began a journey to place racial justice at the centre of our principles, programmes and practices. Despite work on race for nearly 20 years led by a Women of Color Working Group (WOCWG) involving numerous funders, events in 2014 – inside the network, in the ‘repro’ movement and in society at large, especially in the US – prompted uncomfortable conversations and serious soul-searching about what more FRE needed to do to make explicit cross-cutting commitments to racial justice, and help funders engage constructively on this vital issue.

Race is by no means a new topic for us. Women of colour have long faced the greatest barriers to reproductive equity and justice including coercive fertility control practices, denials of reproductive health care and targeted policing and punishment.

For the past 20 years our working group has been committed to strengthening the role and leadership of women of colour in reproductive health, rights and justice. It now includes nearly every US domestic funder in our membership.

Among the group’s successful efforts are:
1.) the establishment of the Catalyst Fund, which supports organizations, particularly those led by women of colour, that use grassroots organizing to advance reproductive justice policy

2.) a first-of-its-kind national leadership training programme for reproductive health, rights and justice advocates representing a broad swath of organizations with varying degrees of power and privilege, supported by a group of funders in our membership. 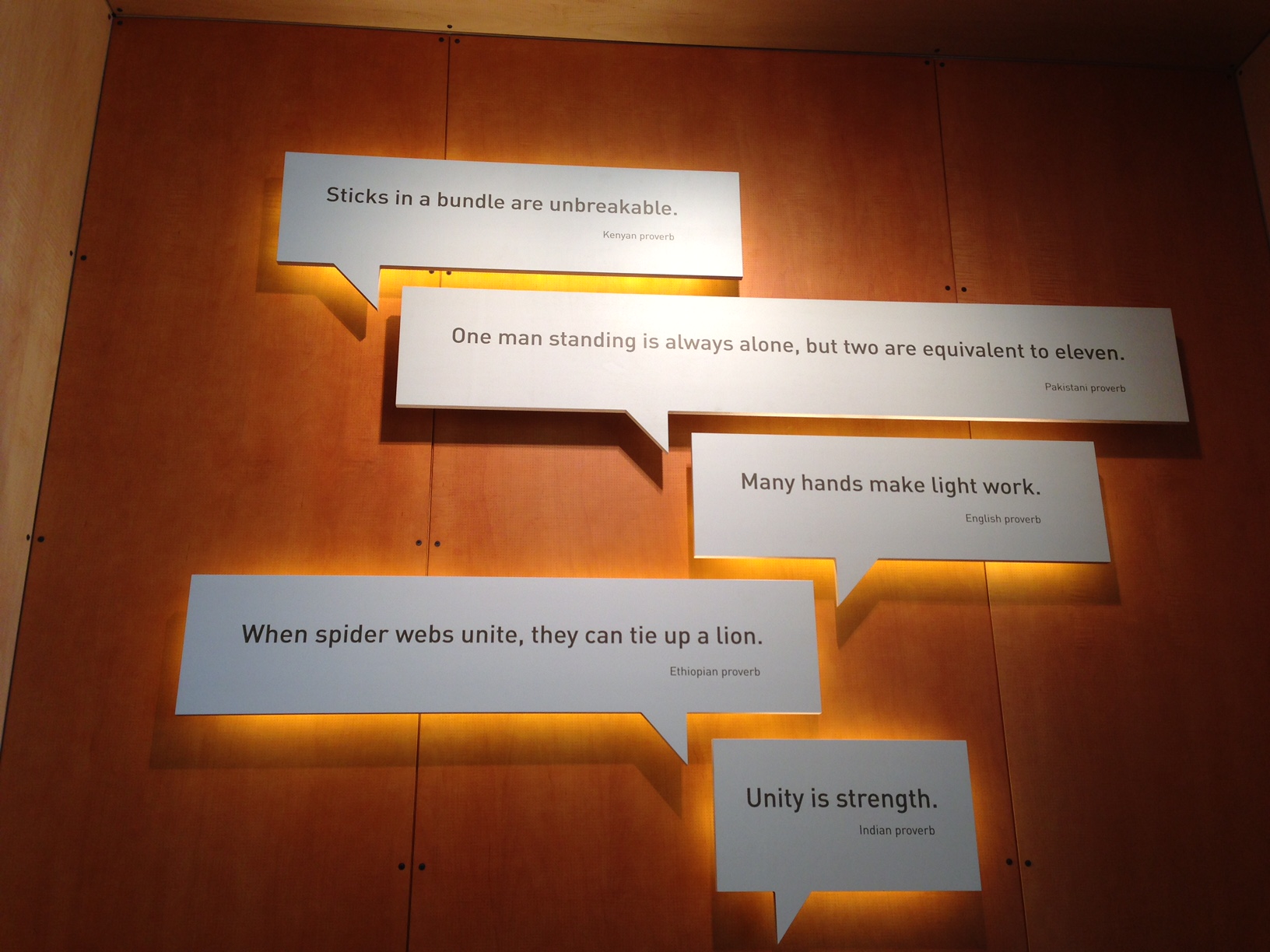 Beyond building leadership skills for individuals involved, the programme aims to boost trust among leaders of a movement that has historically experienced fragmentations, often because of racial dynamics.

Putting race on the agenda
However, despite the groundbreaking work of the WOCWG, we had little experience as a network of openly talking about race. One of the ironies is that as the working group grew, conversations that focused explicitly on race declined. 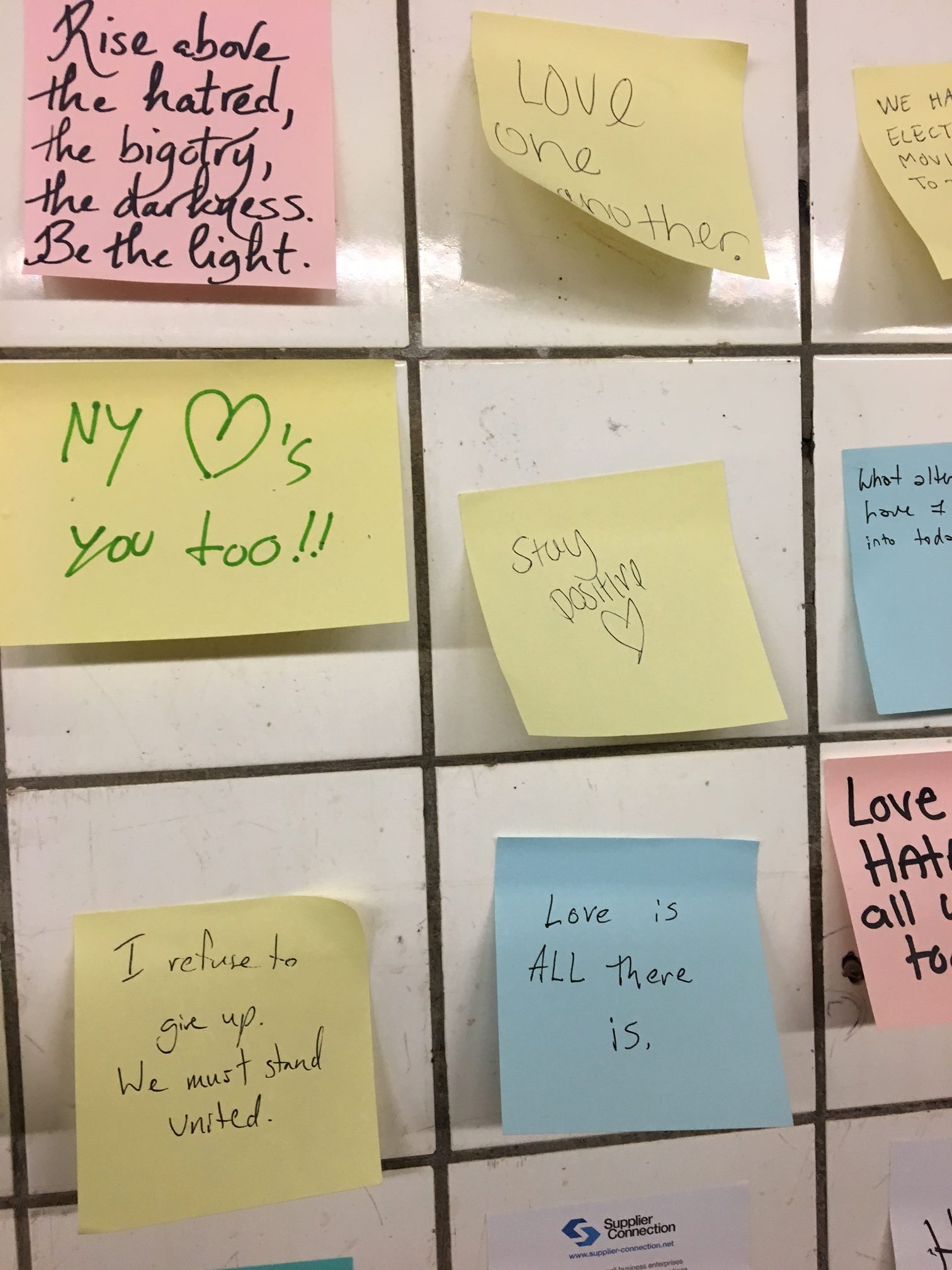 Post-It notes written in New York city subway after the 2016 US election.

‘These unresolved tensions around issues imbued with race made necessary collaboration challenging and sometimes unintentionally hurtful,’ wrote one of our consultants in a memo. The events leading to our racial justice work were painful, too, but we felt they were too urgent to ignore. We also had faith that the strength of personal relationships in the network – one of its hallmarks – would enable us to overcome challenges.

Racism in the US
Our sense of urgency also came from the times in which we live. 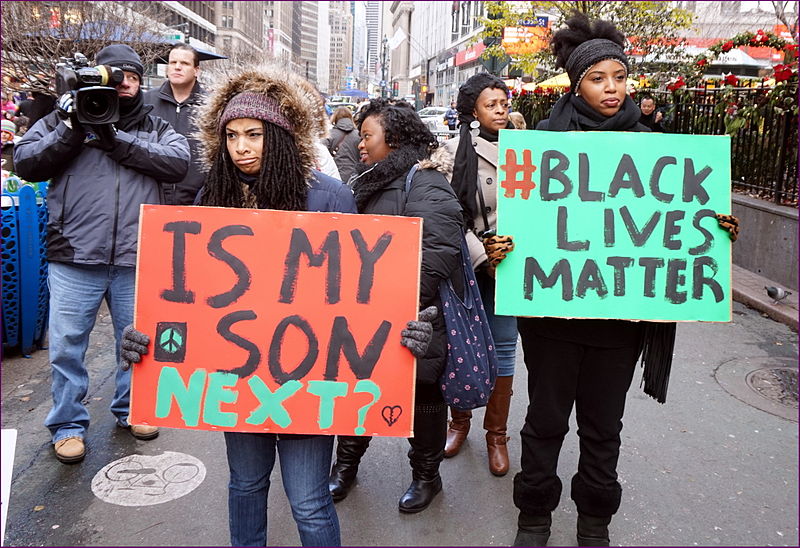 At the same time, the rise of the Black Lives Matter movement and a wave of new – or newly prominent – voices and writers on race and racism have awakened and enlightened many (but not enough) white people. These factors underscore the particular vulnerabilities of communities of colour and the urgency of defeating racism.

Developing a roadmap
After thinking through our community’s needs and laying out a roadmap, we began at, well, the beginning, with basic information and essential tools.

Our members told us that they needed to deepen their skills to be able to talk about race, so we planned a set of activities that would help them do so. 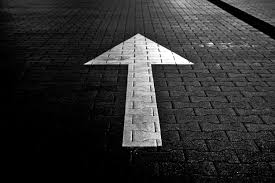 Where will the road ahead lead?

We retained a consultant with deep experience in both race and philanthropy to develop and lead a tailor-made seminar offered to all FRE members.

In interviewing a representative sample of our membership, she found that ‘programming in [FRE] at large was calibrated around abortion and focused on the needs of white middle class women, not by conscious intention, but rather as the default stance in a society that marginalizes not only women, but women of color and low-income women.’

Shared language
A sizable percentage of FRE members participated in the subsequent daylong session to develop a shared vocabulary for talking about race, engage in constructive conversations about race and philanthropy, and practice collaborative problem-solving on issues imbued with race.

Next, another expert led a workshop on having “courageous conversations,” aimed in part at developing skills that would encourage grantmakers to discuss racial dynamics with grantees.

We then delved more deeply into the role funders play in dynamics around race and power. For example, women of colour leaders and women of colour-led organizations working mainly at the state and local levels have been frustrated by joint advocacy campaigns. 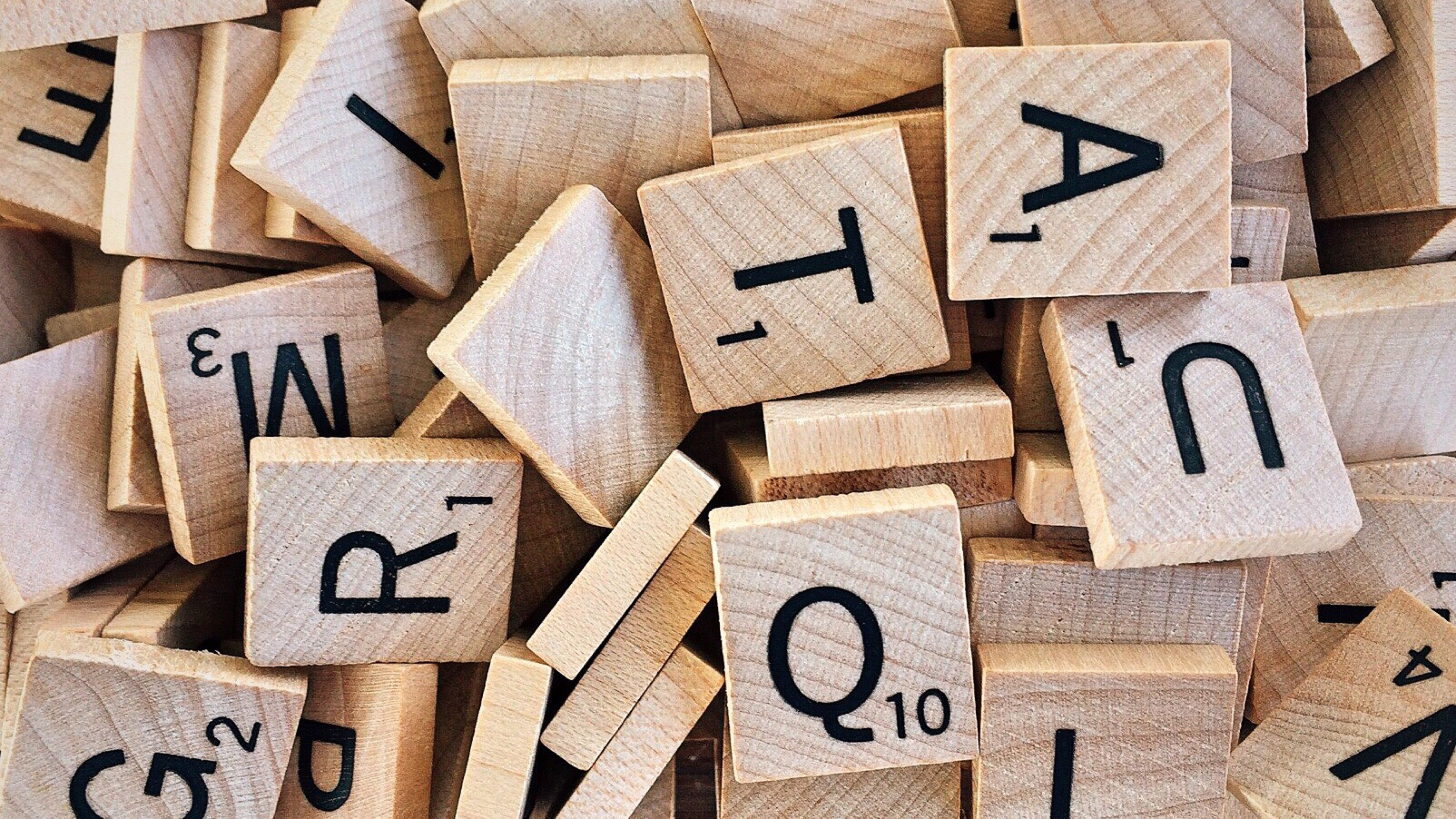 The challenge of learning the language for progress.

Mainly white-led, better-resourced, national organizations typically called the shots with little regard for the experience and views of advocates on the ground.

To upend this dynamic, we hired consultants steeped in racial justice and organizing who interviewed dozens of grantees, led a workshop for members and then created frameworks for both grantees and funders interested in more equitable partnerships.

One of the central arguments of the publication they created, Authentic & Equitable Partnerships: A Framework for Building Movements, runs: ‘the process of building authentic and equitable partnerships requires not only having conceptual agreement about guiding principles and practices for mutual accountability or a shared internal power analysis and commitment to intentionally balancing power, but also the skills to bring those conceptual agreements to life.’

Still to come is an impact assessment tool to inform our programming. These kinds of tools, says Race Forward, an NGO that advances racial justice, offer a ‘systematic examination of how different racial and ethnic groups will likely be affected by a proposed action or decision’. 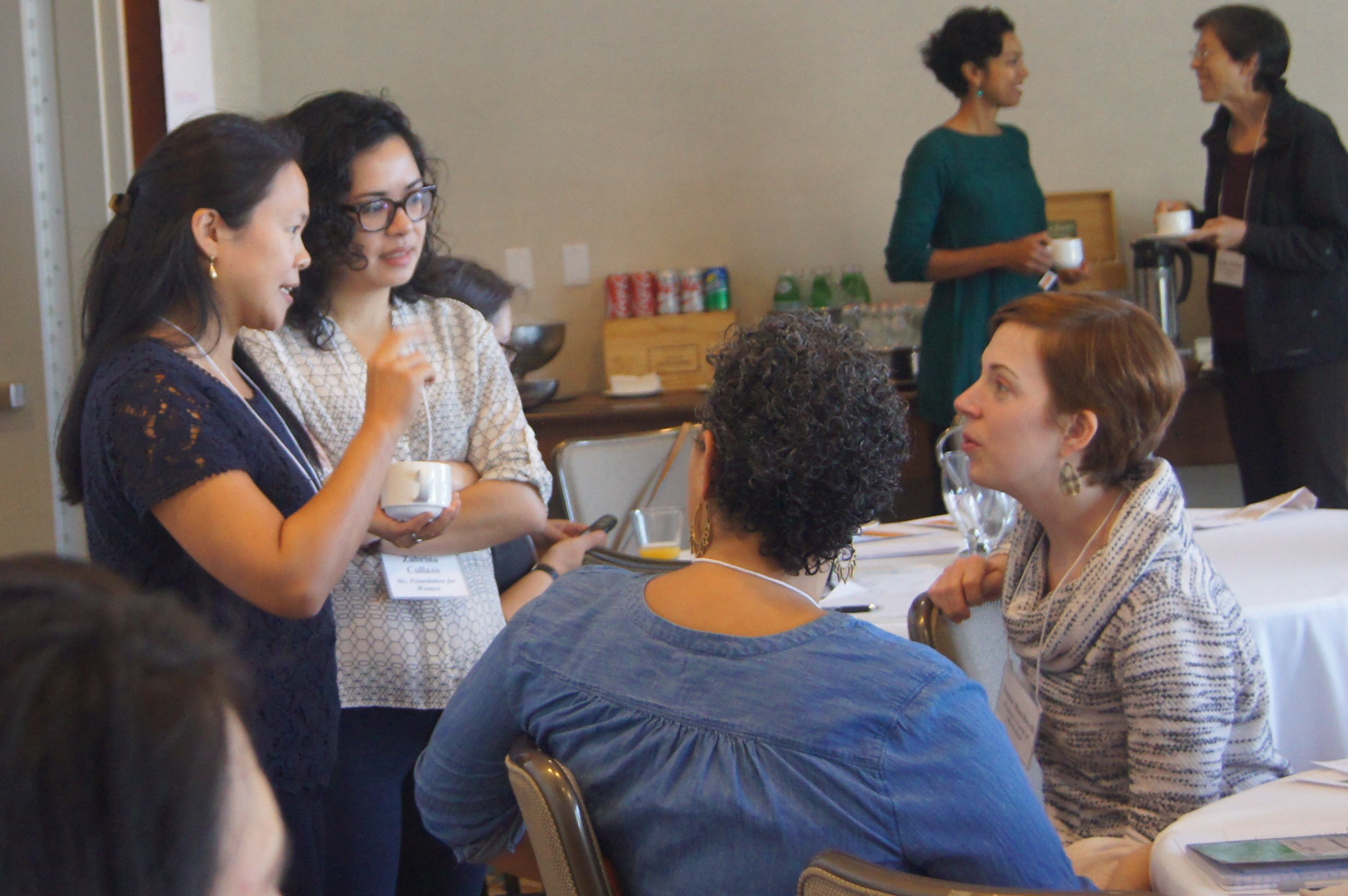 Attendees confer at a FRE meeting.

Our centering of racial justice has brought to the surface new questions about FRE’s identity, such as whether FRE’s mission includes taking a stance on issues beyond increasing resources for the repro field broadly.. Our board and staff leadership recently decided to sign an open letter to philanthropy urging the sector to ‘increase funding to organizations led by people of color, particularly those working at the state and local level’.

Some members demurred, pointing to a long-standing policy barring the network from taking on an advocacy role. Others applauded, saying that this moment calls for bold action and promotion of just causes. We continue to grapple with this question.

Another question concerns resource allocation. Is it wise for our network to set a goal for a certain percentage of grants or grant dollars to support women of colour-led work in our field? Does this help encourage grantmakers or alienate them?

Beyond the US
While the centering of race has focused on the US reproductive justice movement, our membership includes many funders that fund internationally – some exclusively so – who see parallels in their work. Discrimination and exclusion, on the bases of race, gender, ethnicity, caste, religion, age, ability, sexual orientation etc, persist everywhere.

Often philanthropic intent is to address inequities and marginalization, yet in reality, funders’ roles may be more ambiguous if they do not explicitly examine their own policies, staffing, resource allocation, grant choices and power dynamics. 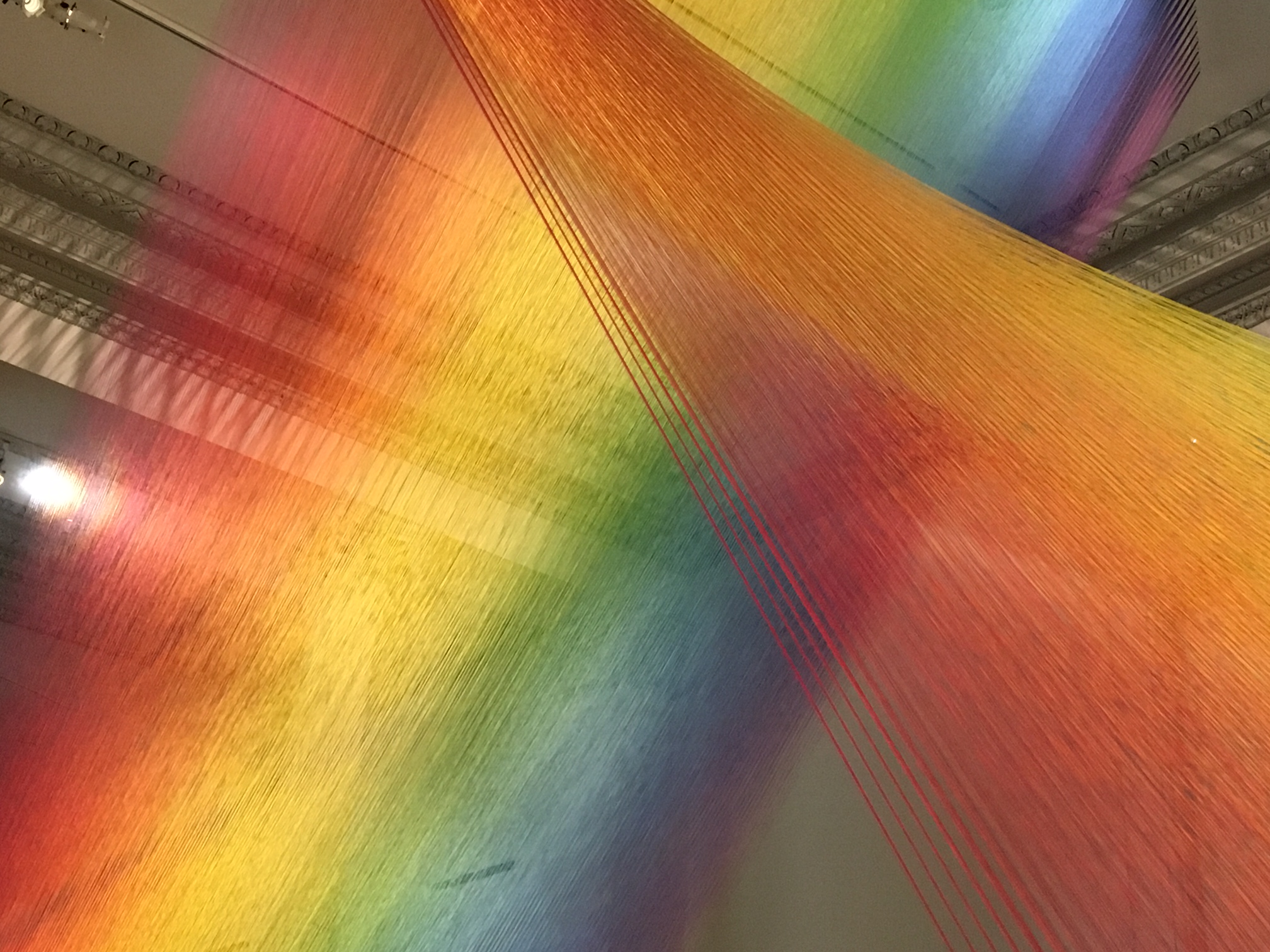 Will it be possible to balance the status quo?

Our journey has taught us some valuable lessons that pertain to other forms of oppression. Funders need to explore their discomfort to engage in challenging conversations around topics often seen as undiscussable – and to gain skills to be able to do so.

Let’s look at who holds decision-making power in our systems and relationships with grantees.

We need to examine what our funding tells us: which groups and individuals get more resources, more visibility and more representation of broader movements – seats at the table.

A journey to be enlightened philanthropists requires humility, openness and an willingness to hold up a mirror to our own practices, seeking and listening to honest input from grantees and others about power dynamics and our role as funders, and realizing that the path may be neither clear, nor well-trodden but that we must push on.

It is critical for philanthropic leaders in all sectors to acknowledge the role and impact of all axes of oppression: race, gender, sexual orientation and so on. In some ways, FRE is fortunate. Because of the subject matters we address, FRE’s members already have a deep understanding and commitment to gender equity and sexual orientation/identity. We still have a way to go on race, but we are on the right path.

How can philanthropy do the most good if it doesn’t reflect the society it seeks to serve? Alliance’s new issue investigates philanthropy’s diversity challenge and features perspectives on the topic from philanthropy practitioners worldwide. Subscribe here to join the debate.

Keep on, keeping on: resilient philanthropy in Turkey