#NCFF17 – What is the role for community foundations in a world full of charities?

In situations where violent conflict is imminent or endemic, the best place to foster peace is in local communities. Members of the Foundations for Peace Network report from Indonesia, Bangladesh and Sri Lanka

Striking deep roots across the nation
Indonesia has seldom been free of armed conflict: secessionist, inter-religious, natural resource conflicts, violent extremism. Many are left unresolved and even unrecognised, spanning decades, some have seen peace agreements signed and forgotten, but even with peace, much remains to be accounted for. When there is impunity for gross human rights violations and perpetrators are not only free but in power, for whom is this ‘peace’?

Under these circumstances, it is crucial that peace is built from the ground up. Peace-building in Indonesia is as dispersed across the archipelago as the conflicts it attempts to resolve. It functions unseen in the daily lives of local communities, not just in the national limelight where fragile political settlements are made. It is waged in all fields of life, including in the privacy of homes, as family violence is inextricably linked to protracted conflicts and post-conflict trauma. It engages communities from all of Indonesia’s diverse religious, ethnic and political identities, as all struggle daily to navigate a divided society. It encompasses community empowerment, inter-generational dialogue and structural change, as long-standing systemic discrimination underlies most of these conflicts. This kind of peace-building does not end with official declarations of peace. Its capacity to sustain itself is a crucial source of strength and credibility.

With the long legacy of conflicts, our grantmaking prioritises victims’ rights. It advances their social, economic and cultural rights and makes development more inclusive.

With the long legacy of conflicts, our grantmaking prioritises victims’ rights. It advances their social, economic and cultural rights and makes development more inclusive. We grow our relationship with victim communities through participation in a coalition working towards truth, justice and reparations for past violations. Our grantmaking strengthens work at the community level and links it to national advocacy platforms. As a result, victims of atrocities half a century ago – now elderly – are getting better access to needed public services. Women survivors of conflict are in stronger bargaining positions with the family, community and local government. Village communities, long stigmatised because of their proximity to sites of political violence, are starting to receive development projects. Voices silenced by political repression are now shaping inter-generational dialogue in cultural spaces and compelling the young to remember and continue the struggle for truth and justice.

When an earthquake-cum-tsunami recently hit Central Sulawesi, the site of inter-religious conflict and violent extremism, we initiated a special fund that integrated community resilience and conflict prevention into post-disaster reconstruction. After understanding the needs of our key partners, we set out to build an infrastructure of support that goes beyond funding. We brought in activists and community organisers from other parts of the archipelago who have had to face natural disasters themselves, including in post-conflict areas, to gain from their experience and insights. We initiated collaboration with activist-experts on social change to ensure that, alongside the community work, we also develop a collective learning process and build knowledge on conflict transformation in diverse contexts.

Our principal asset is our deep network that has been built over two decades and is continuing to grow through our active engagement in Indonesia’s vibrant social movements. As an activist fund set up in 1995 to support pro-democracy activism under an authoritarian regime, we were born into the peace-building movement. Our four thematic funds – on gross violations, violence against women, cultural movements for diversity, and ecological justice – are managed with leading civil society organisations and networks in the field. This ensures our reach into all corners of the archipelago, strengthens the quality of our engagement, and helps the local initiatives we support to resonate in the struggles of broader national movements. Trust is our most valued capital and its successful preservation, we believe, places us securely as part of our country’s social capital.

Being an integral part of social movements has its downside, however. We share with our partners and grantees the fragility of civil society. We are far from the mainstream, often misunderstood and stigmatised. There is even less understanding of community philanthropy and organisations like ours that want to build a reliable infrastructure for it. Our funding from domestic sources is limited and precarious, and we have no core support. While Indonesia’s giving culture is strong, it is directed mainly at religious causes, welfare needs and emergency aid, not toward peace and human rights. The 2018 Doing Good Index ranked Indonesia the lowest, with Myanmar, among 15 Asian countries in having a conducive landscape for philanthropic giving.

Despite the challenges, we remain confident about our future because we meet a need. We have found strength, through the Foundations for Peace network, in the company of similar activist funders facing parallel predicaments. Together we create new spaces, share good practice and build our collective voice.

The international community of philanthropists has a role to play in supporting community-centred activist funders addressing the world’s most complex problems from the ground up.

Sustaining a fragile peace
Bangladesh was born in 1971 out of a nine-month armed conflict in which three million civilians were killed and over 200,000 women raped. The country was left in ruins and on the verge of famine. Despite this, 48 years later, Bangladesh has emerged as among the fastest growing economies in Asia, with improvements in most social indicators such as health, education and a marked reduction in poverty. This has been made possible by the resilience of ordinary people, the efforts of government and the private sector and, in no small part, the work of community philanthropy.

Bangladesh has a rich tradition of community philanthropy in the form of donations for setting up schools, clinics and more recently mobilising community groups to prevent radicalisation, drug abuse and other forms of violence. It has been the foundation on which today’s vast NGO sector stands.

Micro-credit, informal education, universal immunisation, garment industries, and  remittance from migrant workers are some of the country’s key innovations and all have their roots in community philanthropy. However, this peace and harmony is fragile and in an overpopulated country where poverty is still endemic and where the threat of radicalisation, communal discord and violence against women pose threats to this cohesion, the work of community foundations may also be key to the future peace and prosperity of Bangladesh. 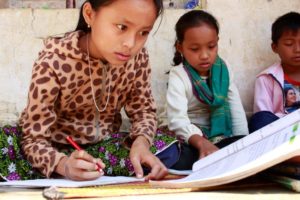 Bangladesh has a rich tradition of community philanthropy in the form of donations for setting up schools, clinics and more recently mobilising community groups to prevent radicalisation, drug abuse and other forms of violence. It has been the foundation on which today’s vast NGO sector stands. It has provided the basis for volunteerism, not-for-profit work and has contributed to maintaining the peaceful coexistence which is crucial not only for the relationships between and among men and women or different minority communities but also between mainstream communities, civil society and state.

Among the important contributions towards the maintenance of peace and social cohesion by local foundations has been the prevention of violence against women and girls. They have been champions in the prevention of child marriage, supporting changemakers to stop domestic violence, and campaigns against acid attacks.

Their contribution, though, extends beyond the support of efforts to counter more overt threats to peace and justice. Small initiatives are crucial to this, too. Community foundations have supported indigenous children to study in their mother tongue, they have provided boats to carry children to schools during floods, offered protection to minority groups during times of ethnic strife, mobilised communities to demand good governance and access to services. All these things have built local trust in, and the credibility of, these organisations. It is not too much to say that such community philanthropy initiatives have provided the building blocks that support and nurture the traditions of local giving where the larger donors or international organisations do not operate. It is vital for the future of Bangladesh that they themselves are supported.

Spotting the early warning signs
The Neelan Tiruchelvam Trust (NTT), an indigenous philanthropic organisation in Sri Lanka, was born at the height of internal armed conflict in the country which spanned nearly 30 years. NTT’s painful genesis made it inevitable that conflict resolution and peace-building would become a core element of its work. The success of NTT’s support for conflict resolution and peace-building work depends on two factors; the strategies it employs in supporting its grantees and the initiatives/issues it supports. Often, these are intertwined and inter-dependent.

Community organisations are therefore pivotal not only to efforts to develop resilience, sustainability and to effect long-term change in a post-war society but to also function as interlocutors, particularly to resolve inter- and intra-community conflicts.

As an indigenous grantmaker NTT has a permanent presence in the country and its sound knowledge of the people, politics and context enables its grantmaking to be attuned to the constantly changing landscape, especially during times of tension and conflict. Further, its flexibility and evolving grantmaking strategy has enabled the trust to do what external grantmakers didn’t or couldn’t do due to political factors, both local and international. For instance, in a repressive post-war environment, while other grantmakers moved out of Sri Lanka or stopped supporting certain kinds of rights work, NTT continued to support human rights protection. 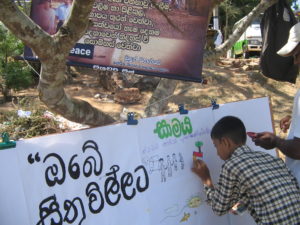 One of the core elements of NTT’s support for conflict-resolution work is its focus on community organisations. These organisations possess deep knowledge of the needs and concerns of the communities in which they work and have their trust. Community organisations are therefore pivotal not only to efforts to develop resilience, sustainability and to effect long-term change in a post-war society but to also function as interlocutors, particularly to resolve inter- and intra-community conflicts. Given that the root causes of the armed conflict have not been meaningfully addressed even ten years after its end, Sri Lanka continues to be plagued by identity conflicts and resultant violence. In such a context, community organisations, due to their deep roots in the communities, are best placed to identify potential conflict hotspots through consistent monitoring and to provide early warning. Moreover, that local grounding enables them to work with community leaders to defuse tension and prevent conflict in the first place.

NTT takes calculated risks to support new and pilot initiatives because it recognises that community knowledge and expertise has to be harnessed to find innovative means to prevent conflict and rebuild inter-community relations.

Another element crucial to responsive support for conflict resolution work is that the grantmaker should always be guided by local organisations in identifying and responding to the evolving needs and concerns of the communities. Supporting, for instance, initiatives that tackle historical, structural and systemic discrimination and marginalisation, particularly of vulnerable populations, such as minorities, is imperative to prevent conflict and rebuild inter-community relations.

To this end NTT has dedicated resources to supporting communities isolated from the focus of development budgets, since conflict between and within communities, particularly marginalised communities, is often ignored and can lead to broader conflict. In this regard, NTT takes calculated risks to support new and pilot initiatives because it recognises that community knowledge and expertise has to be harnessed to find innovative means to prevent conflict and rebuild inter-community relations.

Kamala Chandrakirana is chair of the board for Indonesia untuk Kemanusiaan.
Email: kchandrakirana2012@gmail.com