How interfaith philanthropy can minimize violence in the name of religion

Shouldn’t non-profit boards, registered as public bodies, represent the ‘public’? Shouldn’t they uphold the principle of diversity in board management? We believe they should. When we set up Dalit Foundation, we saw it as important that we didn’t limit support to scheduled castes. We took a broader view of Dalits as those who are discriminated against in order to include them in emancipatory and developmental processes. That also pushed us to have an eclectic board with members from different ethnic, religious, regional and caste background, with a similar spread of competencies in sociology, politics, state policy and grassroots engagement.

According to India’s CSR Reporting Survey 2016, compiled by global auditing firm, KPMG, Indian companies had spent Rs 6,518 crore[1] (US$980 million) on what are considered ‘developmental’ activities such as education, health, environment and rural development under the new corporate social responsibility (CSR) rules that came into effect in 2014.

However, there is nothing to suggest in the KPMG report or in other CSR studies released recently, that there have been any concerted efforts to overcome social, let alone caste, inequalities through this corporate funding. 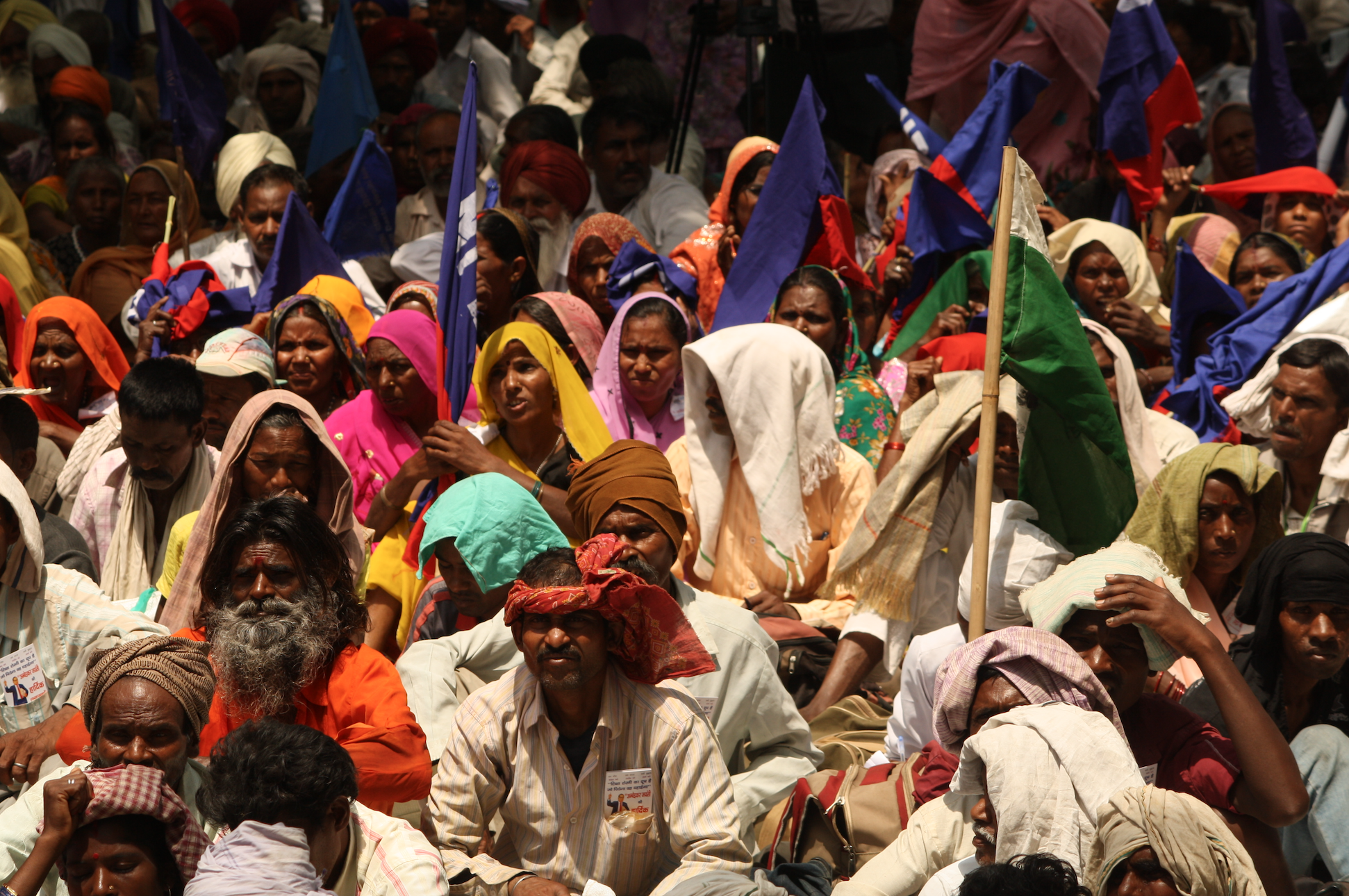 On the 122nd Birth Anniversary of Babasaheb Ambedkar, Indian jurist, economist, politician and social reformer who inspired the Dalit Buddhist Movement and campaigned against social discrimination, a national campaign on Dalit Land rights was launched across 300 districts in 20 states of India. Seen here is a peaceful gathering at Jantar Mantar, New Delhi. Credit ActionAid.

Last year, Maheshwar Sahu, a retired senior Gujarat government official, wrote a book, Small but meaningful: CSR in practice, in which he noted that Indian industrialists such as GD Birla, Jamnadas Bajaj, LalaShri Ram and Ambalal Sarabhai, were ‘influenced by Gandhi’s theory of trusteeship’, taking up problems of ‘untouchability, women’s empowerment, and rural development’.

However, none of the 11 case studies in Maheshwar Sahu’s book – which include well-known industrial houses like Cadila, Reliance, Adanis and Ambujas – provide any instance of taking up untouchability issues.

The reason for this neglect is not hard to find. A scan through the board of directors of the CSR wings of top business houses suggests that none of them offer representation to either Dalits or those familiar with issues of social justice.

Of the nine directors of the board of the Adani Foundation, six are from the Adani family. Neither the advisory team, nor the foundation management team, has a Dalit or anyone who can claim knowledge of social justice, empowerment and caste.

A scan through the board of directors of the CSR wings of top business houses suggests that none of them offer representation to either Dalits or those familiar with issues of social justice. 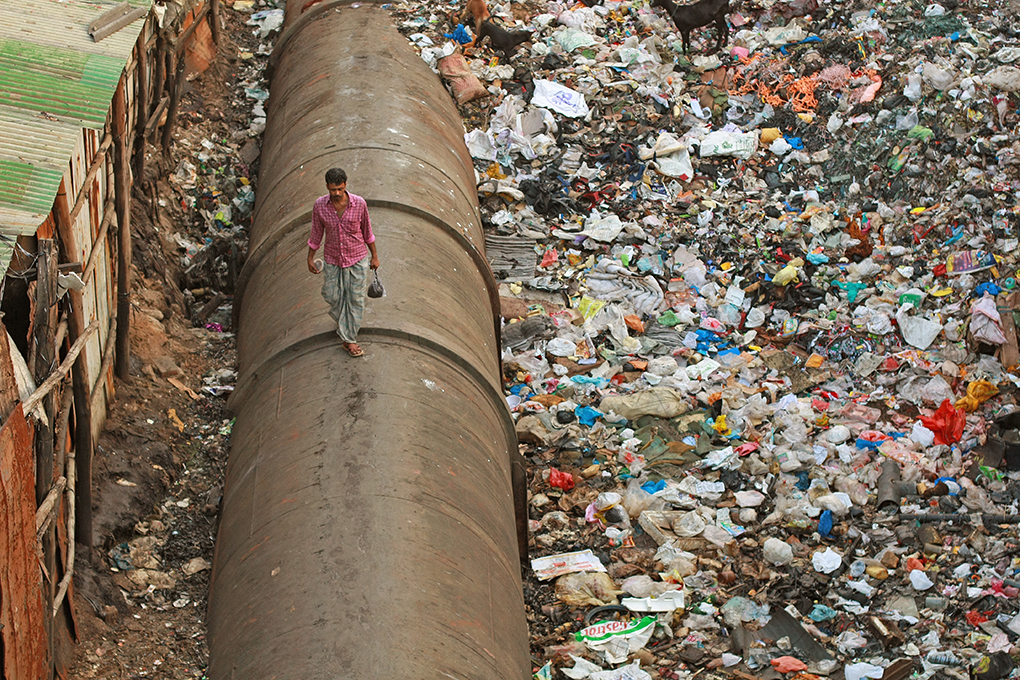 The journey from market to home for a resident of the Dharavi slum, Mumbai. Credit Meena Kadri.

An example of the effects of this is provided by the Swacch Bharat campaign, the prime minister’s nationwide cleanliness drive.

The government of India has urged corporate houses to contribute as much as they can to the campaign. However, the money that has been donated does not address the underlying issues.

For instance, it does not address the question of why Dalits are dying in sewers and septic tanks. As activist Bezwada Wilson puts it: ‘This campaign has nothing to do with making India free of manual scavenging. It is about building toilets – and toilets only. Does it talk about who is going to clean these toilets?’ The 12 crore toilets that have been built ‘might as well be 12 crore death chambers’, he concludes.

A recent study CSR in water, sanitation and hygiene (WASH), which surveys how corporates have been spending on the Swacch Bharat campaign, suggests that not only is CSR in India caste-insensitive, it is gender-insensitive, too.

Although ‘around 28 per cent of Indian girls do not attend school during menstruation due to the lack of sanitation facilities in schools’, says the report, CSR support for menstrual management facilities was ‘non-existent’.

Who can raise these questions but independent board members whose explicit role would be to align the company’s vision to a larger inclusive developmental vision?

Not having members on boards from disadvantaged communities is not only discriminatory, it is unprofessional. ‘Friendship boards’ may be acceptable when organizations are in their start-up phase, but they should become ‘accountability boards’ as those organizations develop and grow into ‘strategic boards’ as questions of impact and sustainability take centre-stage.

This development presupposes a shift of governance. The ideas that inform these boards have to come from thought leaders of those communities who are underserved or discriminated against. There are plenty of them in India.

Gagan Sethi is founder of Dalit Foundation and chair and founder of Janvikas.
Email: gaganssethi@gmail.com