Donors rarely make building public understanding a priority. Non-profits also tend not to focus on the long-term need to build public will; rather, they see it as a diversion of precious resources from spending on marketing or advocacy. In most cases, where the external environment is benign or the question is not the subject of heated public and political debate, this may not matter much. However, in the case of refugees and migrants, where the issue is of high political importance, very little change can happen – or adverse developments be stopped – without a concerted effort to build public will.

Philanthropic collaborations on communications in a range of policy areas exist across Europe and North America. Two funder collaborations related to migrants and refugees stand out: the Four Freedoms Fund in the US and the Migration Exchange (run by the charity Global Dialogue) in the UK. From these initiatives, four lessons emerge.

Be clear who you are talking to
The first is the need to clarify who your audience is in order to decide who is the target of philanthropic investment. Research suggests that ‘the public’ can be split into smaller groups. On the issue of migrants and refugees, three groups are common to most countries: migration supporters, accounting for around a quarter of most publics; migration rejectionists, accounting for a further quarter; and the anxious middle, which make up the remaining half, often split between those worried about jobs and services and those worried about cultural change. Unbound Philanthropy commissioned Ipsos MORI to undertake a longitudinal study in the UK during the refugee crisis in the summer of 2015: 23 per cent of people took action (donation, volunteering) and around 30 per cent said that Angela Merkel had responded better than David Cameron and Britain should accept more refugees. At the same time, 30 per cent of the public consistently rejected Britain taking any refugees. These two groups map straight on to migration supporters and rejectionists noted above. By investing widely in public opinion research, funders can make informed strategic decisions about who to target and why.

‘By investing widely in public opinion research, funders can make informed strategic decisions about who to target and why.’

Be collaborative
The second lesson is the importance of collaboration, not least because the cost of such investments is often high. In our view, collaboration among key funders and at least some of the leading charities in the field is critical. A single foundation taking this on is unlikely to succeed. 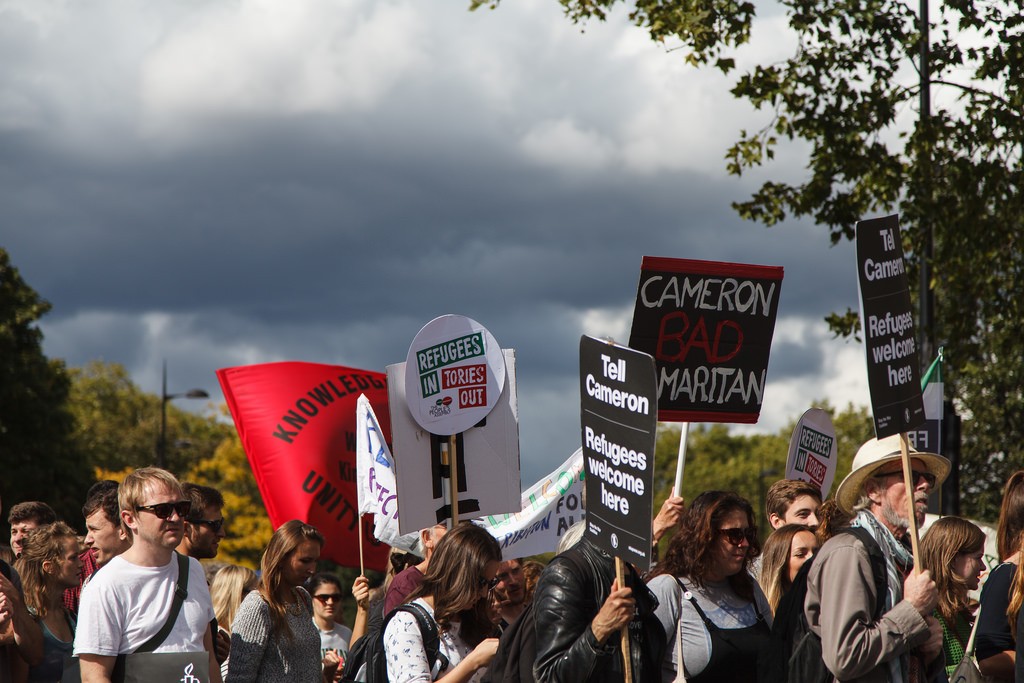 Distinguish between public debate and public opinion
Public opinion changes can take a generation or longer, far beyond the horizons of all but a handful of donors. But changing the public debate is a more realistic short-term goal and one that funders can feasibly take on. A more nuanced public debate on migration can lead to more positive long-term opinion change. A key lesson is to invest with a long-term view. Donors in the UK and elsewhere have sought to build new institutions focusing on migration and communications that would survive the exit of individual funders.

Storytellers are more persuasive than statisticians
A final important lesson is to avoid funding communication activity that has negative effects. For example, studies in the UK and the US have shown that references to the economic and fiscal benefits of migration may dissuade more people than they persuade. Emotions matter more than facts. Empirical evidence has only a specific and limited niche in communications work.

‘Harder for funders to face up to is the ineffectiveness of any type of myth busting.’

Harder for funders to face up to is the ineffectiveness of any type of myth busting. Many well-meaning efforts have sought to respond to pernicious myths with factsheets, arguments and leaflets. Not only is it ineffective but evidence has comprehensively shown that the original myth takes firmer root. Again, this does not mean that myths should not be challenged, but that this should be done in a way that acknowledges anxieties and ensures that responses are based on emotion. Simply put, in terms of shaping public will, philanthropists should support persuasive storytellers.

The refugee crisis is a long-term humanitarian emergency. Europe is likely to see substantial flows of people over the next two years at least. Public support for immediate responses (refugee resettlement for example) and for medium-term responses (such as the integration needs of refugees) is lacking and needs to be built. To do so will require a focus on effective communications, collaboration and patience.

Will Somerville is the UK director of Unbound Philanthropy. Email wsomerville@unboundphilanthropy.org

Citizen philanthropy in Canada: a race to the top