A crucial role as risk takers? 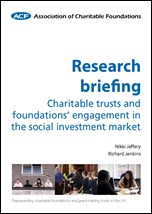 New research undertaken by the UK Association of Charitable Foundations casts a revealing light on the UK sector’s relationship to the country’s emerging social investment market. It also potentially suggests a distinctive way trusts and foundations in UK and perhaps more widely may contribute to the market.

Based on a survey of ACF’s 330 members as well as in-depth focus groups and interviews, Charitable trusts and foundations’ engagement in the social investment market found that UK foundations have to date set aside around £100 million for social investment of which £50 million has already been committed to specific deals. To give a sense of scale, in 2012 the UK social investment market, including foundation investment, was estimated to be worth just over £200 million annually, of which 90 per cent was in the form of secured debt. By contrast, a typical foundation investment is an unsecured loan of £100,000 invested directly into an organization for a term of five years, with some element of repayment dependent on the success of the venture. The research found that such deals generally deliver a below-market return but in every case foundations feel they are justifiable because of the social impact they generate.

Overall there are around 30 foundations in the UK who are already active in social investment, although one market leader, the Esmée Fairbairn Foundation, is responsible for around 45 per cent of the investments made so far. In fact 90 per cent of the total foundation investment comes from just ten foundations, all of which have investments exceeding £100 million, some staff members, and no legal obligation to preserve the value of the capital. ACF calculates that in total there are only 20 such foundations in the UK. Only three have so far invested in social impact bonds; all of these have investments worth more than £50 million. Respondents also outlined a preference for collaborative working on social investments when possible. They see social investment not as a replacement for grants, or a means of recycling funding, but as an additional useful tool to achieve social impact.

The research highlighted the role UK foundations have already played over the last ten years in providing capital to test the social investment concept, alongside government, and in building some of the key market mechanisms by providing grant funding and capital to intermediaries such as CAF Venturesome and the Social Stock Exchange.

What might the implications of these findings be for the future of the social investment market? Foundation assets are small in comparison with those of institutional investors such as pension funds. In the UK the government is also a key player in sustaining many social enterprises, through public service delivery contracts and payments for social impact bonds.

What emerges is a picture of trusts and foundations providing risk capital for social purpose organizations at key stages in their development when commercial or even public sector investors may be unwilling or unable to lend, such as when they are starting up, rapidly scaling their activity or testing new or innovative solutions.

While by their nature these sorts of investment are risky, they also require investors to understand the likelihood of the social intervention being delivered. Foundations who took part in the survey stressed that, unlike commercial investors, they have in-depth knowledge about achieving social impact. In addition, they can potentially utilize a mixture of grant and social finance in supporting organizations.

Could it be that foundations, without becoming investors at scale, have a crucial role to play as risk takers and early, committed backers of innovation in what will surely be a diverse funding ecology?

Richard Jenkins is policy adviser to the Association of Charitable Foundations and Keiran Goddard is head of communications. Emails rjenkins@acf.org.uk and keiran@acf.org.uk