Analysis is becoming a central trait of the Indian Philanthropy Forum (IPF) as we move into our second year. The IPF second annual conference was characterized by a more intellectual approach to development, meeting the demand from members hungry for input and discussion from some of the country’s leading experts.

Alongside this is an increased demand for reports that identify best practices in services and programmes for poverty alleviation, a demand that is currently outstripping supply. As philanthropists become more engaged, they are asking for more detailed analysis and starting to base funding decisions on a more strategic set of growth plans and milestones.

IPF, a Dasra initiative, has a number of reports due to be published in the coming months. These include Leveraging the Dividend, an analysis of the employability sector that identifies best practice models for bridging the gap between India’s vastly expanding youth population and sustainable jobs; and Owning her 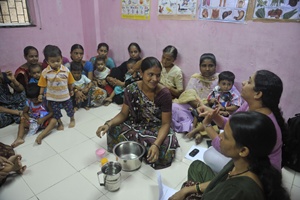 Future, a report funded by a UK foundation that looks at empowering adolescent girls in urban environments in the three states of India with the worst gender indicators: Rajasthan, Uttar Pradesh and Bihar. In the pipeline for early 2012 are reports on literacy, sanitation and impact assessment.

With the recent closing of the second giving circle, which is committing £350,000 to SNEHA (pictured), a non-profit tackling child malnutrition in urban slums, the IPF is carving out a clear niche for itself in the Indian venture philanthropy landscape and we look forward to the third annual conference in late March 2012.