As readers of Alliance will be aware (see especially the September 2015 edition), over the past several years, internationally engaged foundations have faced unprecedented challenges from governments around the world. This is just one element of the ‘closing space’ or the ‘disabling environment’ for international philanthropy. Whatever you name it, there are forces at work that are challenging the very existence of civil society.

To support Alliance’s ongoing coverage of this critical issue, we asked a range of internationally engaged foundations and public charities, most, though not all of them, based in the US and Europe, how their work is being affected and how they are addressing the challenges. These institutions are working on a wide range of issues, with especially strong concentrations on human rights and the environment. They range in size from several of the world’s largest foundations to the fairly small. Responses were also received from colleagues within  several philanthropic support organizations.

We learned early on that this is not an easy topic for foundations to discuss: some feared negative repercussions, while others felt they could only participate confidentially. For these reasons, we are keeping the identity of participating foundations anonymous.

Background: the rise of philanthropic protectionism
The seeds of government suspicion in the new millennium about the work of civil society ripened during the Bush administration’s so-called ‘War on Terror’ in the US, the Orange Revolution of 2004-5 and the Arab Spring of 2011. Authoritarian governments began clamping down on civil society organizations (CSOs), claiming that they were being used as tools of foreign control. Some governments began placing constraints on the formation, operation and international funding of CSOs and, in many instances, limited civic space. Finally, the recommendations of the Financial Action Task Force (FATF) on combatting money laundering for drug trafficking and terrorism allowed repressive regimes to close the space for civil society under the guise of good governance.

‘2015 was a record year for global restrictions on civil society and 2016 is likely to see further restrictions.’

2015 was a record year for global restrictions on civil society and 2016 is likely to see further restrictions, according to the  Ariadne Forecast.[1] The report  predicts the extension of political and legislative obstacles for civil society beyond autocratic regimes to every region of the world.

This picture is borne out by the funders we spoke with. In Latin America, respondents noted an increase in the criminalization and arrest of vocal environmental and indigenous leaders, while in China, respondents describe a crackdown including defamation, trumped-up charges and unwarranted detention of the staff of feminist and LGBTI civil society groups. One foundation noted how grantees in certain countries are being subjected to police raids and government audits after receiving funding from foreign governments. In Egypt, 300 NGO workers could be convicted and sentenced to up to life for receiving foreign funding and working without authorization.

‘In an environment where significant domestic funding for CSOs is absent, internationally engaged foundations have encountered a growing list of government-imposed constraints.’

Internationally engaged foundations find their ability to get resources to their grantees impaired as a result. As Douglas Rutzen of the International Center for Not-for-Profit Law (ICNL) notes in his March 2015 article, ‘Aid barriers and the rise of philanthropic protectionism’, impeding the flow of cross-border aid and philanthropy is a particularly insidious means to narrow the space for civil society. In an environment where significant domestic funding for CSOs is absent, internationally engaged foundations have encountered a growing list of government-imposed constraints: enacting ‘foreign agents’ legislation to stigmatize foreign-funded CSOs; capping the amount of international funding that a CSO is allowed to receive; requiring prior government approval to receive international funding; and wholesale application of counterterrorism and anti-money laundering measures. In Russia, for example, several foreign foundations closed down their operations in 2015 because they were threatened with inclusion on a so-called ‘patriotic stop list’ which would have made communication with them illegal. Israel and Kyrgyzstan have either enacted or are considering legislation similar to Russia’s foreign agents’ law. Ethiopia caps at 10 per cent the total income charities and societies can legally receive from foreign sources. Egyptian CSOs must receive authorization from the Ministry of Social Solidarity before accepting funding from foreign funders, and in Uganda, all foreign funding must be received and disbursed through the government-controlled Bank of Uganda. Azerbaijan requires CSOs to register grant agreements with the government, citing international obligations to combat money laundering.

Foundations’ due diligence processes are evolving, including by bringing in additional legal expertise to help navigate the closing space. Communications strategies are also shifting. For example, some foundations are being much more cautious about publicizing the names of their grantees. ‘This runs against our organizational value of transparency,’ said one respondent, ‘but we feel it is necessary to prioritize safety.’ More foundations are now willing to make unrestricted grants (viewed as most helpful to grantees under threat) as well as rapid-response and emergency grants, including for legal defence when a grantee is at risk of being shut down.

‘Fostering the creation of domestic funding mechanisms, particularly in places where foreign funding is restricted, is an especially important and creative approach to resilience.’

Foundations are also supporting grantees to cope with and to challenge  the closing space through a mixture of resilience and resistance. Under the new conditions, many foundations view CSO resilience as a key strategic imperative. Some foundations are encouraging grantees to assess their physical, digital and other vulnerabilities and to find ways to address them. Several respondents are supporting technical assistance programmes that help grantees raise the standard of their governance and accounting procedures, giving governments less ground to shut organizations down for alleged mismanagement. Fostering the creation of domestic funding mechanisms, particularly in places where foreign funding is restricted, is an especially important and creative approach to resilience. At least two of the foundations we interviewed are investing in the establishment of independent grantmaking organizations in Latin America, East and Southeast Asia, and the MENA region. That said, domestically focused foundations are by no means immune to closing space challenges: they too are under increased scrutiny, an issue that merits further investigation.

Resilience is key, but many foundations are being called upon by grantees to support resistance as well. Some respondents have supported locally based efforts to raise awareness of the closing space and to build coalitions of organizations wishing to engage with the government on NGO policy issues. With many traditional forms of protest now criminalized, some foundations are supporting alternative forms of dissent such as art exhibitions, public debates and film festivals, activities that can be more difficult to criminalize. As formal governmental recognition becomes increasingly difficult for CSOs, some foundations are choosing to work with more informally structured organizations. The Fund for Global Human Rights has created a dedicated programme to address this issue; grants are made to limit or stop restrictive NGO laws, for training and tools for frontline activists, and for pro-civil society advocacy in regional and international fora.

‘As Jo Andrews, former director of Ariadne, notes: “More than any other issue I have come across in my time in philanthropy, this is one where funders need to act together. Closing space is not an issue that can be solved by one funder acting in isolation.”‘

Towards collective action
Most of these responses are at the individual institutional level but as Jo Andrews, former director of Ariadne, notes: ‘More than any other issue I have come across in my time in philanthropy, this is one where funders need to act together. Closing space is not an issue that can be solved by one funder acting in isolation.’ A look out at the bigger picture – how foundations are working collectively to address the closing space and at macro forces from outside of philanthropy – reveals several important opportunities for our sector to combat this tendency.

Over the past few years, foundations have begun collectively organizing to confront the closing space challenge. Three organizations are leading this effort: Ariadne, the European Foundation Centre (EFC), and the International Human Rights Funders Group (IHRFG). Together, they created the Donor Working Group on Cross Border Philanthropy. Last year in Berlin, the Working Group convened donors, civil society advocates and government representatives to discuss means to resist the further disabling of civil society. The Working Group has produced several publications exploring the trend, and established two online communities to allow foundations and civil society organizations to share information and ideas. Looking ahead, the Working Group is establishing the Funders Initiative for Civil Society, which will seek to develop a strategic response to the closing space trend, help CSOs locate funds to contest it, and create better channels of communication with state actors and other international institutions.

As noted, the intergovernmental Financial Action Task Force (FATF) guidance has contributed to closing the civil society space. The Global NPO Coalition on FATF has been successful in pressuring this body into revising its guidance and recommendations. Several foundations have supported  this work but the coalition would benefit from increased philanthropic engagement.

Looking further afield, it will be important for civil society and philanthropy to better partner with multilateral organizations working in the global development space. Recently, an extremely important ally has been the United Nations Special Rapporteur on the Rights to Freedom of Peaceful Assembly and Association, Maina Kiai, who has championed access to funding and other resources as integral to the right to freedom of association.

‘In the years ahead, a potentially valuable opportunity for keeping the civil society space open may be the Sustainable Development Goals (SDGs).’

In the years ahead, a potentially valuable opportunity for keeping the civil society space open may be the Sustainable Development Goals (SDGs). Countries around the world have made commitments on a range of issues, and it is difficult imagine their meeting those commitments without the robust engagement of civil society. This applies particularly to SDG 16, which is considered a lynchpin of the entire enterprise, and includes the promotion of peaceful and inclusive societies for sustainable development and access to justice for all. Foundations should consider formally aligning their relevant grantmaking with the SDGs. In so doing, internationally engaged foundations may enjoy greater legitimacy in funding CSOs around the world.

As one respondent noted, ‘civil society is inherently creative. It has to be in order to get results.’ The challenge for internationally engaged philanthropy is to work closely with civil society on a common challenge, to withstand the attack and to  reverse the closure of the space in which it operates.

Berta Caceres’ death highlights threats faced by activists
Sadly, forces wishing to shut down civil society have more than just regulatory tools to do so, as the environmental and indigenous rights movements witnessed most recently in Honduras. Long-time activist Berta Caceres, after receiving death threats for many years, was tragically gunned down in her home in March. 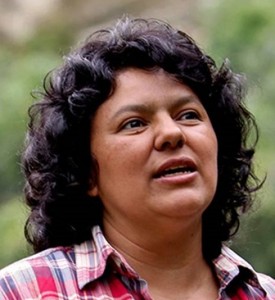 According to Global Witness, Honduras is the most dangerous place in the world to be an environmental activist, with the highest per capita rate of killings of environmentalists. Foundations whose work lifts up human rights and other activists must pay special attention to this challenge. While increased publicity can help protect activists, it is by no means a bulletproof vest. As one respondent noted: ‘Berta’s assassination was a wake-up call; we must do more than simply protect people. Instead of restricting activism, laws must be enacted that reveal corrupt relationships and hold parties accountable, so that such crimes cannot occur with impunity.’

Coverage of the 27th EFC Conference: Imagining and investing in our future