Communication is the strategy

Participatory grantmaking: it can be done – here’s how

How can philanthropists and foundations meaningfully and effectively coordinate COVID-19 response?

Unrestricted funding has been more talked about than practised by foundations. A new professorship in the Netherlands aims to get to the bottom of what its benefits – and its drawbacks – really are

Recent developments in Europe and the US show a trend for large foundations to move towards models of more ‘trust-based’, unrestricted, or flexible funding practices. For example, in 2019 five large US foundation leaders pledged to implement more unrestricted grantmaking practices ‘to address chronic underfunding of non-profits’ indirect costs’. The current Covid-19 crisis has led over 600 US foundations to sign a pledge promising to ease or eliminate restrictions on existing grants, and make new grants as unrestricted as possible. A similar statement was released and signed by foundations and umbrella organisations across Europe, calling for more flexible grantmaking.

Despite these developments, the majority of funders appear to be operating in a paradigm where the default is to provide restricted project funding. Based on data from the Foundation Center, it is estimated that, in 2005, 26 per cent of the grants provided in the US were in the form of unrestricted general operating support (GOS).

Another study of a sample of US organisations surveyed by the Center for Effective Philanthropy between 2010 and 2020 estimates that, on average, 21 per cent of foundations provided funding in the form of GOS, and only 12 per cent provided multi-year GOS. There appear to be no comparable data for Europe, but it seems that restricted, project-based funding is the dominant funding model there, too.

Scholars studying philanthropy need to involve all relevant stakeholders throughout the research process, in order to study what matters, in a way that matters, with the involvement of everyone who matters. 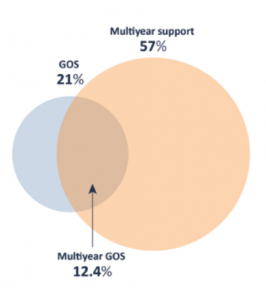 Interestingly, there is evidence that the discussion over the provision of project funding or unrestricted funding is at least a century old. In 1991, philanthropy consultant Michael Seltzer and Carnegie Corporation’s Michael Cunningham mention that Jerome Greene, secretary of the US Rockefeller Foundation, wrote as early as 1913 about the foundation’s responsibility to support institutions with continued and unrestricted support. Seltzer and Cunningham added that:

‘Over the past 77 years, debate has continued between those who believe that a funder’s role should center on particular projects, and those who maintain that the most effective nonprofit work is done when the money is offered over a longer period with no strings attached. The needs of nonprofit institutions are often practical, requiring unrestricted dollars to cover such pedestrian expenses as rent and utilities. Funders, however – be they foundations or corporations – may well prefer to earmark their limited funds for accomplishing a specific set of social objectives[1].’

Benefits for grantees
The grey literature – reports from consultants and foundations, and evaluation studies – unequivocally suggests that unrestricted funding has substantial benefits for grantees. Wallace and Saxton argue that ‘unrestricted funding gives grantees flexibility and freedom, especially to invest in “less glamorous” work’ while, in the US, research by the Center for Effective Philanthropy shows that foundation CEOs and non-profit leaders agree that GOS is the most effective form of support for grantee organisations. 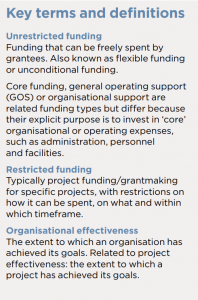 In a recent series of reports launched near the end of 2020, the Center for Effective Philanthropy shares the results of a survey study among 168 foundation CEOs, 105 programme officers and 212 grantees – including non-profit CEOs and executive directors – asking them about their experiences with multiyear GOS. Their key findings are that there is ‘a sobering disconnect between attitudes of foundation leaders and the experience of nonprofits’ and ‘a similar disconnect between the attitudes of foundation CEOs themselves and their foundations’ practices’. Non-profit leaders surveyed report that their organisations would benefit substantially from receiving multiyear GOS, especially in terms of project impact, organisational effectiveness and financial health. While foundation leaders stress the importance of multiyear GOS, they do not shift their funding practices in that direction. The authors further note that the results did not clearly show why foundation leaders’ attitudes and practices in relation to multiyear GOS were so disconnected. The study suggests that those foundations that do provide multiyear GOS do so because they ‘have made an intentional choice born of their belief that this will build trust, strengthen relationships and increase impact’.

The effects of GOS on overall outcomes of grantees seem to depend on other factors like the size and duration of the grant. There is also some evidence that especially smaller and newer grantee organisations benefit more from unrestricted funding.

In a reflection on this report, Marcus Walton, president and CEO of Grantmakers for Effective Organizations, said: ‘Leaders at foundations that provide more multiyear GOS than typical share a common set of values for their work. They prioritise funder and grantee impact, seek to strengthen grantee organisations, and aim to build trusting relationships with grantees.’

He goes on: ‘The disconnect between foundation leaders’ attitudes and practices does not appear to be due to foundations encountering significant barriers to providing multiyear GOS. Among the foundations in this study that do not provide multiyear GOS, the majority report not even having considered it.’

Some of the grey literature also hints that there may be moderating factors: unrestricted funding may work better under some conditions than others. From the 2006 report by the Center for Effective Philanthropy, we learn for example that the effects of GOS on overall outcomes of grantees seem to depend on other factors like the size and duration of the grant. There is also some evidence that especially smaller and newer grantee organisations benefit more from unrestricted funding.

Future research
Interestingly, the effects of unrestricted funding on the work of grantee organisations appear to have largely been overlooked in the academic literature. In the inaugural lecture in March, with which I formally accepted my professorship ‘The Societal Significance of Charity Lotteries’ at the Center for Philanthropic Studies at the Vrije Universiteit Amsterdam, I outlined why I think part of the explanation for this oversight lies with academia, and the processes involved, especially in relation to building an academic career. Academic researchers face counterproductive incentives, including a ‘publication pressure machine’ which leads scholars to study what can be easily studied, and easily published. I argue that scholars studying philanthropy need to step away from these incentives, and involve all relevant stakeholders throughout the research process, in order to study what matters, in a way that matters, with the involvement of everyone who matters. Through engagement with a large range of stakeholders, we identified the following question as leading for our research under this professorship at the Vrije Universiteit: 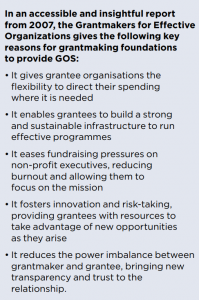 What are the effects of restrictions on funding on the effectiveness of grantee organisations?

With my team, which includes Dr Arjen de Wit and several MA sociology students, we aim to contribute to a strong and nuanced evidence base for the effects of grantmaking, and especially unrestricted and flexible grantmaking. Our aim is definitely not just to show the positive effects of unrestricted grantmaking. We intend to demonstrate all its effects, including the unintended consequences that might actually limit grantees in their work. And we intend to move beyond studying the perception of grantees on the effectiveness of flexible funding, which has been the predominant source of support for the positive effects of unrestricted funding. In our research, we want to show the longitudinal effects of restrictions on funding for grantee effectiveness, from the perspective of different stakeholders. To do this, during the next steps of our research we will study the different effects funding restrictions have in different contexts and for different types of organisation.

The study suggests that those foundations that do provide multiyear GOS do so because they ‘have made an intentional choice born of their belief that this will build trust, strengthen relationships and increase impact’.

In order to facilitate the co-production of research, sharing knowledge – gathered by us but also the excellent grey literature – and increasing collaboration between stakeholders, we have launched the Center for Grantmaking Research. This new centre is housed at the Center for Philanthropic Studies at the Vrije Universiteit Amsterdam, and initially funded through a grant from the Dutch Charity Lotteries to establish the professorship mentioned above.

Thank you for the article. More evidence in this area would be very welcome. In terms of framing the debate, a key article for me was Michael Shuman's 1998 piece Why do Progressive Foundations Give too Little to too Many? which can be found here https://www.tni.org/es/node/7388 My own musings on this topic are here: https://medium.com/a-funding-utopia/funding-freedom-what-if-all-grants-were-unrestricted-d7959e6476b2

A new era of corporate impact