On 25-28 April, Fondation de France and the University of Geneva, Centre for Philanthropy, hosted a three-day seminar, titled ‘a journey towards the European philanthropy of tomorrow’. When foundations that jointly allocate well over one billion euros a year to the greater good come together, it is worth looking at the main conclusions. 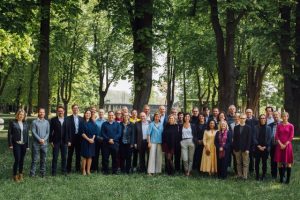 A little over two months into the new reality of a major war on European soil, and with the recent Covid-19 pandemic experience under everyone’s belt, this first European Academy of Strategic Philanthropy took place at a peculiar point in time. By end of 2021, according to the latest modelling, some 18 million people had likely died because of the pandemic[1]. In addition to the human tragedy, after just eight weeks of combat, between €500 billion and €1 trillion of capital stock has been destroyed in Ukraine[2].

Thus prompted by the nastier sides of reality, the 43 speakers and participants representing major European foundations and academia gathered at Royaumont, a former Cistercian abbey north of Paris. Unusual for such gatherings, the voices were overwhelmingly European.

Geography proved an aide to the group’s reflections. A two-meter-high wall surrounds the abbey. For the abbey’s builders in the Middle Ages, the wall conceptually extended until heaven – and was insurmountable, thus preventing the monks from leaving the abbey, and ensuring their continuous and undivided attention to prayer and spiritual matters (plus some winemaking). The sheer density and quality of the programming at the Academy fulfilled a similar objective.

It is not enough to do good work. In times of social division and the proliferation of fake news, one also needs to keep improving practice, and get the messages of humanism and hope across.

In times of rapid change and mutual causation, where philanthropy is both affected by and driving the transformation of society, all potential drivers of progress in philanthropy that one does not usually have the detachment to discuss were on the menu. The cultural-historical grounding of philanthropy, today’s socioeconomic and political context, the how-to of applying strategy to philanthropy, philanthropy’s legitimacy as a contributor to the public good, the Sustainable Development Goals as a viable yardstick for convergent action, limitations of current grant-making practices, operationalising the ambition of systems change, philanthropy’s intertemporal dimension, enlisting advances in machine learning, the prospects of conscious disruption of practice as a driver of progress, as well as new forms of collaboration – all were considered in what turned out a veritable tour de force.

Thirty-four hours of deliberation and discussion boiled down to a fundamental consensus: while much of it may still be clouded by the fog of war, we are entering a new era that is different from the pre-war era: philanthropy has much to contribute, but also needs to rethink its voice, some of its operating principles, and converge on best practice.

A useful concept on how to prioritise work is ‘philanthropic vitality’, or what makes the sector efficient, impact-focused, and trustworthy[3]. This includes adequate financial capital, a robust regulatory context and accountability practices, talent and human capital development, and high levels of public trust. Good collaboration practices, as well as a well-developed network of intermediaries able to connect funders with non-profits and offering professional services, also enhance vitality.

Philanthropic work is taking place against its stakeholders’ growing scrutiny of the sector, and this needs to be factored in. To stimulate the discussion, in one of the sessions, philanthropy was ‘put on trial’ – a more extreme version of an Oxford-style debate asking whether philanthropy actually adds enough social value to warrant a license to operate going forward. Empirical evidence militating in favour of its contribution to the public good and many accomplishments was easily located. One can hardly expect a group of foundation professionals to propose doing away with their institutions and jobs. However, one important lesson was that it is not enough to do good work. In times of social division and the proliferation of fake news, one also needs to keep improving practice, and get the messages of humanism and hope across. In the eyes of the public, philanthropic foundations are the most trusted institutions around in some countries, ahead of government, media, and business[4]. To be able to further increase its contribution to the greater good in our trying times, it is high time that philanthropy devise a voice to act on that trust. With hindsight, the European Academy of Strategic Philanthropy may have been a building block in this process.

Maximilian Martin serves as the secretary general of the Fondation Lombard Odier, a trustee of the Fondation Philanthropia, and the Womanity Foundation. He is also the founder of Impact Economy, a Senior Fellow at IMD’s elea Center and a visiting lecturer at the University of St. Gallen.

The opinions expressed in this article are those of the author and do not necessarily reflect the views of the organizations whom he serves in an executive or board of directors’ capacity.