Reflections on grassroots grantmaking in China

Yu Yin, the coordinator of Global Greengrants Fund’s small grants program in China, recently joined me in New York City for a series of meetings with donors on the role of grassroots grantmaking in fueling environmental and social justice movements, especially in regions where space for civil society is shrinking.

Our grantmaking program in China was established in 2000. Since that time, Global Greengrants’ advisors have channeled more than 500 small grants to grassroots leaders all over the country. Our funding has helped communities address a wide range of challenges related to biodiversity, waters and rivers, pollution, environmental health, coastal protection, and climate change.

While in New York, we heard stories from donors who traveled to China in the 1980s and discussed how rapid development has changed the country’s environment and economy, as well as local livelihoods.

We walked along the High Line, an elevated public park converted from an out-of-use railroad trestle, and discussed air pollution—a primary reason why Yu Yin relocated from Beijing to Kunming, the capital of Yunnan Province located in southern China. She noted that many residents of China’s largest cities contend with health impacts from chronic pharyngitis, or black lung disease, caused by constantly breathing in hazardous particles which deposit residue in their lungs.

Between meetings, we sought out restaurants that serve local and organic food. We discussed how small grants are effective in supporting groups like the Beijing Farmers’ Market, which promotes sustainable agriculture. It is developing a Participatory Guarantee System, which involves farmers, consumers, NGOs, and the government to certify small organic farmers; a third-party certification, such as the USDA organic label in the United States, does not yet exist in China. 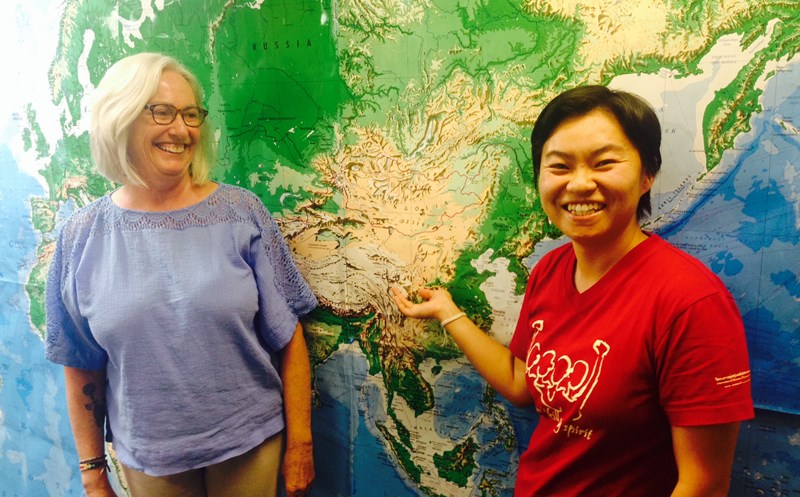 Yu Yin also shared how the convenience of ready-made packaged food is changing the culture and environmental landscape in many of China’s rural ethnic minority regions.

For example, the ecosystems in northwestern China are under threat from increased waste as communities transition away from traditional practices and consume more packaged food. In the absence of governmental services to manage waste, our advisors have channeled grant funds to grassroots groups that are implementing recycling programs, working with nomads to understand the impacts that waste and pollution has on animal husbandry, and implementing garbage cleanups and environmental education in tourist hotspots such as the fragile grasslands.

After a week of meetings, walking, and eating with Yu Yin, it is abundantly clear that she has a strong commitment and passion for grassroots action.

I asked what she likes best about her role as a grantmaker in China. Yu Yin reflected on the country’s increasing environmental challenges and replied:

“When Global Greengrants’ grantees feel that they can’t do their work, we listen to them, and assist and support them to find the solutions by themselves. The flexibility of our funding and the mentorship our advisors provide helps grassroots groups carry out the crucial work of China’s environmental movement.”

Yu Yin succinctly captures why nimble grantmaking that channels small amounts of funding to grassroots leaders is so effective in countries like China—where the environmental movement is still relatively young but the challenges are numerous. Many communities in China face daily injustices that include living in toxically contaminated areas, unsafe levels of air pollution, the destruction of finite natural resources, and rivers that run green, red, and denim blue. Meanwhile, China’s energy needs have led to a rapid acceleration of hydropower stations, nuclear power plants, mining, and the import of oil and natural gas—posing more threats to environmental and public health.

Within this context of pressing environmental degradation and public health harms, there is a growing engagement of grassroots groups that are propelling the environmental movement and fostering the development of civil society. However, many of these groups lack funds to pay staff salaries and rely on volunteer support, do not have permanent office space, and do not have resources for professional development. Many grassroots activists are closely scrutinized by the government. Some groups face obstacles that prevent them from registering as nongovernmental organizations.

China is a key battleground for environmental protection. Global Greengrants has seen that small amounts of philanthropic funds are critical to fueling grassroots action. A new draft law proposed by the Chinese government may regulate and shift how international funders support Chinese organizations, but the innovation of grassroots leaders to solve complex environmental problems in their communities is a force that can’t be stopped. Global Greengrants is proud to be among the funders that continue to support community-led actions that have tangible impact across China.