How will big liberal philanthropy react to the 6 January attack on the U.S. Capitol? The following day Ryan Schlegel of the National Committee for Responsive Philanthropy tweeted, ‘My money is on ‘stunned silence’ then back to the usual webinars about the value of active listening and press releases about equity task forces.’

I was asked how I thought big liberal philanthropy should respond, based on my 30 years of work in philanthropy and grassroots organisations to counter the rise of white nationalism.

The question isn’t what to say to philanthropy in this moment. The question is: when will they finally listen? Any organisation that purports to be shocked by the deadly storming of the U.S. Capitol and attempted overthrow of a free and fair election is shockingly out of touch.

Big liberal foundations can’t say they weren’t made aware of the threat. They may not have believed it; they may not have known what to do with it – but many of us have been sounding the alarm for more than a decade now.

should i start taking bets on how big liberal philanthropy is going to react to yesterday?

i think for now my money is on "stunned silence" until about Monday then back to the usual webinars about the value of active listening and press releases about equity task forces.

It was 2010 when I co-authored an in-depth white paper for one of the biggest liberal foundations. ‘Storm Warning: Hate Violence and the Challenge to an Open Society,’ detailed ‘how bias crimes, hate group activity, and structural repression will undercut the U.S. movement for an open society.’ I’m confident that mine was not the first or last for this foundation and others.

Nine years later, after the massacres in Christchurch and Poway when Trump was doubling down on defending the deadly white nationalist rampage in Charlottesville, Sharon Alpert, then CEO of Nathan Cummings Foundation, published How Philanthropy Can Curb the Rise of Hate: Count It, Condemn it, Confront It in April 2019 in the Chronicle of Philanthropy. In it, she stated as plainly as possible:

‘All of us in leadership roles, whether we’re president of a country or an organisation, must tell the truth about what is really happening in America and around the world and commit to standing with those brave enough to confront it….That’s why it’s important that all of us in philanthropy call out white nationalism for what it is — a terror movement grounded in centuries of white supremacy….We must denounce policies that encourage or coddle white nationalists.’

Sharon laid out 5 Steps for Foundations to Take, steps that are as relevant today as they are disastrously overdue. Eight months later her employer announced Sharon’s departure from philanthropy.

I made that same transition when the electoral college placed Donald Trump in the White House. I left a job in philanthropy and a salary I never could have imagined walking away from as a working-poor Black kid in Long Beach, to return to the long hours and low pay and high risks of direct organising.

When I didn’t see philanthropy embracing the challenge of an ascendant white nationalist movement, I worked with my colleagues at Western States Center to pilot a replicable response. I offer this model now as a template for the actions big liberal philanthropy should take.

The question isn’t what to say to philanthropy in this moment. The question is: when will they finally listen? Any organisation that purports to be shocked by the deadly storming of the U.S. Capitol and attempted overthrow of a free and fair election is shockingly out of touch.

The events of 6 January at the U.S. Capitol reveal twin problems: white supremacy as a system and white nationalism as a movement. The two are linked but require distinct solutions. White supremacy is a system of oppression based on privileging whiteness that operates at both an individual and a structural level. White nationalism is a movement driven by a narrative of anti-Semitic conspiracy theories, racial superiority, and fear of demographic change. Its policy goals are to criminalise immigrants, Muslims, and people of color in order to create a white ethno-state.

We will not achieve our promise as a nation, of a thriving and inclusive democracy that affords everyone the opportunity to succeed, unless we remediate the damage done by the system of white supremacy and contain the threat of the white nationalist movement. Doing so requires investment and action on four fronts:

These four pillars should be used to lift up more serious investments from philanthropy in this moment. Also needed are more serious commitments to effective grantmaking and internal change, to using your clout and holding philanthropy to account.

The orthodoxy of current grantmaking is not working. It’s bottlenecked in places that don’t reach the base of potential support for rebuilding inclusive democratic practice. Researching the far right isn’t the same as putting boots on the ground to help communities organise against it. We need more heterodoxy: investments in organisations like Western States Center that punch way above our weight class. This includes: 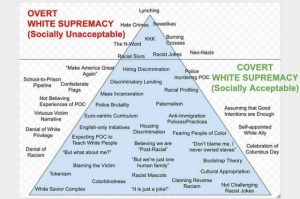 Graphic by Safehouse Progressive Alliance for Nonviolence (2005) and adapted by Ellen Tuzzolo (2016).

As within, so without: the problems now so inescapable in our nation’s streets and capitol buildings are reflected internally in the composition and practices of our leading institutions, philanthropy included. In addition to the now-standard DEI trainings:

As the events of 6 January demonstrate, neutrality is no longer an option. Philanthropy needs to step up as a leading member of civil society to protect and rebuild democratice practice. Some starter ideas for using your power and voice to counter white supremacy and white nationalism:

According to the Hate is Not Charitable Campaign, donor advised funds managed by Donors Trust, Fidelity Charitable Gift Fund, Schwab Charitable Fund, and Vanguard Charitable enabled anonymous donors to contribute nearly $11 million to 34 organisations that the Southern Poverty Law Center considers to be hate groups between 2014 and 2017.

Many foundations have stepped up. Too many have not.

Twenty-one years ago, I took the board and staff of the Unitarian Universalist Veatch Program at Shelter Rock on a site visit to the Aryan Nations compound in Northern Idaho. In my 30 years of anti-hate organising, they are the only funders ever to go into the field with me.

I have long been astounded by how many funders set their priorities without any direct experiential knowledge of the core threats to American stability and prosperity. Perhaps this is one positive outcome of the events of 6 January: When it comes to white nationalism, every funder now has experiential knowledge of what those of us on the front lines have been warning of for the last decade.

Eric Ward is the director of the Western States Center, a long-time right-wing extremism counter-organiser, and the chair of The Proteus Fund’s board.