So much to gain, all to lose

‘Will we be able to look our children and grandchildren in the eye and tell them that we did everything we could, when just 2 per cent of philanthropic giving is directed towards mitigating climate change?’

This stark question is posed in the conclusion of a hard-hitting European Foundation Centre (EFC) report on environmental funding published shortly before we went to print. 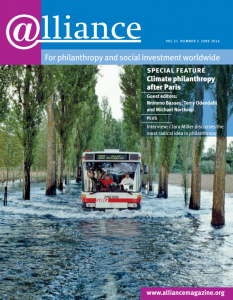 The urgency of this question reverberates across our latest issue – the fourth one we’ve devoted to climate change and sustainability in our 25-year history.

Many of the themes remain depressingly similar to coverage exactly five years ago in the aftermath of the Paris COP: an inexcusable lack of funding to address climate change head on, a concern that communities at the sharp end of climate change are bearing the brunt of its impacts and fears that foundations are accelerating the climate crisis by continuing to invest their endowments in fossil fuels.

Yet despite this, there are signs that we are on the eve of change as we approach the critical United Nations Climate Change Conference (COP26) in November. 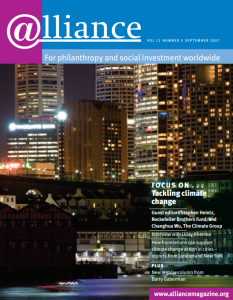 In our own field, funders are signing new commitments to act, leading climate philanthropists such as the Oak Foundation’s vice-chair, Kristian Parker and CIFF founder, Christopher Hohn are contributing significant resources, galvanising peers through bodies such as the Climate Leadership Initiative, Active Philanthropy, ClimateWorks Foundation and the European Climate Foundation, and exerting influence at the highest levels of government. Philanthropy is ‘incredibly influential’ according to the UK’s High-Level Climate Action Champion, Nigel Topping, interviewed in this issue.

But the key challenge now is for every sector, including philanthropy, to translate positive aspirations, commitments and targets into significant enough change to stop our planet over-heating. 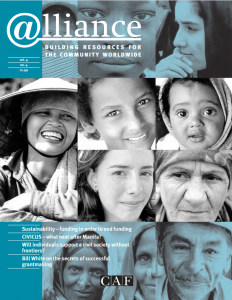 Will more foundations increase funding to work which directly challenges the status quo? Are we willing to back causes reinventing the way we live and work? Too few foundations are currently pursuing more disruptive solutions. ‘It feels as though the social movements that are opening up political space are running well ahead of philanthropic foundations,’ according to the EFC report. Bridging this gap may be a necessary condition for foundations to play the most impactful role in tackling the climate emergency.

We at Alliance will provide weekly coverage of developments over this vital decade – all part of our ClimatePhilanthropy 2030 commitment. And this issue guest edited by Felicitas von Peter and Winnie Asiti is a further part of that effort. As Felictas and Winnie note, ‘we are not the first generation to have realised what’s at stake, but the last one to be able to provide a tomorrow that is resilient, just and peaceful. We have much to lose, but a lot more to gain.’