The European Foundation Centre has launched the 5th edition of its environmental funding mapping, representing the most comprehensive study to date into support for environmental initiatives provided by European philanthropic foundations. The report shows that while environmental giving has increased since the last report in 2016, funders largely don’t seem to be interested in trying to disrupt the status quo. 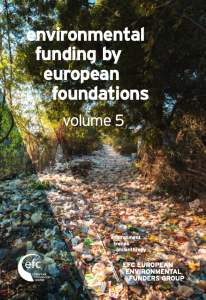 The mapping builds on the work of the four previous editions, significantly increasing the number of foundations and grants being analysed, along with the total value of these grants. The research seeks to establish as detailed a picture as possible of the state of European foundation funding for environmental issues. This edition of the mapping covers 127 foundations and 5,358 environmental grants across 146 countries, totalling €745.6 million in funding in 2018.

This new edition shows a continuation of several trends found in the 4th edition: Many of the same thematic issues continue to receive the largest share of funding; there is still a severe lack of EU-wide grantmaking activity, a stark contrast to the 80 per cent of environmental legislation framed at the EU level; and similarly large disparities were identified in grantmaking activity across the various regions of Europe. Furthermore, the data illustrates a welcome rise in the total value of environmental grants of 15 per cent among the 77 organisations featured in the 4th and 5th editions of the mapping.

‘The new report shows welcome growth in environmental giving by European foundations, with 5,358 environmental grants worth €745.6 million,’ said report author Jon Cracknell. ‘The research suggests, however, that just 22 out of the 127 foundations covered by the report are really trying to disrupt and transform the status quo, despite the fact that we have less than 10 years remaining to tackle climate change and biodiversity loss.’

The five editions of this mapping are intended to build understanding of the philanthropic sector, improve coordination, and provide analysis that informs discussion of effectiveness in environmental grantmaking.