The sharing economy can build new forms of solidarity

When I began writing about the sharing economy in 2009, the eclectic array of struggling, communitarian-minded tech start-ups in San Francisco was just one small part of a vast number of sharing innovations that made up what we at Shareable saw as an era-defining transformation in how people create value. This included open source software, all the open X movements inspired by open source, Creative Commons, the resurgence of an economy based on solidarity, the rise of carsharing, bikesharing, co-working, co-housing, open government, participatory budgeting, crowdsourcing, crowdfunding, hackerspaces and more. We were in the midst of a sharing transformation.

Soon, however, money began to pour into a handful of these tech start-ups, most notably Airbnb, Lyft and Uber. The media quickly shifted its attention to them and they became synonymous with the sharing economy. However, as the money rolled in, the communitarian element rolled out. Exploiting peer providers, purposely breaking regulations, strong-arming local governments, and unethical competitive tactics became the norm.

The very thing that earned these start-ups traction in the first place – how they recast relationships between strangers in radically constructive terms – was sacrificed to growth. Instead, they became a particularly aggressive extension of business as usual.

Despite this, the real sharing economy did not disappear. We at Shareable helped catalyse two related movements to help draw resources to this real sharing economy. In 2011, we hosted Share San Francisco, the first event framing cities as platforms for sharing. 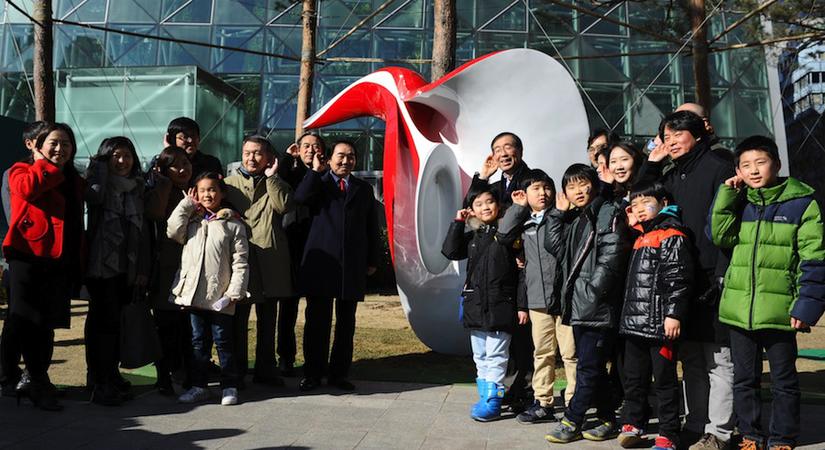 Mayor Park (directly in front of the sculpture) and Seoul citizens hear the call for a sharing city.

The city of San Francisco incorporated our thinking into its Sharing Economy Working Group, which then inspired a former social justice activist and human rights lawyer, Mayor Park Won-soon of Seoul, South Korea, to launch Sharing Cities Seoul in 2012.

Sharing City Seoul’s comprehensive package of regulations and programmes supported a localized version of the sharing economy where the commons, government and market work together to promote sharing and the common good.

Many cities have followed suit, including Amsterdam, London, Milan, Lisbon, Warsaw, five cities in Japan, and at least six other cities in South Korea. Last year, Mayor Park won the Gothenburg Award for Sustainable Development for his sharing cities work.

In late 2014, we published a Nathan Schneider feature story entitled ‘Owning is the New Sharing’, which reported on an emerging trend – tech start-ups organizing themselves as cooperatives. This, together with a conference about platform cooperatives, proved the stimulus for a new movement.

One of the cornerstone examples of this movement is Stocksy, a growing online stock photo marketplace where the photographers own and control the business.

In other words, Stocksy is a 21st century worker cooperative. Another example is Fairmondo, a German eBay for ethical products owned and controlled by sellers. It’s expanding by recruiting cooperatives in other countries to a federation of cooperatives that together will maintain local control of each country’s market through a single technology platform.

Fairmondo exemplifies an approach to impact that philanthropists ignore because, too often, they are as obsessed with scale as any Silicon Valley venture capitalist and don’t see the virtue of impact through replication instead.

In this regard, philanthropists today should follow the instructive example of Edward Filene. Filene played a leading role in developing an institution that allowed ordinary people to build their own wealth – credit unions – a high-impact model that could be replicated, and it has been.

Philanthropists should use their resources to help do the same across a whole range of new institutions including sharing cities, platform cooperatives, and much more.