The future of foundations is female

Even if the steps that German foundations are taking towards gender equity are cautious, they are carrying the sector in the right direction

Inspired by the work of international foundations, in 2017 the Association of German Foundations (BDS) launched an additional group, Gender and Diversity. This was to supplement its existing thematic network, Women and Foundations, and begin the strategic integration of gender justice in the German foundation sector. The group is growing and has attracted partners such as the new initiative Fair Share of Women Leaders, Open Society Foundations, PHINEO and Wider Sense.

At the group’s first meeting, one consultant said: ‘The future of foundations is female.’ In some respects, so is the present. Women make up at least 70 per cent of the civil society workforce. More women set up or co-found foundations than they did 15 years ago. In some respects… but not in all, as we will see below.

Foundations can consider gender equity in all their support and project activities… but in practice, this so-called ‘gender mainstreaming’ rarely takes place.

A strong signal of BDS’s intention to secure gender equity came at its 2018 annual conference when the philanthropist Ise Bosch received Germany’s most important founder’s award. This was given for her commitment to human rights globally, her work in improving the living conditions of girls and women and in protecting sexual minorities. When the awardee, with more than 30 international grantees of all binary and non-binary sexes, rocked the floor , a very special atmosphere could be felt in the hall. At the same time, though, a blog post in Alliance by Anke Pätsch noted that only three out of the top 35 German foundations were led by women.

Filling the data gap
With statistics on questions of gender within foundations few and far between, in March this year, PHINEO and BDS conducted a survey of 183 German foundations, supplemented by five qualitative interviews with foundation representatives. The findings confirm that gender equity is still in its infancy in the German foundation sector.

Eighteen per cent of foundations surveyed have been involved in projects in the field of gender justice. These primarily involve projects to counter violence against women, to fight discrimination and to question gender stereotypes. Approaches to reflecting on masculinity are very rare.

Foundations can consider gender equity in all their support and project activities, even if this is not the main thrust of their work. But in practice, this so-called ‘gender mainstreaming’ rarely takes place. Fifty-seven per cent of grantmaking foundations said they have not yet considered gender mainstreaming and do not consider it necessary in the future. Only 24 per cent of operating foundations take this view.

Foundations working in the area of women/girls and gender justice are more equal internally than foundations with other priorities.

Women are still under-represented in the highest governance bodies of foundations (board of directors or comparable). In 72 per cent of the foundations surveyed, women were in the minority on the board and, in 29 per cent of cases, the boards did not have a single woman member. 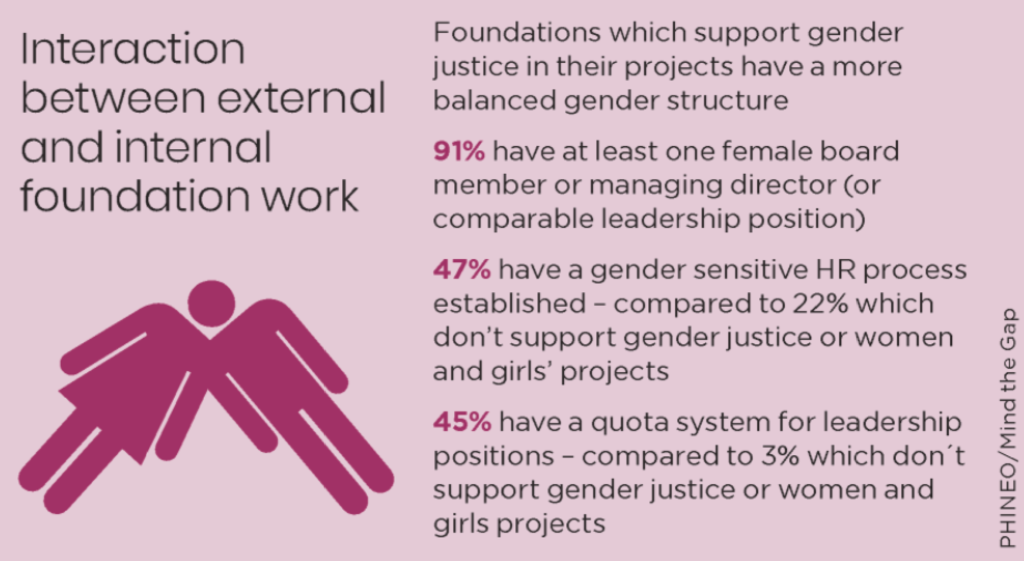 There is a correlation between the work of a foundation and its internal gender structure: foundations working in the area of women/girls and gender justice are more equal internally than foundations with other priorities. Ninety-one per cent of them have at least one woman on the board of directors and use instruments and measures for a balanced gender relationship much more frequently.

A change is on the horizon
More positively, 46 per cent of foundations in the survey would like to develop the subject of gender equity further. Representatives from foundations and the third sector have strong arguments:

At the 2019 BDS conference in Mannheim, all panels organised by the association itself for the first time had almost equal numbers of women (44 per cent) and men. The number of women on the committees of the association has increased significantly as a result of new appointments.

The topic of gender justice… is a process that develops an organisation, opens your eyes to your own unconscious bias and opens doors, too, when you knock loudly enough.

Probably the most important step so far is the redrawing of the principles for good foundation practice. Approved by 4,500 members in June this year, these include a new resolution recommending that foundations ‘strive to implement gender equity in their work and to realise the opportunities offered by diversity’. In a sense, this looks like two steps forward and one step back, a cautious formulation of a still conservative sector. A member amendment proposing that foundations ‘implement gender equity and strengthen diversity’ was rejected. Nevertheless, general secretary Felix Oldenburg announced that the association is committed to ‘invest the necessary additional resources in order to make gender equity a lived reality among all our members’. A task force in early September developed concrete measures to be implemented in the near future, including a strong visible representation of women in the sector, a practical gender equality toolbox with case studies, checklists and guidelines, in-depth data analysis and a means of ensuring female presence in events and publications.

We want to inspire foundations to take up the topic of gender justice. The process is ongoing in our own offices. It’s a process that develops an organisation, opens your eyes to your own unconscious bias and opens doors, too, when you knock loudly enough. We hope that all foundations will look beyond their current horizons, question their own attitudes and actions and… draw the right conclusions. For all women! For all men! For all gender!

Thank you for this informative analysis. Gender Justice makes us conscious of decision about women in leadership. There is a lot about women and management that starts from the home,their eye for detail, their level of committment which is sometimes with elements of emotions.Of course the synergy of women and men at leadership level is very important at achieving results.