What does love for humankind, justice and collaboration in philanthropy have in common?

PEX Forum 2021 – Philanthropy is stepping out, but into what? 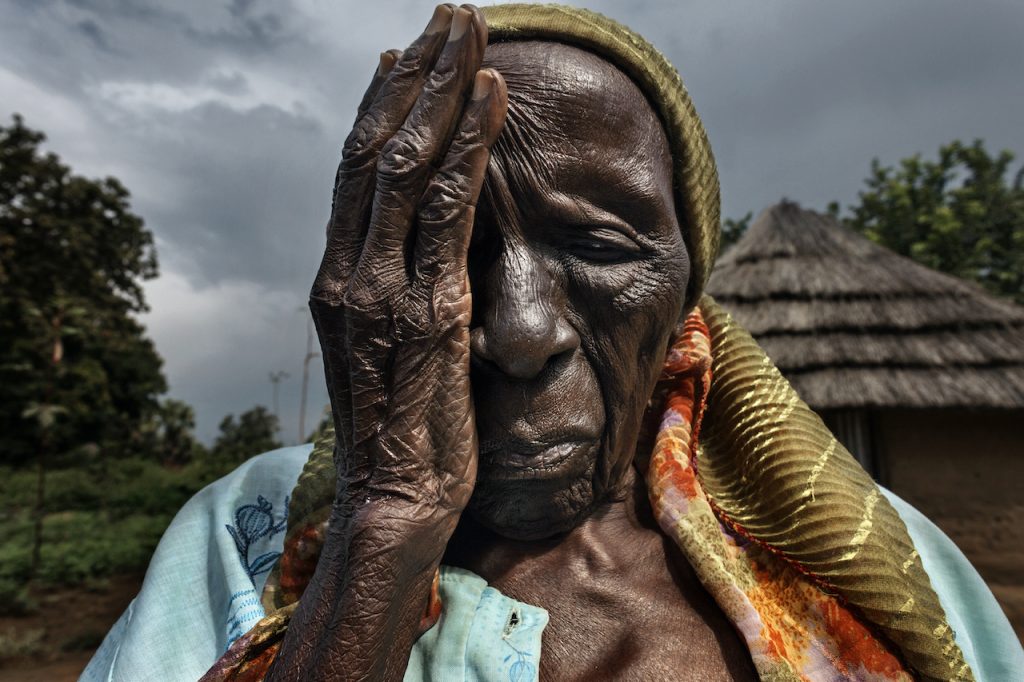 South Sudan, Hai Matara village. Tereza Kenge, 62 years old in front of her hut. Janet has multiple disabilities, as she is both visually and physically impaired. She cannot move on her own and must use a wheel-chair. She is taken care of daily by her daughter Agnes.

Tereza, a 60-year-old woman who is blind and has mobility problems, is photographed in front of her hut in Hai Matara, a village in South Sudan which because of the civil war that has destroyed her country she cannot leave. Titled ‘Strength in Fragility’, the image of Tereza is one of five winning entries to FOCUS: Philanthropy, a Europe-wide photo contest organised by Dafne that tells visual stories of the people behind philanthropy and which is being showcased by Alliance during 2021. In South Sudan, the Nando and Elso Peretti Foundation has since 2017 allocated €2.5 million to protect displaced persons and refugees, to ensure basic medical care, food security and education.

Alliance magazine speaks to Sara Tescione and Silea Pio di Savoia of The Nando and Elsa Peretti Foundation to find out the story behind the photo.

What inspired you to get involved with FOCUS: Philanthropy?
2020 was an unsettling and challenging year for everyone, in every way, all over the world. At a time when the pandemic was pushing us, like many other philanthropic foundations, to question our funding practices and direction, FOCUS: Philanthropy seemed an opportunity to contribute to a broad and open reflection on the role and responsibilities of philanthropy in times of global crisis. The visual narrative core was an important incentive. Images often trigger reactions in a more powerful way than words. Attention to visual communication is one of the many legacies left to us by our founder, Elsa Peretti. Gifted with great forward-thinking intuitions and visual sensitivity, she urged us not to underestimate the power of images and the importance they have in conveying messages in a direct and unique way.

When you think of philanthropy, what comes to mind?
Like all human endeavours, philanthropy can be many different and even contrasting things. When exercised with courage, integrity, vision, and responsibility, it can be a bridge builder, channelling resources across groups to create new opportunities to empower marginalized communities and individuals to address inequalities and promote fundamental human rights.

The pandemic has revealed how interconnected we are, while simultaneously showing the many divides that still remain to be bridged all over the world. Philanthropy now has an important role to play to ensure that the future that is built after this global crisis is as inclusive, equitable and sustainable as possible.

How did that inform the submission and or the commissioning of your entry?
We hoped our entry could turn a new and much-needed spotlight on South Sudan. The Foundation’s ongoing humanitarian commitment to the people of South Sudan started in 2017 when the country, ravaged by years of civil war, was on the brink of a terrible famine. Over the years, we have supported actions to protect refugees and displaced persons, food security, healthcare and education efforts across the country. Providing relief in conflict situations poses several challenges and ethical dilemmas. The number one priority for philanthropy should always be to ensure that the funding contributes to the solution and not the problem. From the outset of our engagement with South Sudan, we have addressed the issue of how, as a small private foundation, we should step into a complex and protracted humanitarian crisis in a responsible way, questioning about how to increase the positive social and life-saving impact of our grants, minimising harm as much as possible.

South Sudan is first and foremost a protection crisis that still threatens the life, safety and well-being of millions of civilians. They need to have their dignity and human rights protected.

It is tragic to see the past continually repeating itself. While some progress has been made in implementing the latest peace agreement, UN agencies say that people in Sud Sudan are again one step away from famine. Approximately 7.2 million South Sudanese are nowadays experiencing severe food insecurity due again to sporadic violence, extreme weather and the economic impact of COVID-19. This is the time for philanthropy not to lose focus on international solidarity.

What were your motivations behind capturing this story in particular?
The photo we selected was taken in the field, capturing one of the main gaps in the health response in South Sudan, where decades of direct fighting and insecurity have created a new generation of people with disabilities. People that are disproportionately affected by the conflict and have been further marginalised and excluded by lack of access to key services.  To help address this gap we have supported Light For The World in developing and delivering comprehensive training, advisory and mentoring services on gender-sensitive disability mainstreaming to UN agencies, international and local NGOs, providing food and non-food items in the country. At the same time, support was given to provide, among other things, eye care services in and out internally displaced people’s camps to individuals whose daily life is severely affected by visual impairment. Trachoma, cataracts and other eye related diseases and injuries pose a great threat to the welfare of people and it is one of the major disabling factors in camps and host communities. In particular, women with disabilities who live in camps in South Sudan are doubly marginalised, coming last in many ways. They are the last to reach the refugee camps, to access food, sanitation and care or to move freely.

What key messages do you want to portray through this image? What did you want viewers to take away?
We titled this photo ‘Strength in fragility’. As a woman with multiple disabilities who lives in a situation of armed conflict, Tereza belongs to the most fragile among the fragile. And yet, this image conveys a sense of strength and dignity which powerfully reconnects us all to the fact that despite all challenges, women and girls in crises are, by necessity, resilient and resourceful. We really wanted viewers to take away both Teresa’s vulnerability and strength to reflect upon the fact that when women are not left behind, and are included in humanitarian action new opportunities for women’s empowerment arise and their entire community benefits from it.

Luca Catalano Gonzaga, the talented photographer behind Tereza’s image, has been collaborating with the Foundation for ten years, documenting many of our projects in various countries across the world. He came back from South Sudan with a series of beautiful and powerful photos, which we used to make sure that that stories like Teresa’s could be told and never forgotten.  When we first promoted Tereza’s photo on our social media platforms the reactions were multiple. Pain, beauty, resilience, injustice, sadness, strength were some of the words used by the people who commented on the photo.

Images demand and facilitate identification with what you see and visual storytelling is now used across the board and produced in very professional ways. We need to balance the need to support actions where they are most needed and to reach out to a wider audience, the same audience we need to engage to arrive at more structural changes.

What advice would you give those aiming to have more impact through visual storytelling?
The quality of the images plays a very important role in shaping the message you want to convey in your visual storytelling and it is important to invest in professional photography, making sure the photographs shared both on online and offline communication campaigns have a consistent and clear visual identity.

Good storytelling is about making intangible things feel tangible. Visual narratives can be incredibly effective at creating a sense of emotional connection in the audience but if the goal is to spur meaningful change, then the most impactful stories are those that engage people both emotionally and cognitively, offering them new ways of thinking about things. To sensitise and raise public awareness, there is no need to insist on strong, shocking and disturbing imagery. Communication can be ‘non-violent’ and still being impactful.