Singapore’s Temasek Trust has launched the Philanthropy Asia Alliance, a not-for-profit initiative aiming to catalyse collective action for a better world and prime Asia as a force for the greater good.

The new organisation is supported by a core of members, including the Gates Foundation, Dalio Philanthropies, Li Ka Shing Foundation, four companies of Sinar Mas, and Indonesia’s Tanoto Foundation, who have together committed $200 million for the Alliance.

This includes a commitment of US$100 million from Temasek Trust to underwrite the setting up of the Alliance’s infrastructure, and build capabilities to forge partnerships, develop knowledge, and catalyse calls to action. The World Economic Forum has also joined as a strategic partner. 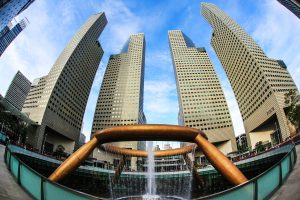 The Fountain of Wealth in front of the Temasek building on Temasek Boulevard in Singapore. Photo credit: Shutterstock

‘The Philanthropy Asia Alliance signals changes we are seeing in the philanthropy ecosystem in Asia. The readiness to collaborate, bias for action, and new funding models mean our pooled resources will be flexible and nimble as we develop solutions that can scale good in Asia. I thank our founding members, as well as other pathfinder partners and supporters, for their vote of confidence and our trust in each other to uplift Planet, Peace, People, and Progress,’ said Ho Ching, Chairman of Temasek Trust.

Asia is a vibrant and diverse region with 60 per cent of the world’s population. Its scale and development profile present considerable and unprecedented opportunity. Yet, it is also a region with vast economic inequality, variations in human rights provisions and pressing social and environmental issues, making it a natural testbed for new philanthropic models to deliver impact at scale.

The concept of an Alliance was prompted by calls for a more sustainable effort to address today’s complex challenges by mobilising resources, capabilities, and domain expertise in a more coordinated and outcome-focused way to develop Asia-specific solutions.

Other news from the Summit includes commitments to climate action and sustainable communities, a focus on inclusive and accessible education, and making healthcare more resilient.

The Summit is organised by Temasek Trust and Temasek Foundation, and 2022’s event was the second annual conference.

*This article was updated on 18 October to clarify the relationship between Temasek, Temasek Trust and Temasek Foundation.