The fourth edition of the BNP Paribas Individual Philanthropy Index has been released.  It measures and reflects the commitment of philanthropists in four regions – Europe, Asia, the Middle East and the United States. The Index is derived from a survey of 457 high net worth individuals in the four regions, each with investable assets valued at $5 million or more, and was conducted by Forbes Insights in 2015, between October and December. 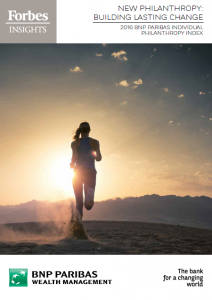 The 2016 philanthropist’s profile:
‘Health’ is their top cause, with the exception of Asia choosing ‘Environment’. They are very keen on working with others, whether it is with other philanthropic organisations (54 per cent) or individual philanthropists (53 per cent). From 13 per cent in the Middle East to 26 per cent in Europe, 28 per cent in Asia and 38 per cent in The United States, they plan to leave at least one third of their fortune to charity.

The 2016 Theme ‘Creating Lasting Change’:
Achieving a sustainable outcome is one of the top motivations of Philanthropists (41 per cent). The main outcome they seek to achieve is a sustainable program/initiative that provides ongoing assistance (70 per cent). That is followed by eradicating the problem completely (68 per cent) or create self-sustaining program such as teaching skills, entrepreneurship (45 per cent).

Securing steady, ongoing funding (70 per cent) is thus the most favoured method of financing. This is followed by creating a self-sustaining organization (57 per cent), or a charity that can make a profit and keep it going.

Impact Investing (54 per cent) and Collaborative Philanthropy (53 per cent) are considered as the top trends in achieving sustainable outcome.