A new report from Shake the Table and The Bridgespan Group has highlighted the untapped potential of feminist movements, calling them ‘powerhouses for social change’. To support these movements, the report’s authors call on philanthropy to invest an additional $6 billion by 2026 to ‘hold ground against the anti-gender movement and gain traction in shifting power’. 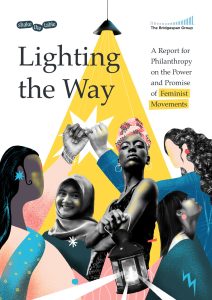 Highlighting feminist movements around the world, the report shows the real-world success of these movements to realise crucial gains in reproductive rights in Argentina, Ireland, and Mexico; support domestic workers in Mali, Mexico, and the US to secure better wages and working conditions; and bring an end to an abusive police squad in Nigeria.

According to an analysis by Candid and the Association for Women’s Rights in Development, in 2017, less than one per cent of total foundation giving was directed to women’s rights organisations.

‘In the United States, for example, where women’s rights and democracy itself are under sustained attack, women of colour and feminist movements are holding the line, resisting authoritarianism, and fighting for the rights of all,’ said Pamela Shifman, Shake the Table founder, president of the Democracy Alliance, and one of the study’s co-authors.

‘Trusting and investing in their work is our best hope for a just, equitable, and multiracial democracy for everyone.’