A stick in the spokes of the funding hamster wheel

‘Where is the space for critique and analysis of foundation practice.’ Andrew McCracken, CEO, Community Foundation Northern Ireland

Many of the foundations I spoke to at the ACF Conference 2018 described how the churn of funding has left them with little headspace to truly innovate. The process, as one delegate described it, is ‘…call for funding, review application, approve grant, measure impact – copy, paste and repeat every three years.’

In addition, 32 per cent of attendees said their biggest challenge was lack of resources, which potentially turns the squeeze into a strangle. So could the ACF conference serve as a stick in the spokes, so to speak, in the hamster wheel of funding?

‘Throughout my time working with foundations, there seems to have been a persistent rhetoric that we need new solutions for new times, and new partnerships to face new problems. A decade on from the financial crash, this still seems to be the case. It has felt like a constant process of adaptation to new normals.’

However, Mack did also acknowledge foundations are forcing a shift in attitudes.

‘I am seeing the debate move towards how best to embrace differences in the service of a common goal. I am increasingly hearing foundations ask how they might use their independence of resource to work in productive tension with other actors.’ 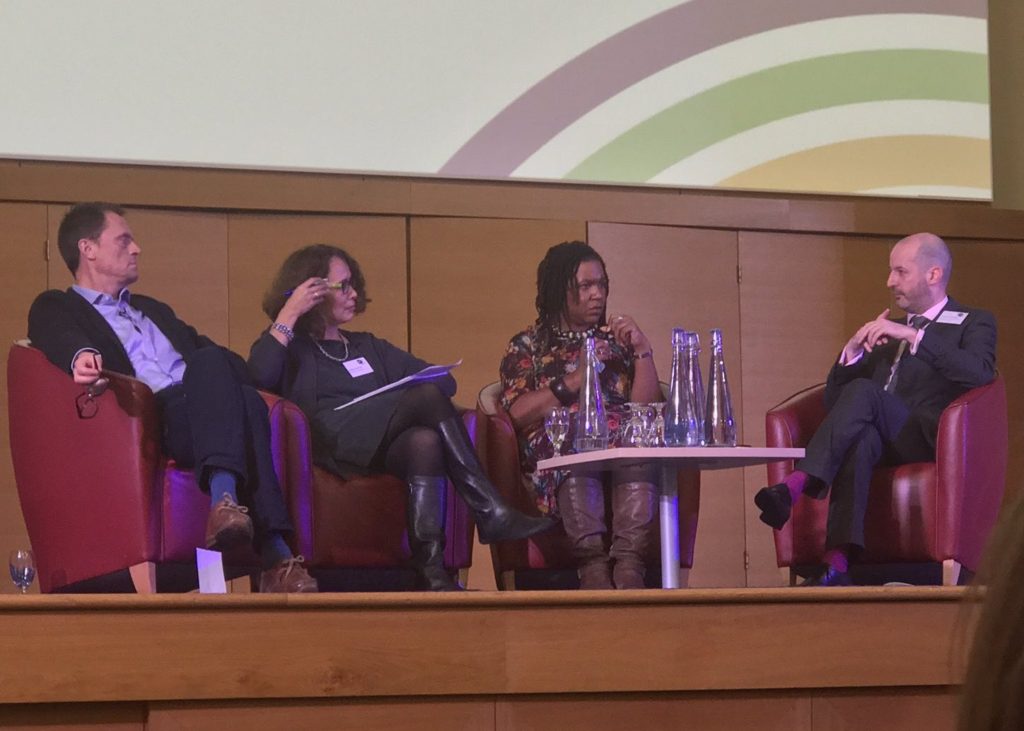 The thought of positive tension sparked curiosity with delegates, and the gauntlet was well and truly laid by Matthew Taylor of the RSA as we moved into the opening panel discussion.

While considering how to address the spatial inequality in the UK, which Taylor stated is wider than any other country, he asserted, ‘Foundations can’t really think it’s that bad, because if you did you’d be much more radical and more willing to collaborate.’

Is it getting hot in here? Provocative q&a session at the #ACFConf with @RSAMatthew challenging foundations to be as creative, radical and inventive as we should be to make meaningful and systematic changes.

Borders, Barriers & Boundaries (or the three Bs) was this year’s theme and after delegates were asked during a break to reflect on the invisible ones that affect them, it seemed to heighten the senses as the discussion progressed.

Ruth Ibegbuna of the Roots Programme, and Professor Bridget Anderson of Bristol University, added to the visceral picture being painted on how behaviours and practices have contributed to the three Bs both here and internationally. Andersen, who is professor of mobilities, migration and citizenship, challenged what we mean by ‘migrant’ and ‘migration’ and how the framework in which they are understood has warped their meanings: ‘Migrants are stigmatised, poorly defined and lacking visibility, and it is often wrongly assumed that attacks on the rights of migrants are good for citizens.’

Ibegbuna started with the State. She questioned the lack of critical thinking taught in state schools compared to private schools – a microcosm of the boundaries between class communities in the UK and how it creates huge barriers in one’s ability to address the problems they are closest to.

As the challenges were offered, so were the solutions. In a rammed alcove away from the main stage, Selina Nwulu from 2027 shared how they’re addressing the behemoth problem of diversity. Depsite research from the ACF stating 99 per cent of trustees are white, interestingly only 21 per cent of the delegates answered that lack of diversity as their biggest internal challenge.

2027 is a radical programme to get talented frontline workers from working class communities into decision-making roles in trusts and foundations, shaking up the class, ethnicity and gender imbalance of foundation boards and staff by 2027. After the launch of the research earlier this year, Selina wrote: ‘Historically, change has happened with lived experience leaders at the helm, it is inconceivable that landmark changes within gender, racial and LGBTQI equality, to name but a few, could have happened without the leadership and drive of those directly affected.’

As well providing funders with plenty of space to reflection, #AcfConf should be praised for providing pockets of space for practical advice. The Treebeard Trust and Social Finance UK shared their approach to systems change as a small foundation to an enthused mix of foundations who were clearly passionate about their work and determined to create a big impact through small grants. As one attendee tweeted: ‘Simple but powerful – funding a space for people working to make change to convene #ACFConf with @treebearstrust and @socfinuk’

Hopefully, one more funder has stepped off the wheel, intent on innovating.