Too little, too late? The growing urgency for philanthropic leadership 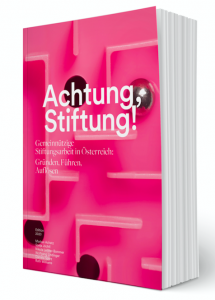 The Austrian Foundation Association has published ‘Achtung, Stiftung!’ or ‘Attention, Foundation! Non-profit foundation work in Austria: establish, lead, dissolve’, a practical handbook that is the first of its kind in Austria. The title, which was developed by Sonja Jöchtl, Executive Director of the European Forum Alpbach Foundation, and Ruth Williams, General Secretary of the Association, was presented at a press conference in Vienna earlier this week in which demands for an improved framework for non-profit founsations were presented to politicians.

Jöchtl and Williams worked together on ‘Attention, Foundation!’ with the experts of LeitnerLeitner and LeitnerLaw and sets a benchmark for contemporary best practices in the work of non-profit foundation.

In Austria, the network of foundations is currently undergoing a radical change with currently more than 700 non-profit foundations providing €70 million for social causes annually – and the sector is growing.

‘Non-profit foundations cannot and do not want to replace the social state. They, however, enable sustainable help, provide complementary impulses and set a particular emphasis on the development of our community,’ Williams said. ‘Foundations help victims of violence as well as homeless people. Foundations are active in the field of emergency relief or support the construction of schools, and are involved in climate and animal protection. But even now, in times of crisis, non-profit foundations are doing valuable work when it comes to researching Covid-19 and fighting its social consequences.’

The Austrian Foundation Association hopes that the new practical handbook will provide some guidance for actors in the Austrian sector. For more information on the handbook, visit: achtung-stiftung.at.