According to the just-released Africa Sustainable Development Report, Africa is only halfway towards achieving the SDG goals and targets by 2030. 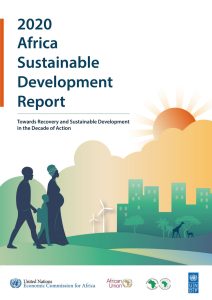 Policymakers and civil society must recalibrate policies and programs if the Global SDGs are to be achieved by 2030 or Africa to meet the goals of Agenda 2063.

The crises of the last several years, including the pandemic as well as conflict and climate disasters, have had an outsize impact on progress – a recent report estimated that 97.7 million Africans were racing severe risks of hunger and malnutrition in 2020, compared with 70.5 million in 2019. A different study estimated that 30 million Africans were pushed into extreme poverty in 2020.

‘It is not an exaggeration to say that the current constellation of factors is potentially the greatest challenge confronting Africa since the independence era that began in the 1960s,’ reads the report’s Executive Summary.

The report suggests several strategic approaches for actors working to jumpstart progress on the two Agendas: