From Alpha to Omega: Choices and challenges of limited life philanthropy

With the support of the S.D. Bechtel, Jr. Foundation, The Center for Effective Philanthropy‘s new research report on limited life foundations outlined nine areas of interest, giving far more attention to the ‘how’ than the ‘why’, which is consistent with my own experience with this topic.

As I continue to write and speak on the limited life approach, I have noted that a number of foundation managers and grantees alike are more intrigued with the management of the process than with the thinking that had set the process in motion. 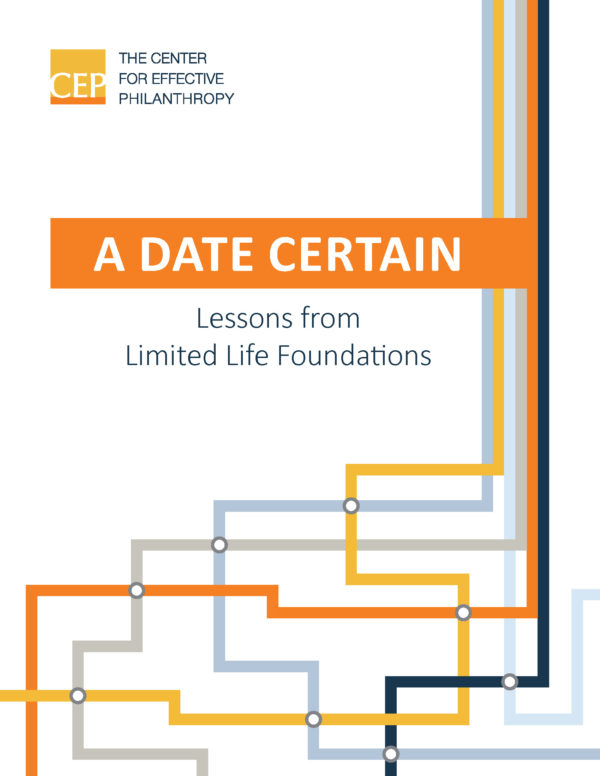 CEP found two of the nine areas of focus where there was significant consistency among the limited life foundations featured in the report. I see those two as the Alpha and Omega of the limited life continuum: the motivation for limited life and the question of establishing an archive.

The report cites ‘the desire to have a greater impact’ as the most common reason offered by donors and others for choosing an option other than perpetuity.

Some donors are more specific. Paul Brainerd, for example, ‘wanted to see change in his lifetime.” Chuck Feeney, founder of the Atlantic Philanthropies – which approved its final grants last December – has spoken frequently of the fulfillment that comes from ‘giving while living.’ While Feeney has never suggested that this is a ‘one-size-fits-all’ recipe for good philanthropy, he has not hesitated to remind others, ‘It’s a lot more fun to give while you’re alive, than to give while you’re dead.’

The report’s Alpha findings did surprise me, as I expected donor intent to appear more frequently among the rationales for spending out a foundation’s assets. It was gratifying to read Yossi Prager’s comments about AVI CHAI donor Zelman Bernstein: ‘[He] wanted the money spent by people who knew him, who understood his values, and who shared his values.’

My experience leads me to believe that Bernstein’s view is not uncommon among donors who may, however, be hesitant to emphasize personal values over public good (or to give the appearance of doing so). And it would be revealing to study the extent to which donor intent and values shape grantmaking during the spend out, especially for those foundations that choose to narrow or radically alter their grantmaking focus in their final years. How are a donor’s values and the desire for greater impact related?

Those who are pondering a limited life for their foundation may be wondering about ‘right-timing’ the lifespan. While many of those interviewed remarked that limited life produced a sense of urgency and greater focus, at what point does this heightened awareness actually kick in? Twenty years out? Ten years out? Five years out? Can you be spending out for so long that you risk the danger of being perceived as a ‘lame duck,’ as the Brainerd Foundation’s Keiki Kehoe remarks?

Conversely, establishing a too-short time frame may limit impact. In reviewing its own experience with a 10-year plan, the Beldon Fund concluded, ‘…the foundation arguably could have used a few more years.’ There is no one answer, of course, when considerations of staffing, investment policy, and grantmaking strategy are all in the mix — but it is clear that designing a foundation’s off-ramp warrants considerable strategic thought.

CEP’s report provides very helpful commentary on how best to secure, retain, develop, and ‘offboard’ staff for a limited life foundation. Although foundation decisions in this area vary based on program needs and resources, CEOs consistently describe human resource planning as the most challenging — and stressful — aspect of spending out.

I suspect that, in the absence of open conflict, considerably less attention is paid to insuring that a limited life foundation has the right board in place, and I now regret ignoring this aspect completely in my own work. CEP has added a fascinating sidebar on ‘the importance of the board and ensuring alignment’ on page 19 in the report, and here again, I encourage more exploration of this topic.

Additionally, there are a few more areas where I believe more research would be helpful. Limited life presents special challenges for family foundations, particularly if there are board members unhappy with the decision. One family foundation has agreed to seed donor-advised funds in the communities where family members reside in order to allow them to continue their philanthropy. And for place-based funders in under-resourced regions, spending out demands even more attention to clear communications with grantees, to capacity building, and to potential collaborations. Similar challenges face policy-oriented foundations, as Howard Husock reminds us in his recent report.

The Omega question — to archive or not — is most welcome. It is a question rarely answered in the affirmative, although foundations planning on perpetuity do typically maintain their grant files internally for very long periods and may even convert them to electronic formats. Some of the largest of these foundations — Ford and Rockefeller, for example — have established official archives. Limited life foundations, however, seem to be taking special care to preserve a record of ‘lessons learned’, as the S.D. Bechtel, Beldon, and Bronfman Foundations indicate.

The Atlantic Philanthropies, the largest limited life foundation to complete its grantmaking, has designed a resource-rich website to inform and influence others about ‘giving while living‘, the various program strategies it has utilized over 35 years, and the lessons it learned. Atlantic has also given its records — paper and electronic alike — to Cornell University, where they will eventually be opened to the public. Foundation records can tell powerful and inspiring stories, and the question of whether or not to archive — like the question of limited life — is one which foundation leaders should ask… and ask again.

Joanne Florino is the project lead for the Atlantic Philanthropies Archives at Cornell University.

This article originally appeared on The Center for Effective Philanthropy’s blog on 18 April 2017. The original article can be found here.