Are we moving towards a culture of short-term relationships which hinder effective networks developing?

How do you justify network organizations in an age of social media and what is the role of networks in a time of social change? These questions and more were discussed at Alliance magazine’s Breakfast Club on 10 December, which launched the December issue and its special feature on ‘Networks and philanthropy’. In the spirit of working with networks in this sector, the event was organized in association with the European Association of Philanthropy and Giving (EAPG) and kindly hosted by their member Bircham Dyson Bell.

Harald Katzmair, executive director of FAS.research – Understanding Networks and guest editor of this special feature, expanded upon his feature article, saying that networks function based on money and meaning – also described as ‘values’ and ‘value’. Katzmair describes money as being the infrastructure of transactions between people or organizations. However, without a social element to transactions, these have no meaning, which is crucial for the development of a network. 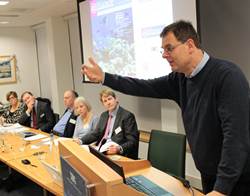 Trust is essential for effective networks to develop – something which takes time to develop and requires deeper interactions between people. If networks are just driven by short-term transactions, trust will not emerge and no deep conversations will happen. Looking at this in terms of philanthropy, funders control the dimensions of their relationships with partners in terms of the amount and duration of grants. Grants over a longer period of time will lead to increased interaction between partners. Yet if, as Katzmair believes, the world is moving towards shorter relationships, these deeper conversations may never happen. He suggests that 3-5 years is an ideal timeframe for building resilient networks that have a structure where new ideas and solutions can emerge.

This raises questions in the light of the exponential increase in the use of social media in recent years. What does this increase in short, superficial conversations mean for reliability and building up trust? Simon Weil, EAPG Chair and Partner at Bircham Dyson Bell, argued that social media is not a fitting substitute for face-to-face interaction. David Wilcox of SocialReporters.net agreed it should not be a substitute. However, he believes that people should not think in terms of ‘either/or’, but instead should use all tools that facilitate networking in appropriate ways to complement each other. He described how social media had actively helped the activities of networks he has worked with, using examples such as encouraging people to comment on Google docs to evolve a shared narrative.

However, Katzmair did outline one way in which social media can harm networks, not in technological terms but as a mindset. By its very nature, social media aligns people according to proximity and similarity. As the key value of a network is diversity of views and background, creating networks through social media can mean that we end up with communities of people who are too similar to help each other. As Sue Daniels of EAPG pointed out, networks are only valuable as long as they work.

Resilient networks not only need to be diverse but should also have the ability to learn and evolve – something that is said to be very pertinent to the philanthropic sector but doesn’t always happen when it should as egos can get in the way. This also led the discussion towards the worry that some networks can be perceived as ‘old boys clubs’, losing their diversity and imposing their own ideas to the exclusion of others who may also be working towards the same goal. 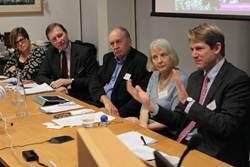 Marc Pfitzer, Managing Director of FSG, put networks in perspective by categorizing problems into simple, complicated and complex. He emphasized the need to use networks appropriately for each type when finding a solution, as they may be relevant only for more complex problems. When asked whether philanthropy can be both networked and strategic, he argued that being networked can often be strategic in itself. Pfitzer said that the nature of a network can make or break it – it is more important that it has purpose.

Pfitzer also emphasized the importance of infrastructure to the success of a network; in his view transparency and measurement are essential but these need dedicated people for a network to monitor and share information. Daniels raised the question of who should pay for this, as core funding for membership organizations and associations can be difficult to obtain. Yet it appears that even in this technologically networked age, there is still value in organizations that enable people to gather to have meaningful interactions.

With all this talk of the difficulties of creating effective networks and running meaningful membership associations, Alliance editor Caroline Hartnell said that she was glad she did not have to run a network. But as one attendee said afterwards, surely Alliance has created its own network. With a mission of bringing together philanthropists, social investors and those working for social change, Alliance shares information with subscribers through the magazine, then offers opportunities to have deeper discussions with a diverse range of people through events such as the Breakfast Club. So this discussion about networks emerged from a network itself.

For those who missed this event, a full audio recording of this discussion can be found on youtube.

If you would like to join Alliance’s network, start by reading the many articles on the Alliance website and continue by taking out a subscription to the magazine.

Were you at the Alliance Breakfast Club? Don’t forget that all attendees have been offered a 20% discount on new subscriptions to Alliance. This includes unlimited access to all Alliance articles online, as well as shorter electronic publications in between the quarterly magazine. Download the Breakfast Club discount form to subscribe today!

Thanks Jenny for reporting our discussion so well, with its many dimensions. We live in an increasingly networked world, where the ad hoc and longer-term ability to connect and share with others may challenge membership organisations providing that service for fee. At a personal level, with so much information and opportunity, we have to get better at managing the knowledge we need, and building our own networks. While social networking platforms may push the ability to connect with "people like us", we have enormous scope to discover ideas and people we would not otherwise know about. What's perhaps particularly interesting is where changing organisational structures and developing personal skills intersect. It isn't either/or - any more than online/offline is a dichotomy. We need a blend. Here's the reference to the book I mentioned on the day, which explores that. Collective Action in Organizations "Challenging the notion that digital media render traditional, formal organizations irrelevant, this book offers a new theory of collective action and organizing. Based on extensive surveys and interviews with members of three influential and distinctive organizations in the United States - The American Legion, AARP, and MoveOn - the authors reconceptualize collective action as a phenomenon in which technology enhances people's ability to cross boundaries in order to interact with one another and engage with organizations. By developing a theory of Collective Action Space, Bimber, Flanagin, and Stohl explore how people's attitudes, behaviors, motivations, goals, and digital media use are related to their organizational involvement. They find that using technology does not necessarily make people more likely to act collectively, but contributes to a diversity of "participatory styles," which hinge on people's interaction with one another and the extent to which they shape organizational agendas. In the digital media age, organizations do not simply recruit people into roles, they provide contexts in which people are able to construct their own collective experiences."