In Australia, mining magnate and philanthropist Andrew Forrest and his Minderoo Foundation have acquired ten million coronavirus tests at AUD $320 million (USD $208 million) for the Australian public. The Foundation was later reimbursed by the government for the expense. 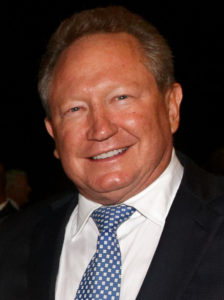 Andrew Forrest in 2017. Photo courtesy of the Australian Department of Foreign Affairs and Trade via Wikimedia Commons.

Australian Health Minister Greg Hunt expressed his appreciation for Forrest’s assistance in procuring the kits, saying, ‘This will multiply our tests between now and the end of the year by almost 20-fold.’

As of the end of April, Australia had been able to conduct just over half a million COVID-19 tests for the nation of 25 million. Owing to a massive global demand as the coronavirus spreads across the globe, countries have been facing challenges when it comes to getting the materials needed for widespread testing – one of the key measures needed for governments to be confident in easing lockdowns.

However, the COVID-19 tests secured by Forrest and his Foundation so far have not been used in reaching the ‘20-fold’ increase in testing for which the Health Minister claimed they would be crucial. A report from the Guardian found that most state and territory governments are not using this type of testing kit. The tests, rather than being sent to the medical frontline, have been put in a national medical stockpile.

Bridge between government and private suppliers

The Minderoo Foundation worked out a deal with Beijing Genomics Institute (BGI) for the test kits. According to the Health Minister, Forrest and his wife ‘have been a bridge’ between the Australian government and private suppliers.

BGI had received higher offers, as well as outside influence to accept other deals, said Forrest; however, they maintained their agreement with the Minderoo Foundation. ‘I am very grateful for that,’ Forrest commented.

At the official event announcing the deal for testing kits, Forrest reportedly surprised the Health Minister by inviting China’s consul-general for Victoria, Zhou Long, to speak alongside him. The Australian Foreign Minister’s Office and the Prime Minister’s Office were not informed that Zhou would be in attendance at the event, which was held at the Commonwealth Parliament Offices in Melbourne.

China and Australia have been increasingly at odds, following lobbying by Canberra for a global independent enquiry into COVID-19, and accusations from Beijing that Australia has been pushing US interests in the region and a threat that Chinese consumers could abandon Australian brands.

Unusual arrangements but an unusual time

The deal between the Minderoo Foundation, BGI and the Australia government is an unusual one. In most cases, governments are purchasing testing equipment themselves, rather than through a third party. And in situations when philanthropy is involved, reimbursements are not often a part of the deal.

Commented Industry Fellow at the Centre for Social Impact at Swinburne University of Technology Krystian Seibert: ‘The collaboration seems like a rather curious and interesting arrangement. Given that the Australian Government is reimbursing the Minderoo Foundation for the cost of the tests, it’s not that clear what the ‘value add’ from philanthropy is. But it could be that Mr Forrest was able to act faster and more nimbly, using his business connections and going through channels which aren’t as easily accessible to the Government. Some further detail on the arrangement and its background would be helpful, so we can understand it better.’

As the global health crisis wears on, the necessities needed to fight it, such as testing kits, personal protective equipment, and ventilators, can be hard to come by – a problem which has led to some unusual solutions. In April, two of China’s wealthiest philanthropists donated 2,000 ventilators to New York state, mostly bypassing the U.S. federal administration in the deal. In another instance in Maryland in April, Yumi Hogan – South Korean by birth and the wife of the state’s governor – navigated a deal with South Korea to secure half a million testing kits for her state. Hogan is a professional artist, not a diplomat or politician.

Forrest is an Australian businessman who was the CEO of Fortescue Metals Group for many years; he is currently a non-executive Chairman. During his career in mining, Forrest made significant investments in China through iron and ore.

According to Forbes, his net worth is $8.8 billion. Forrest and his wife, Nicola, have worked through their Minderoo Foundation on education and support of Indigenous Australians. The Forrests also have another foundation, the Walk Free Foundation, which focuses on ending modern slavery.

Elika Roohi is the Digital Editor at Alliance magazine.