AVPN 2016: A Conversation with Bernard Chan

From May 23 to 25, the Asian Venture Philanthropy Network (AVPN) held its annual conference for the first time in Hong Kong, away from its home base of Singapore. Among the 130 featured speakers from around the world, one of the most anticipated was Mr. Bernard Chan, a pioneer in advancing social sector work in Hong Kong.

Mr. Bernard Chan is Deputy to the National People’s Congress of China, non-official member of Hong Kong’s Executive Council, and former member of Hong Kong’s Legislative Council. In addition to governmental roles, Mr. Chan is active in philanthropy and social impact initiatives. He currently serves on the governing board of the Alibaba Entrepreneurs Fund in Hong Kong and Chairs the Hong Kong Council of Social Service.

On AVPN 2016’s first day, Mr. Chan delivered the Members Day Keynote Address. He highlighted the opportunities and challenges to be found in Hong Kong at the intersection of business, government policy, and social impact efforts.

I had a chance to talk one-on-one with Mr. Chan after he addressed the AVPN audience. What follows are highlights from our conversation. Worth noting, it was a special honor for me, since I was a recipient of a Chan-Sophonpanich Award, a student scholarship award established more than 20 years ago at Pomona College by Mr. Chan ’88 and his family. 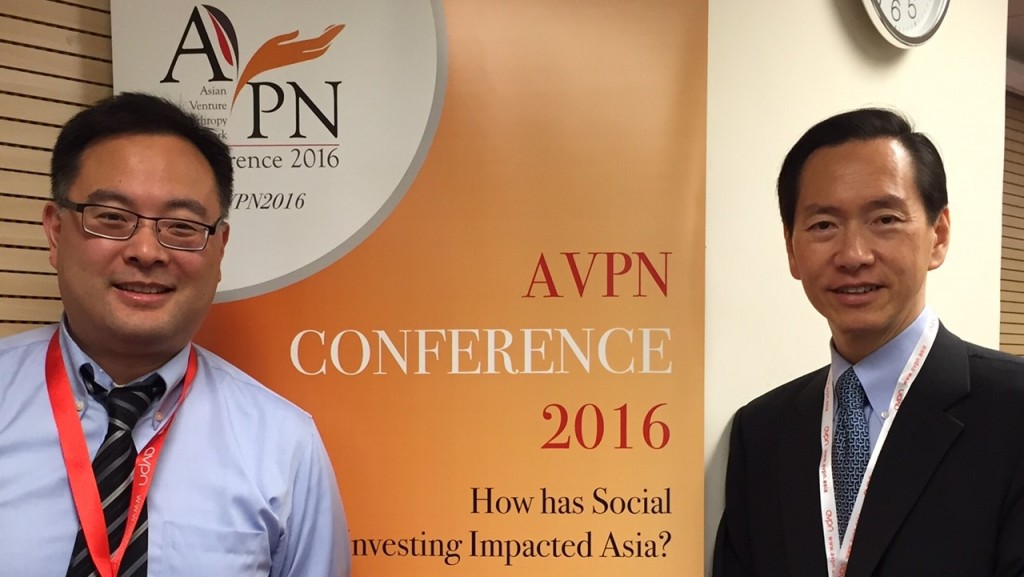 Victor Kuo on the left and Bernard Chan on the right.

Victor: Thanks Bernie for talking with me. You and your family helped me in a very direct way when I was in college. What was your motivation for setting up the Chan-Sophonpanich Award? What did you intend the impact to be?

Bernard: I was not in very good health during my time at Pomona. I spent a lot of time during the first two years in the hospital, and it got me motivated to have a purpose. Looking back, it was a turning point in my life. Eventually, I majored in Studio Art and produced an art book. I thought the use of proceeds from that book could benefit the community. I looked and there were not many student supports for ethnic minority students at the college. And being an international student from Asia myself, I noticed there were so few of us on campus. That was my intention. To enable the college to recognize academic achievement and community service by under-represented students. I thought this was a way I could serve society.

Victor: I have to personally say ‘Thank you.’ I consider myself a product of that kind of hope and aspiration. So ‘Thank you!’

Bernard: To be honest, back then, I didn’t know how long that scholarship award would last! I’m glad to get to see what you are doing!

Victor: As you know, there are increasing numbers of wealthy Chinese not just in mainland China, but all over the world. What could help them accomplish more effective and transparent philanthropy? Like with Jack Ma and Alibaba, there’s a lot of interest and attention but what needs to happen?

Bernard: You know, two months ago, I gave a speech at Tsinghua University in Beijing. I was there for the National Congress Meeting. I gave a lecture on family business. Many asked about sustaining a family business as it goes on to the third or fourth generation. What surprised me was that there in China, they are actually still experiencing transitions from the first to second generation! And the sort of wealth we’re talking about with these people is magnitudes larger. Also, a new challenge is that today, you and your business can be anywhere in the world. You can live anywhere in the world. Traditional businesses and their approaches are gone. So for the next generation, there is a journey of self-discovery, and they need to be well-equipped to know how to deal with these things. They need the right know-how to find a purposeful life.

Also, China and philanthropy are different now. Some philanthropists think that they don’t want to deal with the publicity of giving. But today, being a philanthropist is not as simple and straight-forward as it may have been before. There are all kinds of expectations from the community, and it’s complex. It’s a ‘happy problem,’ but someone needs to teach them. These are first generation entrepreneurs, and they may be good at business, but can they teach the next generation about philanthropy?

Victor: There seems to be an increasing emphasis on impact. (AVPN 2016 is titled ‘How has social investing impacted Asia!) How do you work with philanthropists to move beyond family values, religion, or philosophy, and to see impact as a motivation for giving?

Bernard: For the last 10 years, people have been talking about impact and social returns. It all sounds very good, but what is still lacking are proper measurement tools. How do you measure impact? As I mentioned in my earlier presentation, NGO’s are skeptical about using a business approach! But seriously, there has to be common language, a common ‘yardstick,’ that is acceptable to both sides – not just for the givers but also for the recipients. Even for government projects, we are facing these kinds of challenges. Both sides are doing much, but there’s not enough communication and dialogue. I fully agree that social impact philanthropy is the way forward. But in order to enable that, we need the methodology behind it. How do you count? At the end of the day, how do we know that we are making a difference? I know it is not easy, but it can be done.

Victor Kuo is founder of VK Global Advising. He is a Seattle-based philanthropy advisor and regular contributor to AVPN meetings. He graduated from Pomona College in 1992.